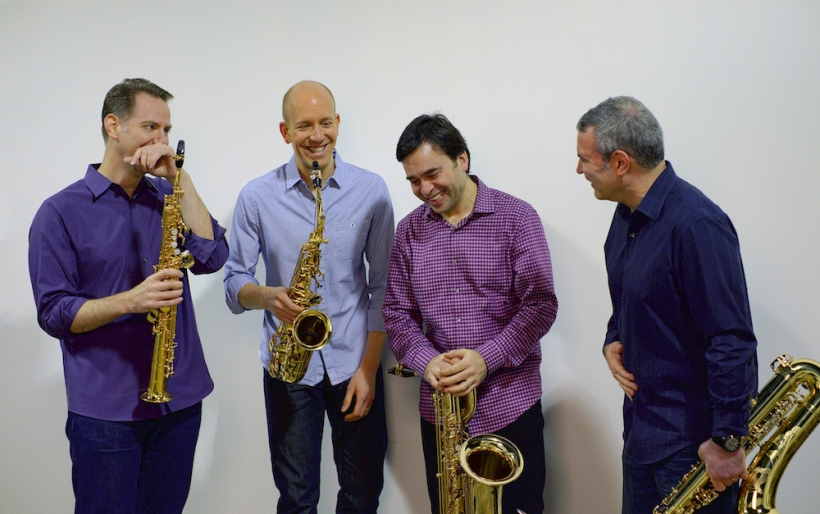 While it’s certainly not a new trend, it was particularly evident seeing May’s musical offerings in Philly that the lines between what’s considered jazz and classical or new music have never been blurrier. The highlight of last month’s calendar was Bowerbird’s landmark Julius Eastman retrospective; a last-minute program change on the final night led to the reprise of Eastman’s “Thruway” in a version that sounded radically different from its earlier performance and thus revealing the amount of spontaneity and chance in the piece. More explicitly, the first iteration followed Eastman’s instruction that a jazz band play from offstage, leading to scraps of Monk seeping into the music’s quieter portions like a neighbor’s stereo through an open window. Then there was the two-night Ars Nova run that featured Ken Vandermark and Nate Wooley playing a long-form piece inspired by John Cage, followed by John Hollenbeck’s Claudia Quintet playing short compositions that were often complexly through-composed.

Need more evidence? It’s all over this month’s jazz schedule as well. This Saturday, in fact, the PRISM Quartet will continue its Heritage/Evolution series at the Painted Bride, in which the classical sax foursome has invited some of jazz’s most forward-thinking saxmen to compose new music for the ensemble and themselves. This weekend, they’ll premier “Super Sonix,” penned by tenor sax titan Joe Lovano. In keeping with the hybrid tradition, the piece pays explicit homage to “Third Stream” pioneer Gunther Schuller as well as the radically innovative Ornette Coleman.

One night earlier, on June 2, pianist Uri Caine will return to Matt Yaple’s invite-only @exuberance series (it’s easy to snag an invite – just shoot an email to mail@exuberancemusic.com). Since leaving his native Philly a few decades back, Caine has gained fame with his inventive reworkings of classical repertoire from Wagner to Verdi, though this show, which reunites him with local bass great Mike Boone, will reach back into his more traditional Philly hard-bop roots. Rumor has it the duo will expand into a trio with the addition of Boone’s staggeringly talented 10-year-old son, drummer Mekhi.

John Zorn has built his iconoclastic career on bulldozing genre boundaries, chopping and blending everything from jazz to grindcore to musique concrete to cartoon soundtracks into a distinctively defiant soundworld, in the process becoming one of the most prolific and eclectic composers in modern music of any definition. One of his most extensive collections of music is his series of Masada songbooks, which form the core of his “Radical Jewish Music” aesthetic. Also on June 3, Ars Nova Workshop will present Philly native Brian Marsella performing songs from the second Masada book, “The Book of Angels,” at the Art Alliance in a piano trio with bassist Trevor Dunn (Nels Cline Singers, Mr. Bungle) and drummer Kenny Wollesen (Sex Mob, Bill Frisell). Marsella, a member of Philly supergroup the Fresh Cut Orchestra as well as Zion80, The Flail, and his own Imaginarium project, recorded 16 of these Zorn tunes with this trio on his new Tzadik album Buer.

Of course, jazz and classical are not the only streams that have crossed over the course of the musics’ history. Cuban traditions have also richly contributed to the evolution of jazz, a heritage that will be celebrated by our own Terell Stafford-led Jazz Orchestra of Philadelphia at the Kimmel Center on Saturday, June 10. The big band will be joined by trumpet great Jon Faddis as well as Cuban native and former Philadelphia Elio Villafranca on piano for an evening exploring the island’s influence on Dizzy Gillespie and other influential jazz icons.