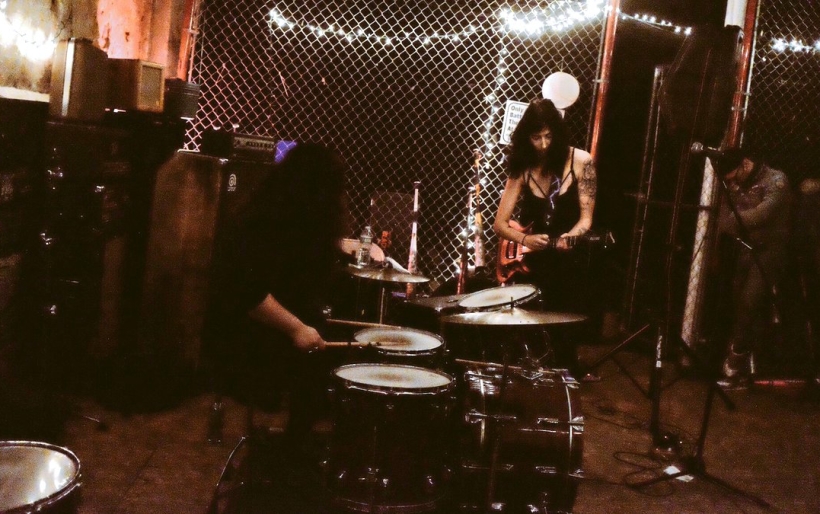 Philly is one of those cities (the only city?!) that’s able to contain, harness, and release the unbridled energy of hardcore punk and strange outsider indie rock in the form of four impactful spring festivals and still have enough left to keep the summer righteously shredded.

We came together for Electrifest (queer POC experimental music fest centering LGBT health concerns), Get Better Fest (queerpunk fest put on by the folks at Get Better Records), Break Free Fest (an event centering black and brown hardcore acts) and of course, Philly Shreds (a showcase of punk bands from all over with a heavy Philly edge), but we are still rocking, still falling into our amps in damp, sweltering basements and rolling around in the free dumpstered bagel piles at our local community centers, screaming our hearts out, shouting down The Man.

This article seeks to chronicle the continued mayhem of the Philadelphia punk rock scene, seeking out both the upstart and lesser known bands and the tried and true favorites breathing new life into their sets, as well as highlighting how truly diverse our loud rock scene is. It is exhilarating to think that our community features women, queer / LGBT folks, and people of color playing prominent roles. Sit back and let the pretzel-flavored chaos reign.

Far from being another cog in the punk machine that is their drummer Jake Smith — guitarist of eccentric screamers Knife Hits and bassist for time displaced grindcore muckrakers Backslider — Penetrode is a crypto-pop band of retro-futurists looking to kick a hole in somebody’s boombox. Their tape “Loss Adjustment” is a solid exploration of weirdo-thrashers Rudimentary Peni and proto-punk masters Death, but it’s on their split with C.H.E.W. where they really rip into your flesh and hack your database. Their singer, Bootsie, is the non-binary warrior-slash- spiritual core of the band, tackling both challenging subject matter and the audience.

Originally from Massachusetts, the two women in Ursula are at the fore-front of Philly’s agit-noise scene, playing music so distant and dirgey that most of their influences are as formidably obscure (Die Monitor Bats? MARS? A band you probably started in 3rd grade with a Speak n Spell and some pots and pans?) as their music is delightfully energetic. While dissonance is a key component of the duo’s sound, a vibrant melody snakes it’s way through each of their songs, no wave anthems all. While not exactly, like, shrouded in mystery or whatever, the ladies prefer to keep things simple — while the descriptions for two of the bands on their recent three band bill at Boot and Saddle are wrought with epic poeticisms, their listing is simply ‘URSULA.” After listening to their album Hair Salon and seeing this simmering, minimalist band bang and clatter live, that listing makes total sense.

If there’s any font or graphic design scheme on an album cover that’ll have me smashing Like faster than an aunt combing through cat pictures on Instagram, it’s the Crass Records font. But it’s 2017, not 1979, and that band’s record Feeding of the Five Thousand‘s grip on modern punk is loosening. So when you encounter that font in the wild (re: your local record shop) who even knows what the music sounds like hidden underneath those jagged, brick letters? Well, three seconds into Philly’s Spanish-screaming thrashers HUMO’s demo, all doubt of their prowess is buried under thick waves of fallout flavored guitars and distorted bass, drums that sound like orcs kicking their instruments around at a tantric sex ritual. Songs about hopelessness and death that sound ugly and pissed off are typical of punk rock, but are reclaimed by these Latinx punks in a manner that breathes new socio-political urgency to older, crustier themes. A young band to look out for.

SHEENA AND THE NOSEBLEEDS

There’s a strange magic underlying the the rollicking, transformative noise of Sheena and Thee Nosebleeds. It’s the kind of enchantment best represented by the band itself: Philly noise rockers Thee Nosebleeds came together a few years ago with the wondrous Sheena Powell as if both parties were ritually summoned. It’s been two years as a quartet that Powell’s angelic voice has managed to lift the band out of the darkness. But don’t mistake their majestic presence for benevolence: the band manages to destroy every stage they play on with a MC5-ian ferocity envied by many dormant crust rockers.

Through the thick vines of wiry guitars and jagged rhythm, Whipworm’s Discharge-meets-Riot Grrl furor has found a way to remind me of the punk I came of age listening to and participating in during the ever-pined for 1990’s. It’s wild, unapologetic in its radical sentiments — best expressed on the terrifying track “Good Guy” where the singer makes it clear that the lack of support for abuse victims has been a prevalent issue in the scene — caustic and yet somehow immersive, somehow beautiful.

Confession: there have been more start-stops to this bio than there are in Fugazi’s entire post-Repeater catalog. “Sour Spirit are a cross between Sun Ra and Lightning Bolt that….” hmm, no. “Sour Spirit, an entanglement of the fuzz ‘n bang of pre-fame grunge and a Yoko Ono unmastered mix tape…” Nah, I’ve got it: Sour Spirit are two brothas who are brothers making waves of harsh noise with free jazz flourishes, playing within and in spite of traditional rock structures. Meets Unwound. And though there are flashes of sounds that recall something that feels familiar, that familiarity is not nostalgic, it’s primordial. See them live, change your life.

A band whose music rings out like crisp church bells in the lotus garden where sprites and spirits play, Downtrodder has been wreaking havoc on south Philly’s punk scene, injecting that community with a much needed sense of social accountability and musical acumen and genre-dexterity (I’m looking at you, drunk punks!). Anchored by singer / Steven Universe fanatic Kate Meyer’s deeply sincere vocals and brilliant, timely lyrics that ride the poly-rythmic, Ink and Dagger-meets-Lifetime-esque backbeat , the ‘trod squad present a package that’s decidedly more hardcore than punk; still there’s no denying the ethos. The band plays festivals, basements, community centers and dive bars with the best and worst of them, still managing to uplift us all with their propulsive sound.