Offa Rex is the new collaboration between The Decemberists and English folk singer-songwriter Olivia Chaney, and if the crowd was expecting to hear a Decemberists-heavy set geared towards fans of the beloved indie rock band they were in for a surprise. The set focused on Offa Rex’s debut album The Queen of Hearts, released July 14th on Nonesuch, but did include one cover of a Decemberists song, “Rox in the Box.” The billing that always seems to accompany Offa Rex is the parenthetical “(The Decemberists + Olivia Chaney),” but it is now clear that this is more informative than descriptive.

The collaboration was brought to life out of Decemberists’ Colin Meloy desire to create an Albion Band-backing-Shirley Collins-type project, and that’s exactly what was realized as the Decemberists act as the backing band for Chaney’s clear, haunting vocals. The Queen of Hearts reimagines classic folk songs found in the British Isles, and the role of 60’s folk hero troubadours appears to be a natural one for The Decemberists to step into, simply eliminating the “alternative” from their “alt-folk” classification.

I half expected them to walk on stage wearing period costumes, but there was no such luck. Instead, the audience was treated to a nearly hour-long set filled with folk music that transformed the BB&T Pavilion into an Olde English pub. The set was originally scheduled for Wiggins Park, where Offa Rex would close out the day before the BB&T performances began but was moved due to forecasts of severe weather. The huge space surrounding the BB&T stage swallowed a bit of the magic that Offa Rex’s sound could have created in a more intimate setting, especially for a new band that not many in the audience would have known or understood its genesis had it not been carried by The Decemberists’ well-established name.

Each track from The Queen of Hearts was beautiful, much more engaging and complete when performed live than in recording – I never thought I’d see a BB&T crowd headbanging to traditional English folk songs, but that’s exactly what happened as The Decemberists brought the rock and Olivia Chaney brought the folk (and awesome accompaniment on the harmonium). Chaney also performed one of her own tracks “Loose Change” solo, keeping the crowd absolutely silent and rapt as her voice soared and singularly filled the pavilion. 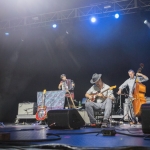 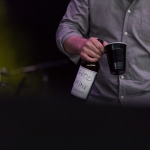 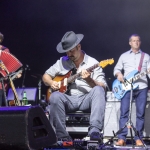 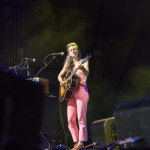 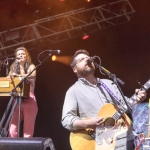 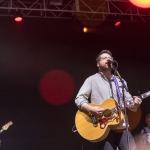