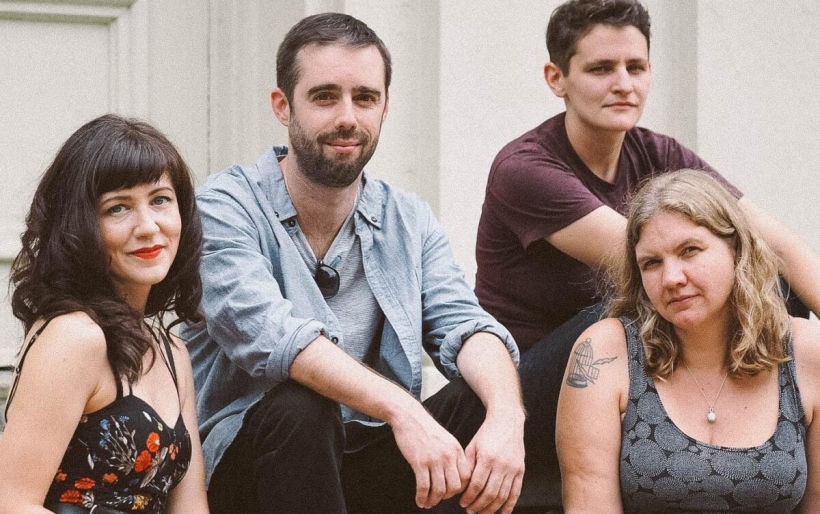 Callowhill | photo by Maura Kirk | courtesy of the artist

PREMIERE: Callowhill paints with sound on The Way Out

Callowhill is many things: a street that jogs an east-west path from the Delaware River to the Philadelphia Museum of Art and a post-industrial neighborhood just north of Center City that (legend has it) inspired David Lynch’s Eraserhead. It’s the surname of William Penn’s second wife, Hannah, who ran the state of Pennsylvania after her husband had several strokes. And it’s a four-piece rock outfit that captures introspections and emotions in a wash of interlocking guitars, overdriven tones, and drifting vocal leads.

The band is comprised of Julia Gaylord on guitar and vocals, Katy Otto on drums, John Pettit on bass and vocals and Nikki Karam on lead guitar, and they’ve been active on the Philadelphia scene since 2014. Following up on their self titled 7″, which came out in 2015, the band releases its Jeff Zeigler-recorded debut LP The Way Out on Otto’s Exotic Fever Records next week, and celebrates with a headlining gig at Boot and Saddle on Wednesday, August 30th. We’re thrilled to give you a first listen to the album today.

The bandmates bring a range of background to the project. Pettit and Karam met working in Temple’s library system — hence their tagline that proclaims Callowhill is, among other things, “for sexy librarians and their cats.” Petit was a  player in experimental psychedelic outfit Make A Rising and indie popsters April Disaster before that, and is a go-to trumpeter for artists like Joey Sweeney and the Long Hair Arkestra; Otto, meanwhile, drums in the visceral two-piece Trophy Wife and is a vet of D.C. DIY scene via the emo-tinged power trio Del Cielo; Gaylord hails from True If Destroyed, an experimental Philly punk outfit from the aughties whose recordings are criminally nowhere to be found online.

All that experience fuses into a thrilling new identity that’s sure to delight fans of Yo La Tengo, Sonic Youth, Can, and Helium; of noisepop, abstract lyrical observations, and painting with sound. As Karam says:

All four us have different backgrounds musically, and different aesthetics, and different tastes for music as fans. There’s a lot of overlap, but a lot of our reference points are distinctive. We thrive in this environment, and I think that comes through in our songs. They’re a little hard to peg, hard to describe, and that’s something we are proud of.

Listen to The Way Out in full below. Callowhill plays live at Boot and Saddle on Wednesday, August 30th, with Baltimore’s Rogue Conjurer and Philly’s Great Weights. Tickets and more information on the show can be found at the XPN Concert Calendar.