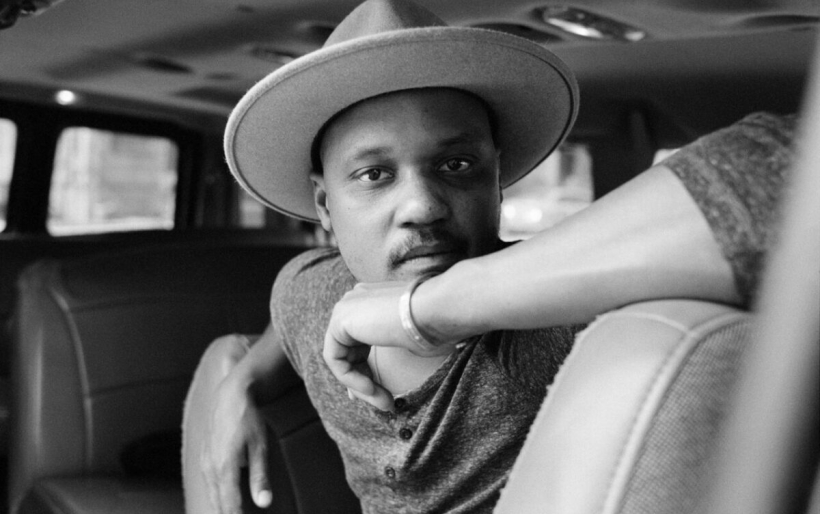 Son Little | photo by Marc Lemoine | courtesy of the artist

When Son Little sings “I got the blue magic / And I rock you so savage” on his upcoming New Magic album, there’s a grit and a swaggering gamesmanship to his voice that wasn’t apparent in past such as 2014s Things I Forgot EP and his eponymously-titled 2015 album. That strut may not even have been there when Aaron Livingston (Little’s birth name) recorded with The Roots or with RJD2 as Icebird.

Did the multi-hyphenate neo-bluesman and seemingly professional lodger (LA to NYC to Philly to somewhere in New Jersey) get that ‘”oomph” producing an EP for legendary gospel goddess Mavis Staples (Your Good Fortune)? Or writing for electro-R&B saxophonist / DJ GRiZ? Does his newfound love (or display of affection) for baseball have anything to do with this soulful gloat as he’s taken to singing the “Star Spangled Banner” before National League games?

Before Livingston heads into a busy autumn — beginning at this week’s Afropunk festival in Brooklyn, extending to the September 15th New Magic release and a two-night stand at Boot and Saddle at the month’s end — we caught up with him via phone so he could address some of these burning questions.

The Key: Let’s chat baseball since you took a shot for the Mets singing “The National Anthem” at CITI Park.

Son Little: There are infinite situations in life where you cannot explain what will happen next, and baseball captures that in a cool way. I think I’ve felt like that since I was a kid.

TK: OK, so that’s not a recent phenomenon. What about singing the “The National Anthem”? How does this happen?

SL: They got hold of “Blue Magic” and liked it as a team anthem. Initially, they want me to play it at the stadium, but somehow a conversation ensued about me singing “The Star Spangled Banner” before a game, and the next thing you know, I’m doing it.

TK: The anthem is a wriggly pitchy tune that has felled the greats. How did you handle it?

SL: You know what? There’s no real one good way to do it…unless you’re Whitney Houston, with an enormous range. And even then it’s a bizarre song, with every line being its own thing. It would be like you’re taking a poem and taking it apart, live in front of an audience.

SL: Right. No lie, though. This is the coolest thing that’s ever happened to me, but if they ask me to do it again, I think I’d be better prepared.

TK: But you didn’t do it for the Phillies.

SL: I took one for that home team. I’d easily do it for the Phillies.

TK: Why did you move to, what, Pennington?

SL:  After the first album came out, I was rootless for a little while, spending too much time in one city or another. I couldn’t bear to think of myself like that when I got home.  I needed something of my own with room and air and grass and trees. It’s not far from Philly, but just far enough off the highway to make a difference.

TK: Besides what you got from Philly can’t be measured in trees or grass.

SL: Philly made me test myself.

TK: So, what’s “Philly” on this new record? I don’t know that I hear the Philly thing on New Magic like I did on Son Little?

SL: I’ve put on a few miles these last couple of years, maybe that’s the distance you hear. But to me there’s a lot of Philly in this record, maybe more than the first. When I first got there, I got my first car– an old Isuzu Trooper. I drove around all summer listening to this all-Philly mixtape: Philadelphia International stuff from the 70s, the Dells, Delphonics, Stylistics, Blue Magic, all that. I loved that sound. Plenty of ear candy.

TK: What do you miss most about being in West Philly on a daily basis?

SL: Roti from the Trinidadian restaurant Brown Sugar on 52nd Street. If I could eat one of those a day, I would. Only $5. For awhile, that was my entire diet.

TK: What can you say about hooking up with Mavis Staples? I just spoke with her and I thought I should bow my head.

SL: I was determined to find what her voice was going into the EP, writing songs for her, but there was no way to reign that in. I think I’ve tried to approximate what her voice is – as a writer and a singer – going forward.

TK: Is there anything left of Aaron Livingston or have you given yourself over to the whole Son Little construct?

SL: I think I’m slowly sinking in to the Son Little construct. On a scale of 1 to Darth Vadar, I’m Luke after Empire Strikes Back. I only have a robot arm. Probably not evil. I’m like Neo after that epic fight in the hallway– Agent Smith has left his mark on me. That said, there’s a little Mr. Anderson left in there too. Otherwise I’d probably just sit around bending spoons with my mind all day. Son Little | photo by Marc Lemoine | courtesy of the artist

SL: Aaron and Son both dress cool, but Aaron wears sweatpants and fatigues too much.

TK: On the new album, who is “Miss Ona” and “Kimberly”? Are they imagined visions of womanhood or altogether too real?

SL: Both. Miss Ona refers to Henrietta Lacks, now famous for being the reason anyone knows anything about cancer. She died of cancer, but her organic tissue lived on to tell the tale. Kimberly was a girl in my class in third grade. No one really noticed her until they saw me holding her hand. Then other boys tried to get in between us. Pissed me off.

TK: What is “Blue Magic” VS “New Magic” VS white magic VS black magic?

SL: Blue Magic is the world’s most sustainable source of energy; it’s found in sun rays and also at the bottom of the ocean. It’s the alchemist’s method of making Gold out of lead. New Magic is just a collection of Blue Magics. About Black Magic I’d ask Carlos Santana.

SL: The Rizzo statue should stay where it is but it should surrounded by statues of The Roots, Jill Scott, and Bernard Hopkins.