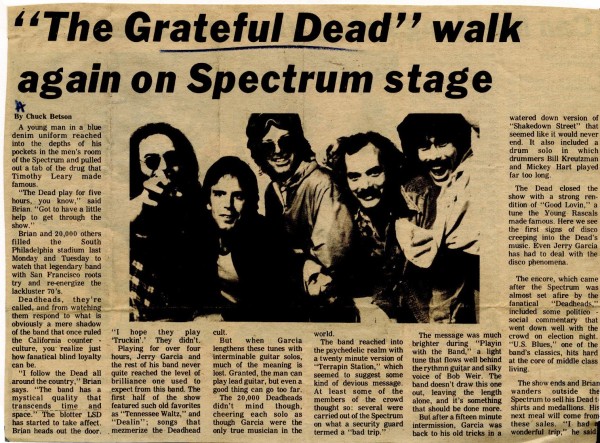 A Grateful Dead Philly concert review from November 9, 1979 | via dead.net

Listen to soundboard tapes of The Grateful Dead at The Spectrum, August 29 and August 30, 1980

Ever tried Googling “The Grateful Dead” and “The Spectrum“? It’s kind of difficult to find exactly what you’re looking for without being more specific, since the Dead played the storied South Philly rock arena a walloping 53 times during the course of its career. The band’s Philly debut was at the Spectrum in December of 1968, opening for Steppenwolf and Iron Butterfly; their final Philadelphia show was at The Spectrum in March of 1995. (Hat-tip, WMGK, for the stat-keeping.)

Without digging into the nitty gritty tallying of every two- and three-night-stand throughout the 70s and 80s, I’m going to guesstimate that the band’s appearances at The Spectrum on August 29 and August 30th fell somewhere in the lower 30s of their Philly tenure, and today we bring you soundboard audio of those two performances. 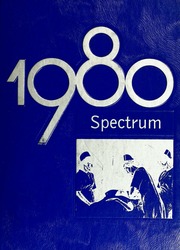 The two and a half hour opening night kicks off with “Alabama Getaway” and closes, 24 songs later, with “U.S. Blues.” The band really ramps up its energy over the course of the two sets, with highlights being the 20-minute expanse of “Drums” -> “Space” -> “Wharf Rat”…as one reviewer on Archive.org notes, this jam section was usually a visual experience moreso than an auditory one, but it’s an engaging run in this recording. Shortly following, Jerry Garcia’s guitar playing lights up all the way to the end of the second set closer, “Johnny B. Goode.”

The band returned the following night for another two-set engagement. We’ve only found audio of the first set, but it’s notable in that only one of the songs performed — “Althea,” from that year’s Go To Heaven — was repeated between the two nights. Looking at  the full setlist, the only other repetition was the “Drums” -> “Space” jam, which was a standard improvised part of every show, and played differently every night. Obviously this is how the Dead cultivated its passionate base of fans who would see them night after night, city after city, year after year. But seeing it broken down in numbers — 46 songs, only three repeated — that’s impressive.

Listen to the shows below. Were you there? Leave your memories in the comments.