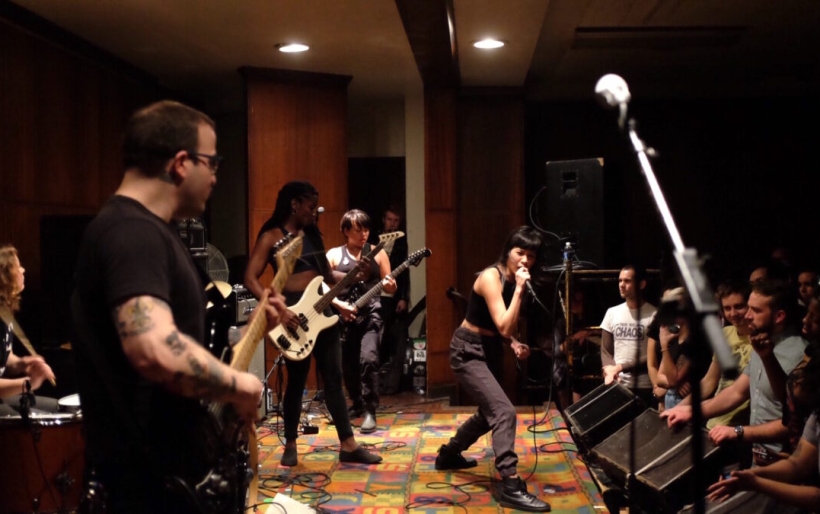 Philly five-piece S-21 has been making politically-charged punk rock since September of 2015, and coming up on their two year-anniversary, they’re sadly bringing their run to a close. Their show at the First Unitarian Church basement tomorrow night is their farewell, but they’re not exiting without one last addition to their discography.

The band caught my ear this winter when I came across their Year Zero EP, released on Slugsalt Records, in an installment of Items Tagged Philadelphia. As I wrote at the time:

S-21 is midtempo by hardcore punk’s standards, hard-hitting by most others’, and as vocalist Cella explains it, the band’s new single references 20th century genocide in Cambodia, offering a warning and taking a stand against fear-driven policies based on division.

We got to know more about the band when Key contributor Yoni Kroll spotlighted them leading up to this summer’s Break Free Fest, when the band described its mission thusly:

At the time, they alluded to taking time off to after their forthcoming 7″ to focus on bandmates’ various other projects: “Haldol (Tiff) and Blank Spell (Cassidy) will be touring across the US together in July/August and Blackout (Brian) and Fugitive Family (Brian & Cella) have a few shows lined up.”

But by the taste of the opening cut, the farewell Operation Menu 7″ will be one to seek out. “Thirst For Violence” is a slowburner built around roaring guitar feedback and chugging power chord riffs, as Cella rages in the face of warmongering — “appetite for death / bombs for breakfast / swallow villages / purge their remnants.”

Listen to “Thirst for Violence” below; tickets and more information on S-21’s farewell show on Friday, September 1st with Macho Boys, Exit Order and Blazing Eye can be found here.