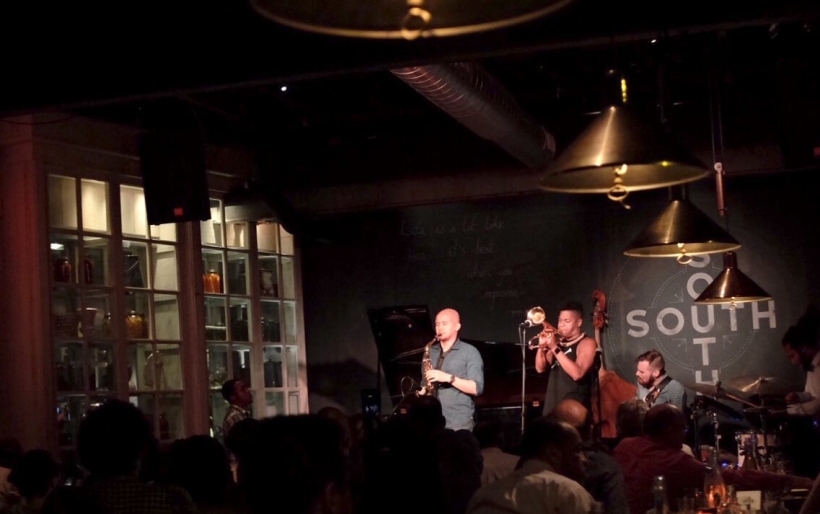 “We have all of this music that has grown out of jazz music over the course of the last 100 years,” says Christian Scott aTunde Adjuah. “What this generation is doing is trying to re-acculturate all of this music and collapse all of it back into a cohesive sound. We’re stretching jazz to fit all of the conventions of the things that have grown out of it”.

With his latest album Diaspora (the second installment of an ambitious trilogy of works he’s releasing this year), the New Orleans born trumpeter / composer seeks to illuminate the underlying harmony of the seemingly disparate musical cultures of the world. The music of Diaspora is a highly thoughtful melding of sophisticated jazz harmony and melody (“Our Lady of New Orleans”) with trap and NOLA Bounce Beats (“IDK” and the title track, respectively). The record is a masterwork which finds Scott and his ensemble reverse-engineering the past ten decades of American popular music, connecting it all back to the roots of the tree, jazz and the blues.

We spoke with him ahead of his September 10, 2017 performance at World Cafe Live.

The Key: For starters, why did you name this record Diaspora?

Christian Scott: Well, you know, the record exists in a series of records called the Centennial Trilogy. It’s three records and I looked to commemorate the first hundred years of jazz music history while looking forward to try and figure out the best way to approach creating sounds for the future and reevaluating the way we communicate to the listener is a big part of that. The first is called Ruler Rebel, which musically, identifies who you are listening to and it deals with more of my personal identity politics and things that I enjoy and love things that I look for personally in terms of illuminating where I am coming from as an artist. The second one is Diaspora, and that deals with who is being spoke to.

Obviously, this word is really weighted in terms of the African American experience because it’s part of the way that we identify people who have been brought to the Americas through the trans-atlantic slave trade. When I say Diaspora, I mean this of course but I’m also speaking in a macrocosm and a larger sense than that. We are all one family and you know, us having to take a moment and try and reevaluate the way we think about each other and begin to walk away from this idea that there is always an “other” and that there’s always a nemesis and some type of antagonizing force and to try to take a step back and walk into a reality that we would all prefer to gift to our children which is one where people can see each other for who we are and actually love each other and base their interactions on merit as opposed to something that was not a choice for them.

CS: And the last record, the final record that’s coming out in October is called the Emancipation Procrastination and ultimately this record is the message and it deals with a lot of sociopolitical and cultural issues that plague our environment as Americans. I consider myself a world citizen and, we’re on the road close to 8, 9 months out of the year and the vast majority of that time, we’re touring in other continents. So, we’re also dealing with what has to happen to liberate folks from their conditioning. It’s really a treatise to hyper-vigilance in terms of what has to happen with changing our reality and changing the way the we perceive each other and changing the type of situations like what happened in Virginia last week. All of these things are being addressed on this record. Ideas like racism being a learned behavior, these types of things are being discussed musically on these records. Ruler Rebel identifies the speaker, Diaspora identifies who is being spoken to and Emancipation Procrastination is the message.

TK: Walking it back a bit to Diaspora. You mentioned this idea of Diaspora on a macro level and folks not treating at the “other”. It seems like that sentiment is being expressed here musically. I’m hearing trap beats, that NOLA bounce “Trigger Man” beat and ya’ll are playing on top of that. Can you speak to how that search for unity is expressed in the music?

note: “Trigger Man,” aka “Drag Rap,” was a single released in 1986 by NYC Rap group The Showboys. The song caught on in the South and later became the foundation of New Orleans Bounce music genre, being sampled in thousands of NOLA Bounce songs.

CS: Well, you know, jazz and blues are the roots of the tree. You know, what we do in our music people call what we do called “stretching” or “stretch music” and this is a philosophy really, moreso that just a musical concept. It’s based in the notion that all perspectives, no matter where they come from have to be see as valid and need to be vetted out so figure out and we can come to a consensus of what our futures are going to be. So, my idea was if I can create a form or a template for a form that goes about the business of eradicating the notion or the idea of genre through fierce study of other cultures of music and taking the time to really understand and learn the tenets of all of these disparate cultures of music as a means of marrying them, then what am I saying about the people?

TK: You can study history and see how all of this stuff works in a really abstracted, “timely” kind of way, but why New Orleans? Why did all of this music Jazz, Funk, Bounce, end up coming out of there?

CS: You can make the argument for New Orleans being the only place on the continental United States where an African wouldn’t be killed if they had a drum.

CS: Obviously, I appreciate being New Orleanian and the culture there is incredible but a lot is made of New Orleans like it’s this space where the music was only eligible to come out of New Orleans. Now this is a New Orleanian speaking to you, and I’m not saying that pejoratively, I’m being real.

Now this music….these forms all of these things could have come out of a myriad of places, if you wouldn’t have been killed for playing a drum, if you wouldn’t have been slaughtered for reading a book. New Orleans is a very specific environment. In terms of The Western powers that held sway in New Orleans changed hands a lot. In some moments the Westerners operated a little looser in certain moments than in other places. Obviously, this is a place where African-descended people were able to secure their freedom. That’s going to lead to a very different dynamic than a city like Cleveland, Ohio, where Blacks would be killed for reading.

TK: That makes sense — the creative power and genius was already with us coming over on the boat.

CS: Yeah, if you look at what has grown out of America in terms of culture and sound, if we’re being blunt about it, it comes out of the (African) Diaspora. Any form of music that people actually like. There are some essential elements that came directly out of the experience of enslaved Africans. Different cultures are preoccupied with different things. When you listen to Western Classical, melody and harmony are obviously something that takes precedent over rhythmic counterpoint. When you listen to Cuban music or Puerto Rican music, salsa music, those are really the hybrids of both of those concepts because you can hear not only the weight of not just the Eurocentric harmony but also the weight of the African rhythm. Jazz is kind of a peculiar animal in that, a lot of people say that Jazz music is a mixture of European harmony and African rhythms but that presupposes this idea that there was no harmony in West Africa, which is fucking absurd.

The well-tempered system, which is a Western system, was turned on it’s ear by the first Black players because they heard in a different way. This is why that music sounds that way, if it was only European harmony, then how do you explain the blues? I’ll wait. The point is, any of these cultures that became popular music and had that type of fervor and that type emotionality, they came out of a really really hard experience. But that wasn’t an experience that was just synonymous with New Orleans. This is why still to this day, you have ancestral recall through rhythm.

That’s why when you go to Virginia Beach, or you go to any of these places along the Potomac. Baltimore, Maryland, D.C. and you hear that “Beat your Feet”, that go-go music. It has a very specific beat it has a very specific rhythmic culture. When go to NOLA you hear Bambu, Kassa Laban, you hear Kassa Soro, you hear all of these rhythms that come from Senegal, Mali, Gambia, Benin…Ghana, all of this music is derivative of these rhythms. When you listen to trap music, what you’re actually listening to is West African rhythms. Anywhere you have African descended people, you’re going to have a rhythmic culture.

CS: Nah man, I can’t wait to get down to Philly and cut up. I love Philadelphia and I hope ya’ll come out and join us.

Christian Scott plays World Cafe Live downstairs on Sunday, September 10; tickets and more information on the show can be found at the XPN Concert Calendar.