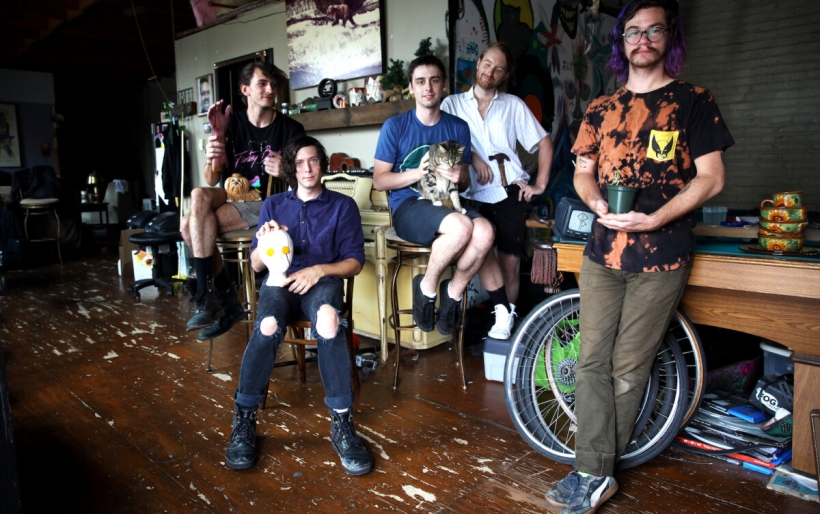 Time For Acchin: Weird N.J. rockers Pine Barons reflect on the road to their debut LP

Shamong Township sits about 35 miles south east of Philadelphia, smack dab in the center of New Jersey, but it’s practically a world away.

More of a geographical boundary than a bustling municipality, it’s sliced down the middle by Route 206 and dotted with diners, delis, liquor stores and a gun shop called Pistol Pete’s. At the south border is the mouth of the massive Wharton State Forest, the nucleus of Jersey’s storied Pine Barrens region –- an area with such acidic soil that nothing but evergreens can grow, home to cedar water and the Jersey Devil. It’s from this territory that Shamong-born indie rock five-piece Pine Barons lifted its name…and to a degree, its persona as well. Rugged and adventurous, mysterious and mystical, yet totally affable – these are Jersey guys, after all.

“It wasn’t so much that there was a scene [in Shamong],” recalls bassist Shane Hower of his band’s origins, pausing to look around the room. Several of his fellow Pine Barons are shaking their heads; there was, in fact, no scene in their childhood town, at least not as far as their brand of oddball hallucinogenic indie rock goes.

Guitarist Brad Pulley acknowledges that “another band or two” popped up in their high school, but they were more along the lines of Warped Tour-aspiring pop punk and hardcore; those kids hung out at the Cherry Hill Mall. He preferred the woods.

“I think it was moreso the isolation that brought us together,” says Hower. Today, this band of childhood friends rehearses on the ground floor of a two-story warehouse space in Fishtown, and three of the bandmates live on its second floor. I step across amplifiers and instrument cables to climb a staircase with a metal rail bound by a brick wall, and am greeted by a gregarious tabby cat at the summit. (“That’s Dr. Shivers,” says singer-guitarist Keith Abrams. “She’s got a PhD in cuteness.”)

It’s a cool evening in the spring; vegetarian chili is on the stove and the band is listening back to early mixes of The Acchin Book (pronounced “The Action Book”), the long-in-the-works LP Pine Barons released on August 6th via GrindSelect. It sounds great on the apartment’s hi-fi system – polished and pristine, a crystalline recording compared to the crunchy lo-fi fuzz of their 2013 EP. But it also retains that record’s love for textural oddities, like the percussive mechanical gears that crank and clang under the catchy groove rocker “Telescope,” which we’re collectively nodding our heads to.

The album was a long process, committed to tape over the course of a year at Fishtown’s Headroom Studios, where Pulley’s brother Kyle (also of Thin Lips) is one of the head engineers. Working with family had its advantages – Brad looked up to Kyle tremendously growing up, and absorbed much of his musical tastes from him. There was also an immediate sense of comfort and familiarity, where they communicate in ways that other artist-producer pair ups might never experience. The downside, though – Headroom had to fit the project in around their other day-to-day business.

“I mean Kyle, he’s my brother, he gave me a family price,” recalls Brad. “But because we had no money and he made very little money off us, we couldn’t block out, say, two full weeks to record. So it would kind of just be worked on when we had the money, when he had the time.”

That’s not to downplay the level of attention paid to the album-in-progress; when I visited Headroom back in 2015 to be a fly-on-the-wall for the process, Kyle was just as upfront and detail-oriented with his brother’s band as he is with higher profile clients, realistic yet encouraging about their ideas.

For instance, a fair amount of conversation centered around drummer Collin Smith’s use of a holy crash cymbal – which, you guessed it, is a cymbal littered with holes. Smith argued that the harshness of its sound would create a nice level of intensity; Kyle was less certain. “My feeling is I would prefer not to mix that,” he said, stern but jovial. “But if you’re passionate about it, let’s give it a try!”

Abrams joked that it would be ideal aesthetic for starting a beat-down hardcore band; “Just wait, we’re gonna have to change to tuning of all our guitars to drop-C.” Smith looked through the studio glass, and announced Pine Barons’ new style: “NoFX meets the Grateful Dead.”

I’m happy to report that this exchange did not result in any ridiculous drop-C songs on the record; the NoFX / Dead comparison, though, might not be too far off the mark. The wonky and wild skittishness of “Garden Spring” is intricate and dissonant, a head-spin rhythm that blooms into a swiftly soaring pop chorus; “Hourcoat” could be an extra from Animal Collective’s Merriweather Post Pavilion; “Alliterate Breed” glides along to interlocked guitar licks in a Built To Spill style, then launches into an over-the-top chorus that would soundtrack a skate video dang near perfectly.

Despite that litany of comparisons, Pine Barons isn’t a band that actively tries to sound like anybody. They’ve been playing music long enough that they’re past that point; Abrams, Pulley and Smith first jammed together in their mid teens, a pick-up band called Navajo Bixby with Hower’s brother Judd on bass. It only lasted for one show.

“But through playing together we became super close friends,” Pulley says. “It was like ‘Here we are, you have awesome songs, I play guitar, let’s start this band.’ It was like proto-Pine Barons and after that fizzled away, we decided to keep playing together.”

Living a far distance from Philly’s network of all-ages venues and house shows, and not really vibing much with the music their peers were excited about, family became a primary source of musical inspiration. “My dad is a musician too, he’s really good guitar player,” says Abrams. “And that’s kind of how I learned how to play — he shreds. I think I got my first guitar I was like five or something.”

Pulley adds that when he was in High School, he saw his brother down in Philly, playing gigs and going on tours with Dangerous Ponies; it inspired him to pursue music as well. “Having an older brother is great, or having an older sibling who is into music,” says Pulley. “You kind of inherit what’s cool before the kids your age get into it.”

And then, of course, there was their musical curiosity, and immediate accessibility of whatever artist they wanted to explore. “I think it was just the internet,” admits Hower. “Just us being like ‘oh, did you hear this band?’ to one another. When I started hanging with these guys, they were the first people where it was like ‘you like this kind of music too?’” Their geographic identity is also a point of curiosity – despite the Jersey-rooted name, they identified as a Philly band initially. “Our first shows, they were all in Philly,” says Smith. “We played as a three-piece at The Station in South Philly, I think that was the very first one.”

Eventually, they embraced their Garden State roots; but there was still nowhere to play in Shamong or Southampton. “I moved here in high school,” continues Smith, “and old bands of mine — even my brother’s band at the time — we’d play with Dangerous Ponies or Chrissy [Tashjian]’s old band The Bee Team and, like, Algernon Cadwalader too.”

To complete the circle of connectivity, Joe Reinhart of Algernon is Kyle Pulley’s partner at Headroom.

“I got affiliated with all those guys throughout that time, and older bands like Juston Stens and the Get Real Gang,” continues Smith. “So older projects of my own, we would play a lot in Philly, so that was easier to transition to get shows with Pine Barons. When you build relationships, it does make it easier; that’s how we got hooked up with a lot of our first gigs.”

The first EP isn’t one Pine Barons clings to, necessarily. Says Abrams: “I don’t think we even really had a ‘sound’ when we put that out. Or we didn’t develop it.” Once they started playing the music live, though, it became more cohesive, blasting off into the Pine Barons we know today, and bolstered more recently by Alex Beebe on keys. He’s another longtime friend who tour managed the band when they went on a U.S. run with The Districts, and debuted as a fifth member in May of 2016. His first show with them was in a New Brunswick basement, attended by maybe 30 people; his second show was at Ram’s Head in Baltimore, opening for The Front Bottoms in front of a sold-out crowd.

“My first one, it felt like I had to prove my worth,” says Beebe. “I thought I did alright. And then the second one, I was preparing so much for the first little show that I didn’t even think about the fact that I’d be playing for 1,500 people. I just tried to play cool; I think I played cool.”

Having him in the mix allows the band to add details that had been missing. “Keith finally made the point – and it was almost stupid that we didn’t think of it sooner – but he was playing all of these different instruments,” Pulley said. “Keys, sampler, auxiliary drums on top of guitar and vocals…”

“It took so long to set up,” sighs Abrams. “I was like yes, come along please.” So, with The Acchin Book out now, a slot on the Philly Music Fest lineup this weekend, a live configuration that captures the nuance of the sonic tapestry they built up over so much time in the studio, how does Pine Barons feel its process has grown?

“I would say we’ve become smarter, or maybe less flashy,” says Hower. “Things that are fun to play aren’t always the best thing to play. Especially for bass; sometimes you just need that backbone of just the root notes. Yeah, it’s awesome to rip this one part or whatever, but the feeling’s so much better when it’s just following along”
“It’s just learning to be tasteful or right for the song,” adds Pulley. “That was the biggest development for me, personally. You can have fun playing guitar by yourself — you can play whatever you want! — but when it’s time to put a song together, it should always be in service to the song. It’s not like beforehand I felt differently about that, but I guess we’re just getting better at that, having a better ear for it.”