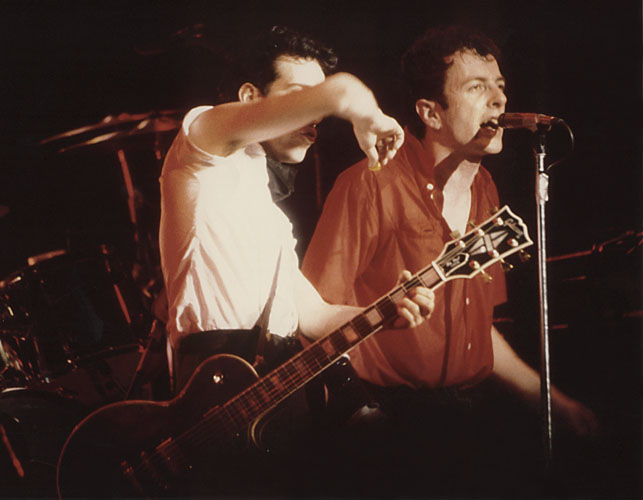 The Clash in Philadelphia | Photo by Todd Heft

English punk rock icons The Clash rolled through Philadelphia on this day in 1979 for a show at Walnut Street Theatre. They were only a few months away from releasing the critically acclaimed London Calling, the record that boasts the legendary photo on the album cover of Paul Simonon smashing his bass guitar. This photo has been called one of the greatest in rock and roll history and is almost universally recognized.

The Clash (at least in my opinion) are one of the greatest punk-rock bands to ever exist. Unfortunately, their run was cut short to a single decade. But they left a permanent and lasting impression on both the worlds of punk and rock and roll. The setlist for the show at Walnut Street Theatre adhered primarily to the tracklist of their sophomore record Give ‘Em Enough Rope, but included a few tracks off the forthcoming London Calling like “The Guns of Brixton” and “Koka Kola.”

The Clash are famous for pioneering the incorporation of radical politics into punk music, lead singer Joe Strummer was a committed socialist and didn’t care who knew it. They differed from other punk bands from the time in the sense that their rebellion was directed at unfair politics and/or any other inequalities they felt needed to be publicly addressed. Their anger was justified, it did not stem from empty discontentment nor did it ever evolve into that. They were a band with a message, one that they made sure was heard loud and clear worldwide.

For those of you fortunate folks who attended this show – we would be very appreciative if you would allow us to live vicariously through your experience, so if you’ve got anything to say post it in the comments section. For curiosity or nostalgia’s sake, check out the audio from the show below.