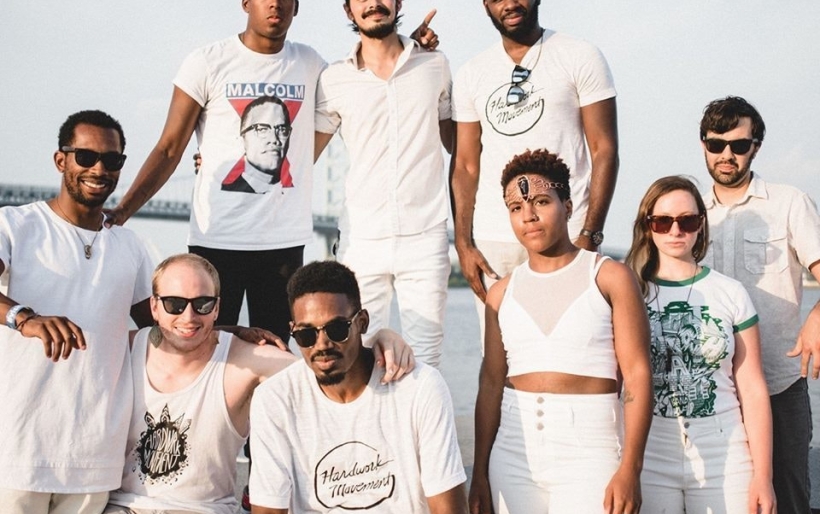 Hardwork Movement | photo by Danny Gevirtz | courtesy of the artist | via instagram.com/dannygevirtz

Dig in to Hardwork Movement’s first full-band EP, For the People

By Jack Madden
September 25, 2017
08:09 AM
Share
Hardwork Movement | photo by Danny Gevirtz | courtesy of the artist | via instagram.com/dannygevirtz

Hardwork Movement are for the people. If you need any convincing, throw on their new EP, appropriately titled For the People. After a performance-filled Summer to remember for the Philly nine-piece, the group is kicking off the Fall by giving back to their fans in the form of their first EP with the full live band. The 9-member neo-soul infused hip-hop group held things down at Delaware’s Firefly Music Festival this past June, blessed the stage at our own XPN Fest the following month, and capped the summer off with a headlining set at Underground Arts this past weekend to celebrate the release of the EP.

This project is the culmination of the Movement’s live performances around Philly over the past two years. For the People’s second track, “Wandering,” features a laid-back instrumental holding the song together. Soft, almost lounge-like, keys flow throughout the song. When combined with the crisp drum breaks and clean brass parts, the instrumental provides a solid foundation for the raps laid down by the group’s multiple MCs — Sterling Duns R.B. Ricks and Rick Banks, with Jeremy Keys on the hooks.

Other times, the vocalists prove they don’t need the backing band, as apparent on the the smooth and powerful a cappella track “Don’t Block the Sun,” sung by trumpet player Becca Graham and flautist Dani Gershkoff. The near 7-minute long closing track, “Becca’s Jam,” highlights the best in all of the group’s members. The finale ties the entire 8-track project together, featuring a catchy hook, a solid instrumental featuring brass solos at times, and clean bars from the group’s MCs.

Stream the full project below, and keep tabs on the band via Facebook for word of their next appearance.