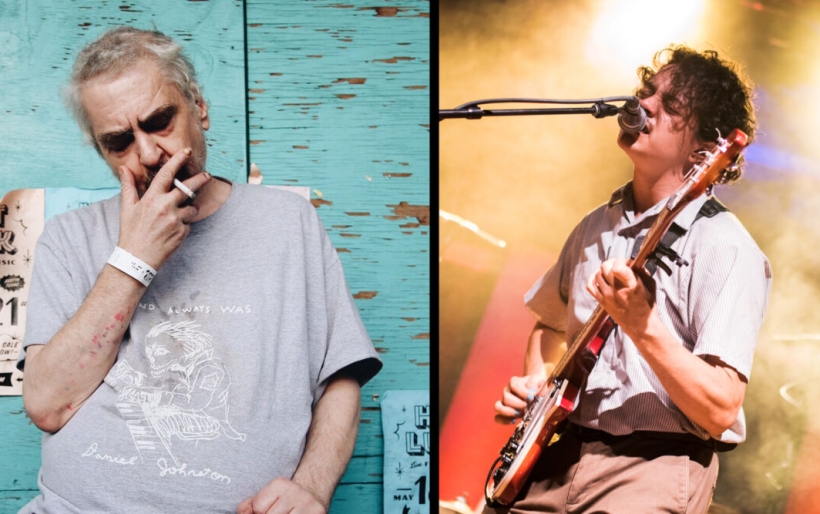 When The Districts’ Rob Grote and Braden Lawrence attended a Daniel Johnston concert as teenagers, Grote remembers dreaming of a day when they could be a part of Johnston’s backing band himself. Little did he know that, in a few years, he’d not only get the opportunity to be a part of a rare Daniel Johnston tour, he and his band would pretty much direct the entire evening, albeit with a little help from some local friends.

“We all really like his music a lot, and it was definitely an influence on us,” Grote says. “Braden and I saw him at Union Transfer when we were still in high school, and the opening band backed him. Ever since then, backing him has been a dream of ours, although unrealistically we thought. We’re super honored to get to do it!”

Now, all these years later, Grote and his Districts cohorts have since moved from Lititz to Philly for school, left said school, and have become keystones of the city’s music scene with a devoted following in the U.S. and abroad. And, just like he dreamed about those years ago at Union Transfer, he and The Districts will be joining Daniel Johnston as the support for Philly date of the enigmatic singer-songwriter’s final tour.

It’s not just that they’re a part of the show, they’re pretty much dictating the show. For this string of dates, which the Johnston camp announced would be his last, the supporting acts have an unprecedented amount of autonomy in terms of how the show goes overall. Not only are they serving as his backup band, they get to call a lot of the shots, and they have to do it with extremely limited contact with Johnston, who is known for being just about as far out of the limelight as humanly possible while still being an immensely influential musician.

So, when Johnston’s management team approached the Districts about being a part of the show, they jumped at the challenge. That’s a key word here: Challenge.

There’s another Philly band that shares a similar history: Modern Baseball. Hometown friends relocate to Philly for school, become immensely popular, leave school to pursue music full-time. And, wouldn’t you know it, they’re the other half of the Philly support for the Johnston show.

Both bands have plenty on their plates right now. MoBo is gearing up for their three-night, sold out string of shows at Union Transfer in a few weeks — their “last shows for the forseeable future,” as they’ve said in the lead-up — while juggling various other projects both locally and internationally, and The Districts are touring in Europe. Because of that, it’s been impossible for the two groups to really coordinate and form a game plan.

That distance makes coordinating a show of this magnitude a little difficult to say the least, but Grote seems to think that they’ll be OK.

“We haven’t worked with the Modern Baseball guys directly, we’ve just been listening to the songs we plan on playing a bunch,” Grote says. “It’s always fun to play other people’s music, [it’s] definitely a different process and obviously you want to make sure you do it justice. It’s particularly difficult since we’re backing him rather than covering a song, so we want to make sure the arrangements work well for him, too.”

That last part would prove immensely difficult, as Johnston is pretty much entirely off the grid. He has no access to a computer or the internet. Any emails sent to him are printed out and delivered to him (usually within a week, according to his website.) The best way to get in touch with him directly is by sending him physical mail to a P.O. box near his home in Texas.

So, between the madness of both bands’ current schedules and Johnston’s reclusive nature, there isn’t a lot of prep they can do.

But, that’s kind of the fun it, isn’t it? Everyone is in it together.

Because of this, even Johnston seemingly won’t have any idea what they’re playing beforehand. The bands pick the set list.

Elsewhere on the tour, Johnston will be joined by some real heavy hitters in the music world. He’s got Mike Watt and members of Silversun Pickups in Los Angeles, Jeff Tweedy in Chicago, and Built to Spill in the Pacific Northwest, among others.

Those names speak for themselves, and the fact that being invited on this tour is a huge deal is not lost on Grote and co.

“A huge honor indeed!” he says. “Still very surreal, and certainly not something that we’ll ever forget.”

With just a few days until the show at the Tower Theater, Grote seems pretty relaxed about the whole thing (or lets on that he is, at least). He’s just trying to enjoy the fact that they’re involved in not only Johnston’s final tour, but have been invited to be in such celebrated company.

“Mostly just excited for the challenge and experience of playing with Daniel and trying to do as great of a job as we can,” Grote says. “Only nervous about not wanting to arrange the songs in any way that would confuse Daniel for singing, while also making them work in a unique way for the show.”

With someone like Johnston, whose career has been full of unpredictability and eccentricity, you never really know what’s going to happen. Adding to the mix two bands who haven’t rehearsed together or with Johnston, and haven’t quite decided what songs they’re going to play together, and things could get interesting quickly.

And, knowing Daniel Johnston’s career, that seems like the most appropriate send-off you could give.

Daniel Johnston performs backed by The Districts and Modern Baseball at The Tower Theater on Wednesday, October 4th. Tickets and more information on the show can be found at the XPN Concert Calendar.