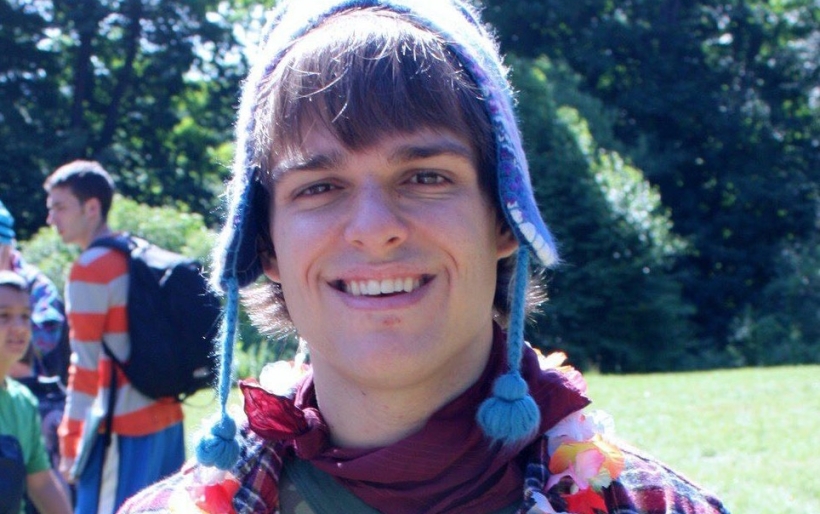 The Philly DIY scene was stunned last week when Brian Nowell, frontperson of the experimental rock four-piece Blue Smiley, passed away at age 26. Tonight, the community will come together to remember Nowell in a memorial service at Girard Avenue DIY space Everybody Hits.

With local label Third Floor Tapes, Nowell and Blue Smiley released a self-titled collection as well as the ok mini-album in 2015; last year, the band followed up with a new single called “Return.” The music ranged from lo-fi home-recorded fuzzrock to expansive, expressive dreampop.

And their sound was still growing; as Philly show promoter Barrett Lindgren remembered on Facebook, the last song he heard Nowell play was the title track to Brian Eno’s 1974 album Here Come The Warm Jets, closing out an August show at Everybody Hits. “It’s rare to see someone approach a classic like this with such careful intention and fresh perspective, but I thought their version was perfect,” Lindgren wrote. “It was like hearing it for the first time. Something about that set and this song in particular made me feel like I was watching Brian fully hit his stride as an artist, and I was really excited to watch him grow.”

In addition to being a proficient singer-guitarist and ambitious songwriter in the live music scene, Nowell was a jazz education major for several years at Temple and a trumpet player in the marching band, which is where Seann Cantatore of Flounder Warehouse met him.

“My first memory of Brian is him crawling through all of the overhead cubbies on the marching band bus on the way to a game – a very accurate portrayal of his fearlessness and goofiness,” remembers Cantatore. “My most recent memory of Brian is him comforting and hugging me right after he finished playing a show, as I cried about something that had happened earlier that day – a very accurate portrayal of his kindness, compassion, and selflessness. Thank you for your friendship. I’ll continue to admire you.”

Cantatore also shared thoughts and memories from some of Brian’s friends and classmates at Temple’s Esther Boyer College of Music.

from Gracie Clements: “Thank you for never judging anyone and for always willing to go into detail about how you made that vegan cheese. Thanks for never making me feel weird about my odd sense of humor. Thank you for being such a supportive friend and creative inspiration.”

from John Slavin: “You were the the real deal. I’m glad we got to make great music and eat vegan treats while you were here. The funniest and best times in college will always be associated with you. I’m glad we got to live together and share those memories. I’ll miss that laugh and that powerfully creative mind.”

Tonight’s potluck memorial organized by Nowell’s bandmates begins at 8 p.m. and runs until 10 p.m. at Everybody Hits; the suggested donation is $5 to $10, with proceeds going to Nowell’s family and a charity TBD. More information can be found at Facebook. Below, listen to a Spotify playlist of Nowell’s favorites that the band shared; it will be the soundtrack for tonight’s gathering.