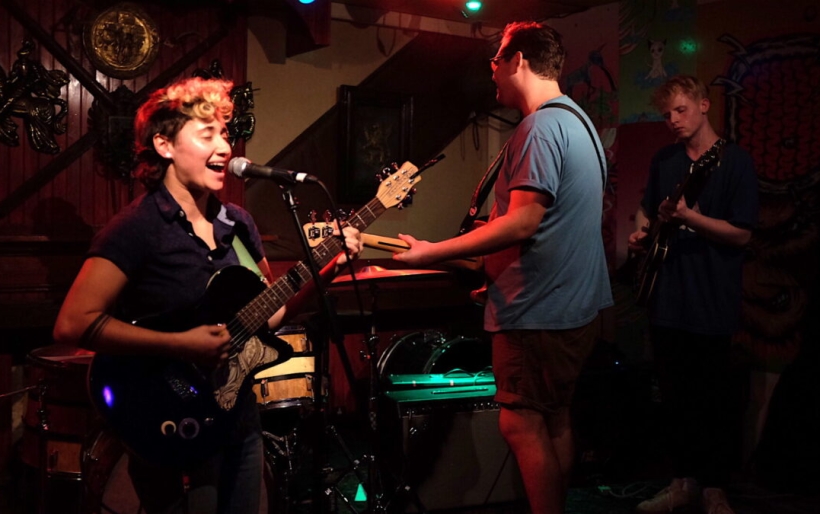 We first met Philly native Allegra Eidinger when they were living in Pittsburgh, playing bass in Yes Yes A Thousand Times Yes and just starting their solo project, AllegrA with an antifolk-tinged offering called My Legs Are Growing. Flash forward twelve months and Eidinger has moved back to Philly, started playing lead guitar in Kississippi and prepped an LP’s worth of new material, a self-titled outing that will see its release on November 10th via Sad Cactus Records.

To announce the record this week, AllegrA released a cosmically colorful video for “I’m An Introvert,” a song that honestly addresses the social anxiety all of us encounter on the regular.

With a bright indiepop undercurrent and Eidinger’s mellifluous vocal — which recalls a more upbeat Nico at moments — the song finds our narrator uncomfortable and frustrated in a room full of strangers: “This party sucks, I hate small talk / please don’t ask me my major.”

The song proceeds into a litany of questions, ideas they’d rather talk about, conversation-starters that could go below the surface, but might prove just as maddening: “What do you think happens when we die? Existential talk replaces looking me in the eye / What was the last movie that made you think that your life is just like the movies?”

The idea is bought to life visually by Anna Azizzy, who mixes bright-colored costumes and sets with retro digital visualizations to give it the look of a playful kids’ show, or perhaps the more idealized version of the party described in the song.

Watch the video below, and catch AllegrA at any of their upcoming performances — they’ll be at JJ’s Diner in West Philly on November 4th to open up Weller’s album release party and then head to Planet Phitness on November 17th for their own record release, where they’ll be joined by Tombo Crush and Snake Boy Gang. More information on the show can be found at its Facebook event page.