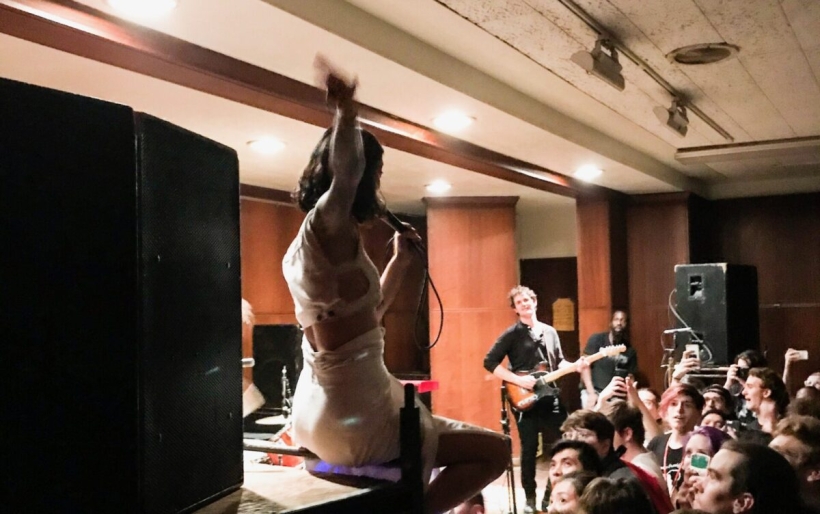 It was a triumphant night for Japanese Breakfast at the First Unitarian Church. Not only was it the band’s homecoming show after an extensive US tour and the long-awaited hometown celebration of the release of Soft Sounds From Another Planet, but JBrekkie sold the dang place out. Bandleader Michelle Zauner expressed disbelief at the size and enthusiasm of the crowd, reminiscing on her days as an R5 Productions intern when she was the one mopping the church basement floor after shows. No mopping was in store for Zauner last night, though — after opening sets by fellow locals The Spirit of the Beehive and Mannequin Pussy, Japanese Breakfast took over the church’s iconic stage for a energy-filled hour-long set of favorites off of 2016’s Psychopomp and 2017’s Soft Sounds.

Zauner’s relentless energy throughout the set was so infectious that even her bandmates — including guitarist and husband Peter Bradley — seemed awestruck. After opening with dreamy Soft Sounds lead track “Diving Woman,” Japanese Breakfast launched into a rousing rendition of Psychopomp‘s “In Heaven,” making full use of the stage to lean over and sing right into the audience members’ faces, to their delight.

Many of Japanese Breakfast’s songs are, lyrically, somber and heartfelt tributes to Zauner’s mother, who passed away three years ago. There wasn’t a hint of melancholy in the air during the band’s set, though — Japanese Breakfast are masters of taking even the saddest of songs and turning them into an impassioned and exultant live performance.

After a series of songs that had the crowed dancing along, Japanese Breakfast took some time for a few slower tracks, including brooding Psychopomp standout “Triple 7.” Zauner introduced the heartfelt “Till Death,” which she dedicated to her in-laws who were in the audience, by promising that “after this, we’ll dance.” And that promise came true; the band closed out the set with exuberant renditions of “Everybody Wants to Love You” and “Machinist,” which led Zauner to dive into the audience to dance with her fans before literally climbing to the highest point in the church basement to look out over the crowd.

Japanese Breakfast were last seen in Philly when they played Made in America in early September before heading out on tour, and though that set didn’t bring the crowd of dedicated JBrekkie fans that last night’s show did, it left Zauner with a story to relay. Along with a couple tracksuits and some other MIA swag, the band was given a bottle of Jay-Z’s champagne — and according to Zauner, they’d been saving it for last night’s celebration. The band had no time to rest, though — by the time the church crowd woke up this morning, they’d already embarked on their European tour. Japanese Breakfast’s next tour stateside will take them to the West Coast for some co-headlining shows with Jay Som.