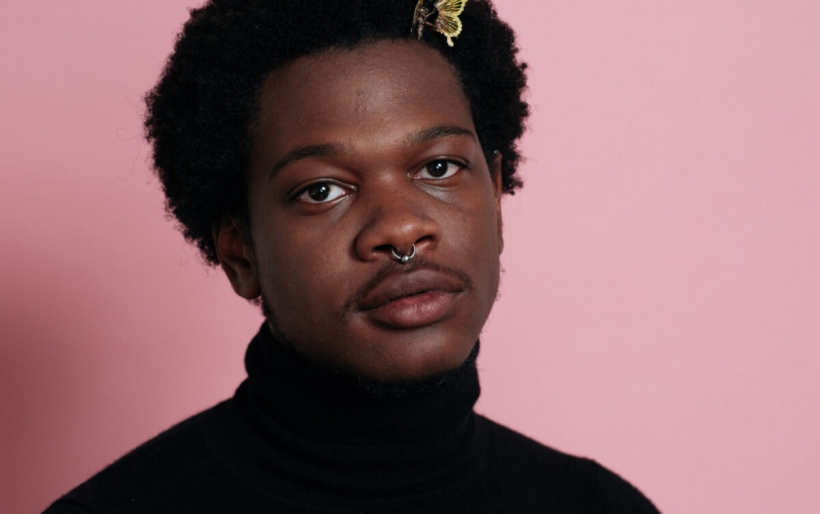 Shamir | photo by Jason MacDonald | courtesy of the artist

There are a hundred reasons to write about Shamir Bailey – known professionally as simply Shamir – beyond a recent relocation to Philadelphia. With a piercing contralto/tenor falsetto, Shamir demonstrates a musical curiosity ranging from 90s house, soul, country (all on 2015’s Rachet album), and now, lo-fi rock and fizzy pop (2017’s Hope and its follow-up, Revelations).

The-Vegas-to-NYC-to-Philly transplant has a singular voice, making any song identifiably theirs – be it silly (“90’s Kid”) or heartbreaking (“Like a Bird”) or angrily disgusted (“I Fucking Hate You”) in its lyricism. With Revelations out this Friday, November 3rd on Father / Daughter Records, and a First Unitarian Church gig on the horizon, I got Shamir on the phone to talk about their process, influences and aspirations.

TK: You moved to Philly a minute ago, but you still have your Vegas phone number. What’s up with that?
SB: Uhhhhhm, because I’m still on the family plan. [laughs]. I’m on it with my mom and my sister, but I pay for me and my sisters, and it’s still under my mom’s name.

TK:  You come from Vegas. You also come from the Nation of Islam. I’m curious if or how those backgrounds show up in your music?
SB: I definitely don’t practice anymore. That was very much a part of my life, but if I’m being honest with myself, it isn’t so much that at present. At age 12-13, I sat my family down and was honest and open with them about that.

TK: I have seen you refer to a country influence in your music. I know you spent time in the Southwest. How has that affected what you do?
SB: I think mostly in my lyrics, their simplicity. Plus, if you listen to my song, “Cloudy,” that is a straight up country song.

TK: I know that you are a big Nina Simone fan too.
SB: She is like my mother, my mother in music. I have been listening to her since the womb. My mom always played her records when she was pregnant with me.

TK: I bring this up because I thought you might like to know that Nina lived in Philadelphia – the first time, was in her youth when she was attempting to get into Curtis Institute of Music in her youth but was turned away. She also lived on Walnut Street for a time later on.
SB: Whoa. That’s amazing. I didn’t know.

TK: I just thought that you might enjoy that with your psychic proximity to Simone. Do you write songs in solitude? At home or in the studio?
SB: Yeah, I think if anything, I like working at home by myself. The only song on “Revelations” that is co-written with my best friend – literally since middle school is “90’s Kids.”

TK: “90’s Kids” is hilarious. Do you have a good vocal fry like you sing about in the song?
SB: Well, you’re talking to me. [laughs]

TK: So, why did you move to Philly? What was the lure?

SB: I fell in love with it when I was in New York City, recoding my first record. I snuck off to Philly to go to a show, and was completely taken aback by the city before I even got into the venue. I just loved the music scene, the DIY scene, how accessible music is out here. That spoke to me.

TK: To paraphrase your one-time producer and manager Nick Sylvester, your music is pure. Do you see that? Do “Hope” and “Revelations” radiate that same purity?

SK: Yes, I think so. I try to be as honest as I possibly can. Even Rachet’s lyrics are pure, open and real, even if the music was bigger. Now, with “Hope” and “Revelations,” I’m just upping the pureness, giving 100% me.

TK: Is that why the new album is considerably less layered than Rachet?
SB: Yes, totally. The technical aspects of recording – to me – are something I haven’t yet mastered. But that never seemed like a big deal to me. I never judged music by its size or its production quality. I go by the actual songs.  I just hope that my songs are strong enough to hold up on their own without pristine production quality. Plus, I love lo-fi music because of that pureness – like Beat Happening, all that stuff.

TK: Were you happy with Rachet’s sound quality? Did that level of production fit that set of songs, and Hope and Revelations’ production fit its songs?
SB: Rachet is more of a collab album with Nick, one that does not showcase my songwriting values to the fullest. Like these new albums, the songs were started off on guitar, but with Rachet they got handed off and made into big pop songs.

TK: Is there something that you’re running from or running toward?
SB: Not running. Coping. And I hope that my coping helps other people.

Shamir headlines the First Unitarian Church on Saturday, December 16th; tickets and more information can be found at the XPN Concert Calendar.