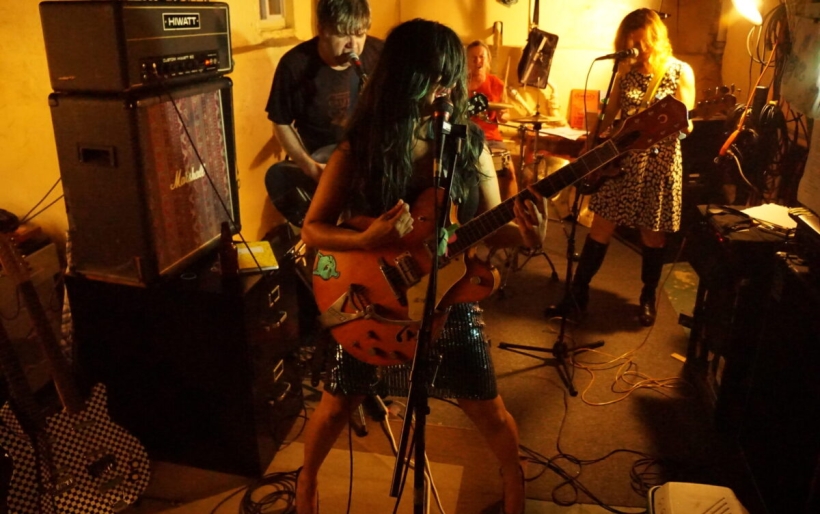 RunHideFight | photo by Adam Wallacavage | courtesy of the artist

Toward the end of the mad, bad, 90s in Philadelphia, blunt, forceful guitarist-singer Geeta Simons was part of several essential bands, with the revved-up garage rocking Rockula and the poppy, post-punk Swisher being two of her most notable and notorious. Like other musical artists before her, Simons was effected by two things, for better and worse: physical problems involving the dexterity of her hands, and marriage, then children. So she became, in her words, “freaking Donna Reed, if she was tanned and cool,” for over a decade of (still wedded) bliss, and raising two girls.

Like other artists before her, Simons grew as restless now, as she was a young player – the very manifestation of the 7-year-itch. So, she kicked the kids out of the playroom, so to speak, began demo-ing new garage-ish songs she had composed, then formed RunHideFight with another punk rock mom, Christine Weiser of Mae Pang, as well as Stinking Lizavetta’s Cheshire Agusta and Suffacox, and Jonathan “Brother JT” Terelsky.

The Key: Did you consciously decide to put down your axe as you were preparing to have children, or was it just a natural part of the process?

Geeta Simons: It was absolutely unnatural for me to put my guitars away, but it was survival, and predated the kids and my marriage. I had developed serious problems with my hands, and it was a choice between playing or typing while finishing my education. Salvation seemed to be on the side of putting music behind me. But the cost was that of my identity. I thought I could make a new one, but the ”me” that I knew and loved, wilted away without music. I met my husband two decades ago playing music, it wasn’t getting married that changed it – it’s more that having two little girls, I thought that I’d be romanticizing, exposing them to a dangerous world that I wanted to protect them from. I wanted them to be happy. I didn’t go into punk rock as a teen because I was a happy “the world’s my oyster” kid.

I grew up with a ton of racism in West Virginia, a multi-cultural embarrassment. As a first gen, Indian American woman; I was busting up all kinds of cultural/gender norms by not finishing a pre-med track, having a green Mohawk and tattoos, playing in punk bands at skate parks, openly dating before marriage. I was so angry and I desperately wanted to be heard and seen by a world which resisted that. I wanted a happy, quiet sitcom life for my kids, and thought it would be selfish and destructive to bring my music experience into their lives. But music is my first language, and eventually, after my own mother died, it came to a head. I was like a mermaid out of water for too long. I’m not sure I would have survived. And plus, who likes dehydrated fish, yuck.

TK: Putting down / putting away music: were you always OK with that?

GS: Since I’d already paused it, it wasn’t quite the same. But when I had the girls, I was fortunate to have many years of being able to focus just on them. And luckily, I loved 99.9% of that. I’d say for me, it was more the social isolation that was driving me bonkers; just cause I’m a woman it doesn’t mean I knew how to do all this kid stuff the minute I gave birth. I followed the suggestion of joining this Center City mom group that made things even worse: crazy sorority girls dressing their babies in colorless shades and comparing Kate Spade diaper bags. And, being told by the world “this is you now, Geeta, because you have passed a living being from your vagina.”

Gaining 50 pounds per pregnancy was a wake-up too; people stopped seeing me, and treated me as if I was less competent because I was spherical. Then topped off by being brown and having my children look so white, people thought I was their nanny. Yeah, it wasn’t my life with the kids, but rather how unfulfilling rest of the world outside of my life with my family was, how little recognition came to a stay at home mom, where my accomplishments were washed out like scribbles in the sand on the beach at the end of each day.

TK: Do you have a phrase as to what you feel or recall about the scene you first played in with Rockula? RunHideFight | photo by Adam Wallacavage | courtesy of the artist

TK: During this break from music, are you in touch with old scene friends such as Cheshire Agusta?

GS: No, I was kind of isolated in baby land. Which was part of the problem. Also, friends in music who didn’t have kids didn’t understand, thought I’d let myself go, or just took it personally that I didn’t want to hang out. Also, I felt too anxious or guilty – or guilt-ed by others – to take time for my own well-being and interests, because I had two little kids. It was only when the kids were older that I began to return to feed my own humanity. As Joann Rogan from Thorazine puts it, it’s the “7 year-old itch” because when your youngest kid is seven, many people – men and women – feel the kids are independent enough that the parent can go back to rock.

TK: When and what was the hard specific moment when making new music became a thing? And how do you think your mother’s passing prompted such?

GS: Yeah, my mother’s death and Trump in the White House. I thought, holy shit, Geeta, only punk rock can save us now. My mother had been ill for a long time, and she died. I had been in this weird “care for you ill parents while caring for your own little kids” place; a caretaker supreme. And when she had gone, there was a gut-punch of grief even though I knew it was coming, and another identity loss as I didn’t realize how much of myself I’d given away taking care of others. I had built this scaffolding for others but my own had rotted away; I felt like I couldn’t even talk- and that primal language of music was the only way to get any semblance of a functional me back, and a way that I could express my grief and protest in an increasingly unbearable situation.

And speaking of unbearable situations, the band name comes from this too; it is a PSA. In our day, it was “Stop Drop and Roll” in case of accidental fire. Now it’s Run Hide Fight (which used to be something more passive like Run Hide Tell) because these horrific shooter situations have become so common. A few mornings ago, I got a RunHideFight Google alert, a headline from the Sydney Herald that said “Run Hide Fight: America’s new normal”, but the next line was “after Texas mass shooting.” Just to be absolutely clear, it’s a weird an awful norm, and the name of the band is a way of pointing out that “this is NOT ok,” we can’t just normalize situations like these.

TK: So, you kicked your children out of the playroom and I started composing and writing there?

GS: I didn’t deprive my children of their only play space. They live in a colorful utopian West Philly fairy land, with an art space, experiment and building blocks area, special nooks and secret gardens- because the function of our home space is to bring the family joy. Not to impress the Joneses of Narberth. But as they got older I realized, I can have one of these rooms for my music, they can settle for an entire floor of the house, they don’t need two. So, Mr. Potato Head and 10 million stuffed animals were “relocated”, and the HiWatt and Marshall 4x10s came out of their road cases. Although, I did have a ton of kids’ musical instruments from doing music classes here; and I kept those in the studio.

On “Get Lost”; it’s their purple plastic egg shakers and caterpillar-shaped tambourine. The song was recorded in my daughter’s playroom in my daughters’ playroom. My good friend that I went to Junior High with, Jay Demko (who was in the hardcore band Lincoln, now in Otherworld Traditions), came down from Portland to help me record these. At first pass, it’s me playing all guitars and drums as well as singing, with Jay on bass mostly, but me playing that sometimes as well. But another friend of mine and friend of Jay’s from the way back days, Jason Koukournis (who is out on tour with Hot Snakes right now) came over and played over my drum tracks for these ones that are on SoundCloud. And bless his heart, cause it ain’t easy to put drums on last. I’m pretty sure I can credit his wife Therese for nudging him to help a fellow mom out. Then JT came over and laid down some blistering wah guitar leads on “Eat My Heart Out”, and Christian Osgood (Harangue, Bottomfeeder, Monkey 101) put down bass for that one as well. I still have a semi-permanent bone bruise on my knee cap though, from kneeling down on a leftover minuscule Lego piece while connecting my pedals. But that’s how us Moms roll.

TK: So, are you in this for the long haul, or do you think this one gig will soothe the 7 year itch?

GS: Absolute long haul. The simultaneous exorcism / seance is complete: and I’m not going anywhere. Yes, I’m totally involved with school stuff; if I want my kids to be in an vibrant and multicultural community, I had to get off my ass or shut the hell up – which is not something I’m ever likely to do. But I’m still me: when my hair started going white at the temples, I dyed it green; and I’ll tell you – no one else in the PTA has my hairdo. But, musically, I’m back in the garage. One could say I have never left.

RunHideFight plays Johnny Brenda’s on Tuesday, November 14th. Tickets and more information can be found at the XPN Concert Calendar.