Inside Urban Styles, a new book exploring the intersections of graffiti and hardcore - WXPN

Inside Urban Styles, a new book exploring the intersections of graffiti and hardcore
WXPN Local

Inside Urban Styles, a new book exploring the intersections of graffiti and hardcore

Arguments about legality and aesthetics aside, the term DIY is never more applicable than when you’re talking about graffiti. How much more Do It Yourself is there than putting your art, whatever it might be, directly on a wall for everyone to see? There’s good reason graffiti has been around for all of recorded history: it’s completely accessible but also quite subversive and potentially dangerous. It’s also just so totally badass to write graffiti. You might be doing something illegal but you’re doing something illegal in the name of art. How cool is that?!

There’s a lot of parallels to be made between graffiti and punk. Both rose to a certain amount of cultural prominence in the 70s and 80s. Both owe a lot to people of color who trailblazed the path in places like New York City and Southern California. Both have occupied that funny place in society where they’re both accepted as a sort of protest but also serve as an example of everything that is morally wrong, oftentimes in the same sentence.

So while graffiti is most-often associated with hip-hop, it’s no wonder that there was crossover between the two, a shared movement starting in the early 80s and really coming to a head in the New York hardcore scene of the late 80s and early 90s. Freddy Alva’s new book, Urban Styles: Graffiti in New York Hardcore, is an incredibly in-depth history of that period, documenting the bands, the graffiti crews, and the style and fashion of this cultural phenomenon.

While the book is obviously focused on New York City, there are multiple Philly connections, the biggest being the band Pagan Babies. Around only three years from 1986 to 89, they’ve long been considered one of the first hardcore acts to be very, very up front about their graffiti and hip-hop influences. This can clearly be seen just by looking at the cover art of their 1988 album Next, which features the band logo and album name done in the classic handstyle of Bruce “Juice” Boyd, a graffiti writer and the band’s drummer.

Another important Philly connection is the book’s publisher, DiWulf, which is based in the city. Run by Steve DiLodovico and Amy Yates Wuelfing, DiWulf was responsible for the 2014 oral history of the legendary Trenton club City Gardens, called No Slam Dancing, No Stage Diving, No Spikes.

This weekend there will be two release events for Urban Styles, a book signing tonight at Amalgam Comics co-presented by Philly punk and movie podcast Cinepunx and a party on Saturday at Cresson St. Tattoo with Paul Bearer from the band Sheer Terror DJing.

We spoke to Alva and DiLodovico – who also served as editor on this book – about Urban Styles and what they see as the impact of both graffiti and hardcore. 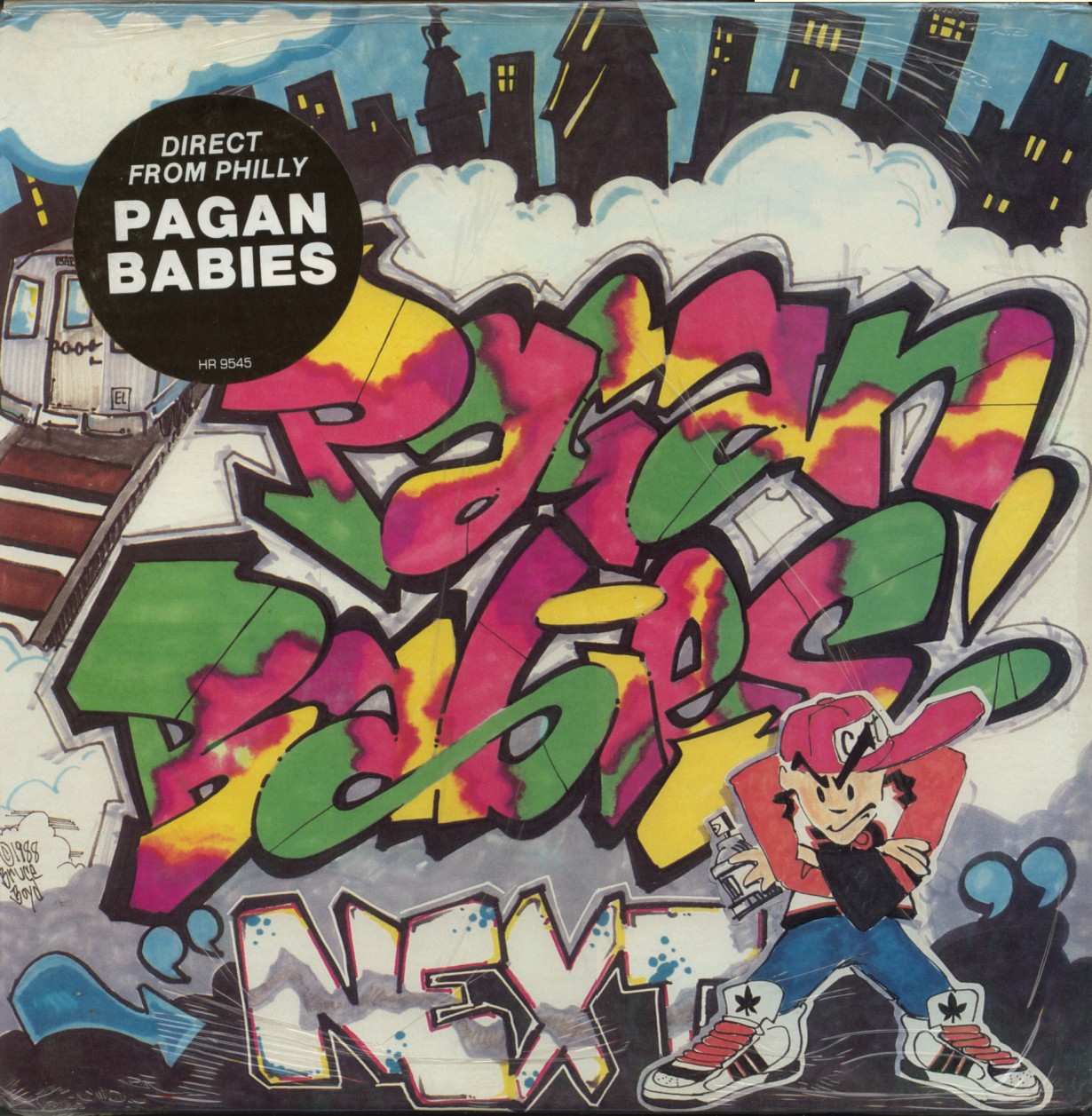 The Key: What was the impetus for this project? How long ago did you have the idea and when did it become more of a reality?

Freddy Alva: I’ve been mulling writing a book for the past couple of years now and what really inspired me is seeing a couple of old friends from the HC scene that managed to write books on subjects dear to our hearts and what we went through growing up being involved in punk and hardcore. I went through a short period of looking for an angle to focus on and literally overnight the title and subject matter came to me. I will say this is partly because I’d written an online article about three years ago outlining the connection between hardcore and graffiti. This stayed in the back of my mind and really blossomed into a full-blown concept on New Year’s day of 2016.

The proposal I came up with got a great response from DiWulf publishing; they agreed to back it 100% and invested all their resources to make it a reality. From that point it took about a year and a couple of months to gather material, conduct interviews, do research and just basically learn on the job all the nuts and bolts of putting a manuscript ready for publication. I can’t thank my editor Steven DiLodovico and layout designer Orlando Arce enough for going above and beyond to make the finished product something we’re all extremely proud of.

TK: Both graffiti and hardcore music are oftentimes misunderstood as artistic expressions, much less when it comes to them being a way of personally expressing yourself. For folks who might not have a background in either of them: what is the appeal to you of graffiti and hardcore?

FA: My take on it, having being immersed in both subcultures for several decades, is the shared kinship that’s at the heart of their collective beginnings. In short; they were both youth-driven movements making use of limited resources, creating mediums of expression that on the surface might seem simplistic and rudimentary. Scribbling your name on a wall in 1968 and playing three chords in 1980 are allied aesthetics as it’s encouraging one to just go out and do it, formal training is not necessary and you learn from your peers; creating something out of nothing.

Graffiti has come a long way but if you were to say that you did that to the average person in the 1980s: they would look it as an affront to society’s standards and a telltale sign of urban blight; a dirty and illegal activity that only people from a certain socioeconomic strata engaged in. You can apply the same sentiment, albeit on a much smaller scale, to the hardcore/punk underground in that bygone decade.

I’ve always been attracted to modes outside the norm and these movements helped me find my voice and make sense of my surroundings. Expression is where you can find it; I believe that these have been worthwhile pursuits for myself and others growing up in tumultuous times. The book chronicles that relationship and the its far reaching influence.

TK: Obviously neither graffiti nor hardcore music have gone away. People are still writing and folks are still creating loud, angry music. What roles do you think both these mediums play in present-day society?

FA: I think both haven’t disappeared as there is still plenty to be angry about in the world today. Without going into a diatribe; whoever’s reading this with any common sense realizes things are, well, really weird in the USA right now so I can think of how graffiti in NYC was a reaction to the Vietnam war in the late 60’s and how hardcore thrived during Reagan’s America so yeah I think these mediums can still play a critical role.

I realize Hardcore is not the same as three decades ago, what with the assimilation of its sonic drive, but none of the fury, into multiple sub-genres. Graffiti has also morphed into a bastardized version of itself, called “Street Art” by some, but these are all a moot point to me. To this day I can hear a new HC band made up of teenagers all over the world and those same kids may be taking up spray cans in an effort to emulate a writer that they saw on repeated viewings of the deluxe ’Style Wars’ reissue. So yes; I am an eternal optimist in the belief that this all will lead one day to a new way of channeling the energy of these collective subcultures without diluting their idiosyncratic essence.

TK: What are you looking forward to as far as the Philly events? Are there any Philly writers or bands you want to shout out? I know Pagan Babies are always thought of as one of the bands that pushed the graffiti crossover but what other Philly connections are there?

Besides JUICE from the aforementioned Pagan Babies, another Philly writer named ESPO was a hardcore guy and the guys from Steppin Razor put their band’s name up so much that people thought it was a writer. In my book we mentioned Philly legends like CORNBREAD, TOP CAT. also props to COOL EARL and 80s writers like BABY 137, KAPE, CEE 67, KADISM, DAZER, SUROC, DAZZLE, TAZER, CHARM, PRE and many more. The Key: Why were you interested in this book? How does it fit in with what DiWulf is doing?

Steve DiLodovico: We were interested in publishing Urban Styles because the history that it covered was something I hadn’t really seen covered in any books, documentaries, etc. before, and we felt like it would be a unique take on both graffiti and NYHC. Neither Amy nor myself had any background as far as graffiti goes, which is one of the reasons why I was really into doing the book: I wanted to learn about the NY graffiti scene.

Amy and I both come from punk rock, I lean more towards the hardcore side of it. Amy spent years doing a ‘zine called Hard Times and I did a lot of writing about various scenes over the years. Amy and I co-authored No Slam Dancing and we worked on it for years. After being rejected by more than a few publishers we decided to publish that book ourselves.

From there we started talking about publishing other authors that covered history and subculture, and we were both really into it, so we decided to make DiWulf a thing; we run it on punk rock esthetics and kind of fashion ourselves after some record labels that we grew up admiring.

When Freddy reached out to me and told me about “Urban Styles” I was into it from the beginning. I knew Freddy from the “New Breed” tape from 89 and was a big fan of that, and I had met him a few times. “Urban Styles” seemed a natural fit, and I think they way me and Freddy vibed once we started talking about it was what solidified the idea that we wanted to work with him.

The Key: Do you hope to publish more books on punk and hardcore culture and history?

SD: We definitely will publish more books focusing on punk and hardcore: we have a book we’re working on from Ray Parada that showcases the photography of Karen O’Sullivan and the early 80s pictures she took of youth culture in NYC. A lot of that is entrenched in the hardcore scene, but it also captures a lot of early hip-hop and other aspects of underground nightlife. It’s not really what you’d call a “scene book” it’s more of document that focuses on people and culture, as opposed to bands and shows. The photos are amazing, and it is going to be a beautiful book. After that we have a few ideas in the works that won’t have anything to do with punk and hardcore. We don’t want to limit ourselves; we are interested in anything out of the ordinary, anything that is a different take on subculture, whether it is art, literature, music… whatever.