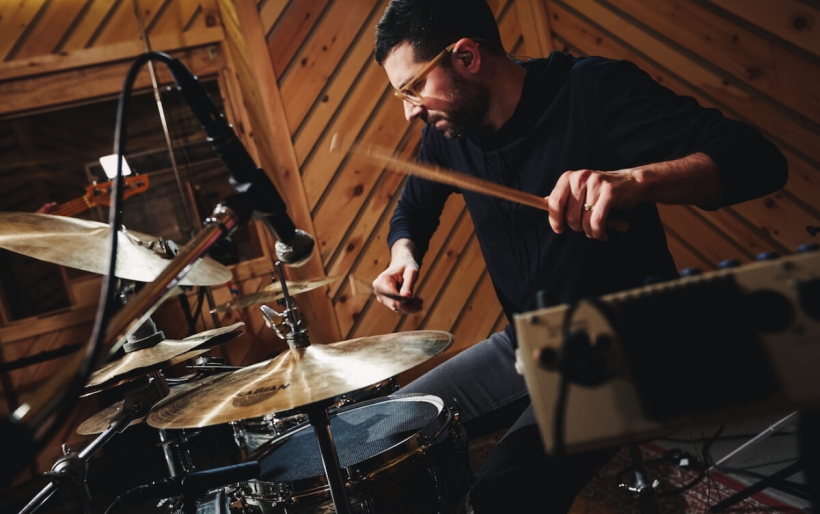 Mark Guiliana | photo by Deneka Peniston | courtesy of the artist

To some extent, I’ll forever associate David Bowie’s Blackstar with Christmas. The day after it was released was the day we dismantled our Christmas tree that year, so the iconic singer’s magisterial swan song became the soundtrack to the end of the holiday season. Of course, one day more and we’d learn the devastating news of Bowie’s death, but at least there was that brief period where we could enjoy the elusive mysteries of Blackstar without the tragic associations.

Beyond the fact of its late-career brilliance, one of the reasons I was so drawn to Blackstar was my familiarity with Bowie’s band on the album, the members of saxophonist Donny McCaslin’s stellar quartet, including drummer Mark Guiliana. This year, Guiliana bolsters that Xmas connection by kicking off the year’s final calendar page with his own quartet at the Philadelphia Art Alliance on Friday. Although much of his work as a leader involves genre-warping experiments with electronics, the Mark Guiliana Quartet – with saxophonist Jason Rigby, pianist Fabian Almazan, and bassist Chris Morrissey – eschews the gadgetry for a more straightahead approach. The results of those experiments still shine through on their latest, Jersey (Motéma) – with taut grooves, whiplash-inducing rhythmic shifts, and entrancing melodic twists that would sound as urgent plugged or unplugged. [TIX / INFO]

Of course, the holiday season is just as much about home, and December offers its fair share of local greats either coming back or sticking close to home. Also on Dec. 1, the Philadelphia Jazz Project kicks off a six-month series of concerts paying tribute to native Saturnian and longtime Philadelphia Sun Ra with eight concerts collectively dubbed “Satellites Are Spinning: A Sizzling, Sonic Celebration of Sun Ra.” The eight-concert series will feature artists associated with and inspired by the iconic (and iconoclastic) bandleader, beginning on Friday at the Barnes Foundation with Intersection, an octet led by Arkestra saxophonist Terry Lawson. Future concerts will include Arkestra guitarist DM Hotep, Sonic Liberation percussionist Kevin Diehl, Prime Time guitarist Charles Ellerbe and dancer Raphael Xavier, among others. [TIX / INFO]

One thing worth celebrating as the year draws to a close is the two decades that J. Michael Harrison has spent on the air in Philly, hosting his wide-ranging Friday night show “The Bridge” on WRTI. Three local saxophone greats will help Harrison mark that landmark, as he’s been doing throughout the year. First, legendary saxophonist and Coltrane acolyte Sonny Fortune will lead his band at South this Saturday, Dec. 2. A week later, on Dec. 9 at the Clef Club, altoist/bandleader Bobby Zankel will toast not only the longevity of “The Bridge” but the release of his own new album, Bobby Zankel and the Wonderful Sound 6. That album was recorded on the occasion of another celebration, in this case of bass legend William Parker’s 65th birthday at the Painted Bride earlier this year. That band – Zankel, Parker, pianist Dave Burrell, violinist Diane Monroe, trombonist Steve Swell and drummer Muhammad Ali – will reunite for the occasion and be joined by tenor legend Odean Pope. [TIX / INFO]

Philly jazz has no bigger booster than “Sista in the Front” Rhenda Fearrington, who shows off her own soulful voice at the Philadelphia Museum of Art on Friday, Dec. 8. If the always infectiously merry vocalist can’t get you into the Christmas spirit, no one can – and with Rhenda on the stage, there’s guaranteed to be one front row seat left available. [TIX / INFO]

The line-up at Chris’ Jazz Café is a virtual month-long family reunion, which weekend visits by several generations of local artists – from octogenarian tenorman Bootsie Barnes to in-demand bassist Mike Boone and trumpet scion Duane Eubanks, to rising stars like trumpeter Josh Lawrence and third-generation saxophonist Chris Oatts. But most exciting is the homecoming of Kurt Rosenwinkel to close out the month. The guitar great’s last couple of performances have been with his Brazilian-influenced Caipi band, but for this three-night run he returns to his jazz roots accompanied by Boone and legendary drummer Victor Lewis – and, as a special holiday treat, fellow six-string wizard Peter Bernstein as special guest. [TIX / INFO]