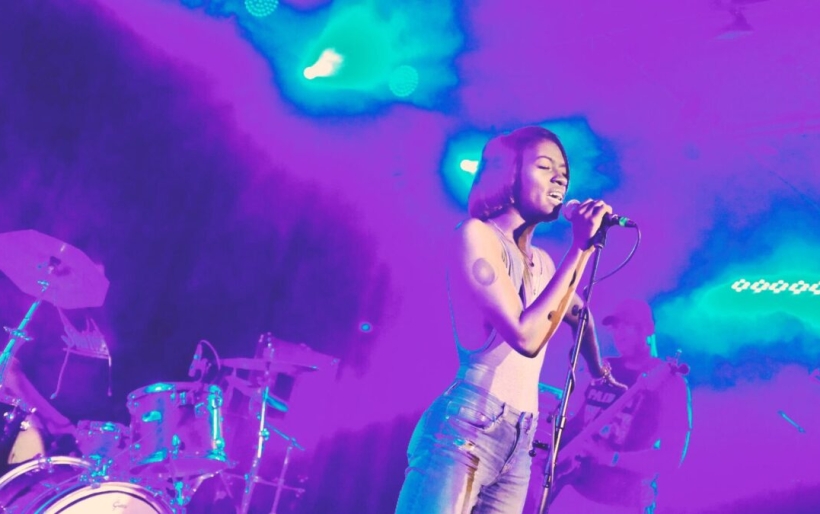 Year-End Mania is the Key’s annual survey of the things below the surface that made 2017 incredible. To kick off the series, Key editor John Vettese recaps six of his favorite Philadelphia music discoveries from the past 12 months.

Earlier today, I was listening to a conversation with Johnny Brenda’s talent buyer Chris Ward on the 25 O’Clock podcast, and he made a very interesting point. The bumper crop of musical talent in Philadelphia, or what is often perceived as such, is no sudden phenomenon. It’s not as though, pre-2006, the city was in some dire straits or a lesser creative state, and has subsequently grown and evolved to the present-day bursting of the proverbial seams.

The truth is that amazing music — rap music, rock music, pop music, soul music — has always existed in the 215; in many cases (the Gamble & Huff era), it’s downright thrived. But as Ward pointed out, a more recent confluence of factors and persons and places and institutions over the past decade (like him and JBs, I might add, or like our friends at The Deli and Jump, or like countless others) have helped amplify the scene tremendously.

Every year around this time, as we launch into The Key’s annual year-in-review extravaganza, I begin by sitting down and reflecting on the new artists and new-to-me artists who, over the past twelve months, have knocked me sideways. There have always been artists like this in Philly, whether or not the outside world is paying attention. And there always will be; even if, at some point, the zeitgeist declares Philly to be “over,” if you look and listen, you’ll find them continually creating, somehow, somewhere.

We are privileged to live in a time where we don’t have to look too hard. Here’s who I found this year.

Over the winter, I invited Philly’s Mars Parker — one of last year’s Year-End Mania discoveries — into the studio to play live for a Key Session, and he brought with him a band that included standout backing vocalist Aleana. Appearing on the slow-burner “Selfworth,” she provided what I described at the time as “a stunning, introspective counterpoint to Mars’ verses,” and tagged the studio wall with her own social media handles before departing. Impressed, I looked her up and found a 22-year-old artist who was supremely self-assured in both skill and style, with undeniable nods to contemporary hitmakers like SZA (the haunting, deconstructed take on R&B and electronic pop in her music) and icons like Erykah Badu (that VOICE, omgz). But the real breakout moment, for me anyway, was when I saw her again several months later, captivating the sold-out house in her set opening for Hardwork Movement at Underground Arts. Going on first of three bands is no easy feat; oftentimes you have to contend with fans of the headliner who are mostly there to grab beers and have conversations until the closing set rolls around. But Aleana managed to not only deliver a killer performance in the face of that, she noticeably got the din to die downand focus inward as she delivered ruminations on love, betrayal, escape, and dreams. Her most recent project, Chemical XXI, was released two years ago on her birthday; a standalone single, “S.O.S.,” followed it up late last year. And while I’m no prognosticator, I do know her birthday is rolling around once again in a few weeks, so hopefully we’ll hear something new from Aleana before 2017 is out.

Funny how one year’s discoveries lead to the next year’s discoveries. Harmony Woods was at the top of my list in 2016, and by all accounts had a pretty terrific 2017. Included in that was a release show for their album Nothing Special at J.J.’s Diner, where band leader Sofia Verbilla surprised us by sitting in with Nazareth indie rock players Major Pursuit, the project of songwriter Olivia Bellito. I promptly downloaded everything on their Bandcamp, where it turns out they’ve been releasing sensitive, introspective music for a couple years — the 2015 LP We Don’t Make Mistakes, We Have Happy Accidents makes for beautiful listening, even if most of it is hushed recordings of just Bellito and their ukelele. But the gig, though; rocked up full band with members of Beach Bod and Grayling on the rhythm section, Major Pursuit sounds kind of (you guessed it) major. It’s emotional, it’s energized, it’s endearing. Like the folks in scene peers Coping Skills, Bellito has a charismatic and funny personality that has you holding on even during the tuning breaks. And that cover of “Goodbye Earl” by The Dixie Chicks; WOWZERS. “It’s a feminist anthem,” Bellito told the crowd at J.J.’s. “If somebody hits you, murder them!” When I met them a few months down the road, Bellito apologized that the Bandcamp stuff sounded nothing like Major Pursuit’s live show, and I said it was totally chill; it’s how Kississippi’s recordings were at first, after all, and that band’s growth has been wonderful to watch. Here’s hoping for the same with Major Pursuit.

Coming up in the dreary suburban banality of Montgomery County in a not-exactly-musical household, I had a pretty limited worldview. There were rap kids, and there were punk kids, and the two worlds (for various sociocultural reasons) rarely overlapped. I knew I liked hip-hop, I knew I liked heavy rock, but it was years before I decompartmentalized them beyond the ill-fated nü-metal rap/rock era. But, like, why wouldn’t the two intersect? They share a lot of the same concerns, from outcasts trying to find their own sense of community to advocates speaking out against social injustice and intolerance. Given that, it should surprise absolutely no one that West Philly’s Ronnie Vega is an artist who mixes unflinching lyrics about police brutality, mass-incarceration and the inequalities of a racist society with slammin’, riff-roaring, head-banging punk. “We blend elements of all of our roots to produce something that evades the typical genre categories,” Ronnie Vega told Afropunk when the song “Therapy” premiered earlier this year, and that amalgam of experiences applies to their thematic outlook as well. Watch the video for that song below, and dig into The Lost Vega Vol. 1 over at Bandcamp .

So this year, I’ve been doing that whole Items Tagged Philadelphia project, and it’s kind of bonkers. Not just in the sheer volume of Philly music I consume on Bandcamp each week because of it, or for the encouraging amount of that music I wind up digging enough to write it up — but also the next level artists I come across that I might not have found otherwise. Sea Offs are one of the latter. A project of two State College friends, Rashmit Auroroa and Olivia J. Price, the band makes pensive, meditative folk that ties together atmospheric instrumental arrangements of guitar, synth and distant horns with Price’s soaring and emotional vocal delivery. Like I said at the time, “if you Beth Orton, Ida, Land of Talk or Laura Marling, you will find lots to love here,” and the What’s The Point? album is totally the place you should start. From there, proceed directly to Sea Offs’ Key Studio Session.

Will Lindsay has been a fixture in the Philly scene for as long as I’ve been editing The Key, and I can say with all honesty that Caracarais the best thing he’s ever done. His roots are in the somewhat eponymous band W.C. Lindsay, which admirably dabbled in the anthemic pop punk of the Modern Baseball circuit. But fused with bubblegum electronics, it was never easy to tell how seriously I should take him. Are his songs sincere? Are they sardonic? Meeting him in person, it was always clear how dedicated he was to his craft, but I couldn’t entirely make heads or tails of the result — in intent or in practice. After dabbling in gritty garage rock with MoBo / Steady Hands’ Sean Huber in the asskicking Vicky Speedboat, Lindsay emerged this year with a new collaboration, this time with Sean Gill and Carlos Pacheco-Perez of impressionistic instrumental soundscapers Square Peg Round Hole. The combination was perfect, and on Summer Megalith, we get appropriately intense and driving arrangements to cue us in on how we should be feeling (no, really) when we listen to Lindsay’s world-weary, existential lyrical unburdenings. A glowing Pitchfork review zeroed in on the album’s more nuanced reference points — Pianos Become the Teeth, The Twilight Sad — and the band has played a string of impressive shows around town with horns, cello and backing vocalists recreating the album’s bigger-than-life sound. Let’s hope the momentum behind this release propels Caracara into an awesome 2018.

Artists that can span disciplines always impress me, but the fact that Kingsley Ibeneche so gracefully moved from ballet and modern choreography to singing and writing songs…well, I guess I shouldn’t be that surprised, right? Dude is a dancer, dancers are graceful. But CHi, Ibeneche’s self-released debut, is very very good, a fully realized set of songs from an impressive new voice. He’s no dabbler or dilettante when it comes to songwriting, or production, or singing with a thrilling and dynamic delivery — he’s clearly a person who goes all in on whatever he does. The album draws on rock and pop, blues and soul, all with an alluring electronic undercurrent care of collaborator Lee “LeBeet” Clarke. Meanwhile Ibeneche’s lyrics focus on identity and experience, both real and imagined; he was born and raised in Camden, New Jersey, but thematically used the record to voice the experience of a Nigerian man in America, “insecurities, fears, hopes, dreams.” Listen to the record below; see and hear more in Ibeneche’s Key Studio Session.

Honorable Mentions: Guitar gymnastics and feminist art-rock from Ellen Siberian Tiger; a serious dose of revolutionary social criticism from Key scribe Alex Smith in Solarized, who I like to call the Fugazi of Philly in 2017; shy introspection and hooky melodies from basement show faves Weller; asskicking rock and roll from Resilient; suave crooner Zeek Burse and his knockout band spanning jazz and rock and funk and soul; poetic musings and propulsive emo from Marissa D’Elia and friends in Small Circle.