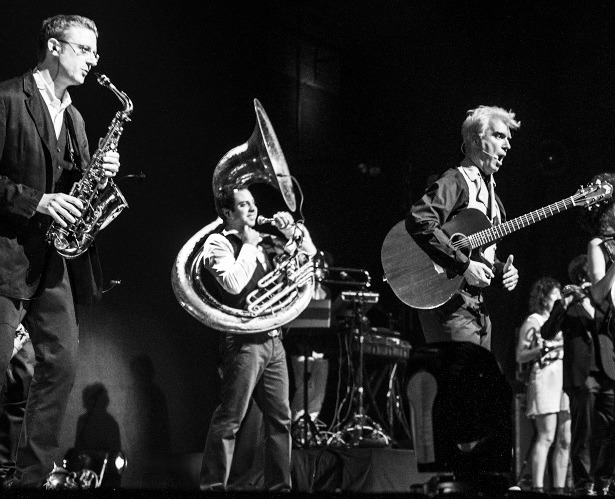 When David Byrne last played Philadelphia, it was at the Tower Theater during his collaboration with St. Vincent, Love This Giant — where the stage was wide open and filled up with horn players, various guitarists and a keyboard station up on risers. Byrne found the setup freeing and inspiring, and is patterning his 2018 run off of it.

As he posted in an announcement on his Facebook page earlier today, Bryne developed an even more open design for his current run of shows, which will include material from a new album he’s releasing in 2018. Working with Clair Brothers in Lancaster County, Byrne developed a setup that made the stage a completely blank canvas, free of risers and drum platforms, free of monitor wedges and hovering stage-hands.

“I’d experienced a taste of this on the tour I did with St. Vincent, where all the brass players were mobile,” Byrne wrote. “With everyone mobile, I realized the stage could be completely clear. If we could have the monitors in our ears, the amps off-stage and the lights up high, then we had the possibility of a completely empty space.”

His six North American dates – plus two in South America and two in Europe — will road test this new setup, as well as new songs “…and many others that will, I assume, be familiar. I’m excited. This is the most ambitious show I’ve done since the shows that were filmed for Stop Making Sense, so fingers crossed.”

Though the production does not come to Philadelphia, the North American dates include a stop at Wilkes-Barre’s F.M. Kirby Center on Sunday, March 4th and the Hershey Theater on Wednesday, March 7th Tickets are on sale this Friday, December 15th; more information can be found at the XPN Concert Calendar. Below, read Byrne’s full statement and see prototype photos of the set.