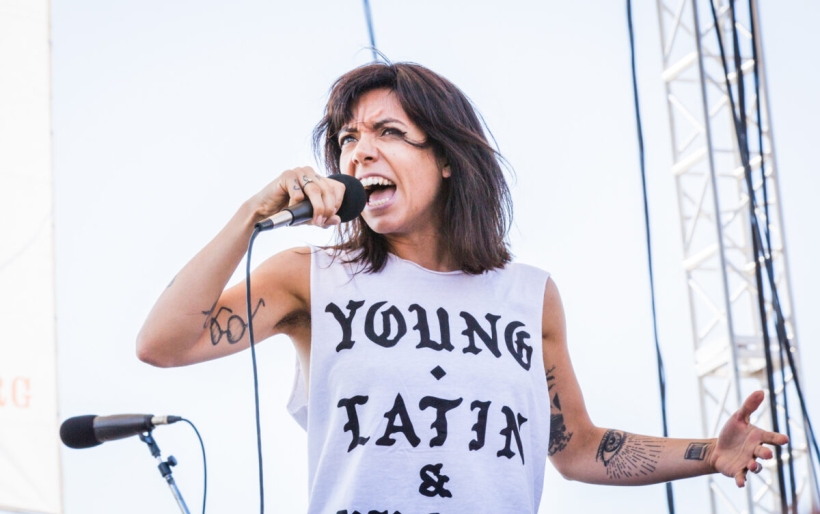 Hurray for the Riff Raff | photo by Wendy McCardle for WXPN

Year-End Mania is the Key’s annual survey of the things below the surface that made 2017 incredible. Today, Key contributing writer Maureen Walsh reflects on songs that echoed the complicated feelings of the year.

Last year, I was hoping that 2017 would be a time for healing. Welp, that didn’t go as planned. This year, we learned a lot hard truths. Some of these truths made a lot of us anxious and angry. Artists were anxious and angry too and used their art to reach out to us so we could all feel together.

Logic’s single begins with thoughts of suicide, not a common theme on pop radio. By the second verse, other vocalists chime in representing the desperate thoughts in the protagonist’s head. Some are words of hope, others are words of defeat. By the end guest vocalist Khalid declares “I don’t even wanna die anymore,” and the protagonist has overcome his fears for now. The song’s title is the National Suicide Prevention Hotline and the song has also served as a lifeline for those having trouble coping in these tumultuous times.

“Pa’lanté” by Hurray for the Riff Raff

I first heard this song at HFTRR’s performance during the Non-Comm Convention back in May. Many of the artists performing were angry about the events of the past few months in our country but lead singer Alynda Segarra’s lyrics were the first I heard on the topic that gave me hope. The word “Pa’lanté” means forward. The entire album The Navigator is about Segarra’s relationship with her Puerto Rican heritage and her relationship with her childhood in The Bronx. Alynda Segarra used this song as an anthem for listeners to pick their heads up and move forward with pride.

The events of the latter half of 2016 into this year have been jarring for many of us. For so long, many took for granted the comforts and privileges that they thought existed. We have all learned that people of the arts, politics, and journalism have abused their power to demoralize others. The rug has been pulled out from underneath a lot of us. While some are scared, the band Cayetana have gained strength and are ready to throw down for what is right in this world. “Bus Ticket,” is a realization that it is up to us to to look out for one another.

Over the past year, I have seen both Xenia Rubinos and Sammus live and both are inspiring as all heck. When I saw that the two had collaborated with producer/musician Olga Bell to create a song for tune-Yard’s CLAW project, I was on board. The result is a song that takes White America to task asking if we really understand our privilege and what it means to be an ally or if we’re all talk. It’s an important message and a conversation that is evergreen.

The opening track of Gorillaz’ Humanz album is this jarring and urgent tune featuring rapper Vince Staples. Staples, who is never shy about telling it like it is, imagines what the next few years will be with Brexit and a Trump presidency happening simultaneously. The result is his telling us to party and dance before a potential end times. The line:

this the land of the free
Where you can get a Glock and a gram for the cheap
Where you can live your dreams long as you don’t look like me
Be a puppet on a string, hanging from a f***ing tree

sums up perfectly what 2017 has been like for many in this country.