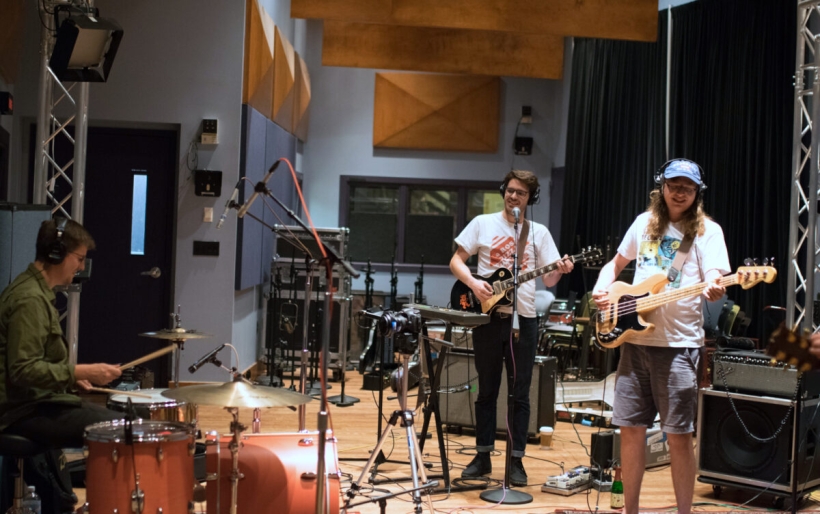 Year-End Mania is the Key’s annual survey of the things below the surface that made 2017 incredible. In this installment, we bring you the ten most popular Key Studio Sessions of the year.

The band is instrumentally complex — you’ll hear no three-chord bruisers in this set — but never overly so, flexing its skill while keeping catchiness and accessibility in its sights. [Singer-guitarist Erin] Fox has the charisma and dynamism of classic frontpersons like Joan Jett and Billie Joe Armstrong, and her elastic and impressive vocal range hits me in Thom-Yorke-by-way-of-Jeff-Buckley feels.

What followed was something kind of magic: Louie Louie used the moment to harness the transformative power of their music, tearing across four songs from their upcoming debut LP Friend of a Stranger and pouring the collective emotions of the room into their set. In this context, the refrain “I know I’m strong, I’ll get along” on the doo-wop leaning gem “After Me” took on a new meaning, and in a video of that performance, you can see the bold determination and confidence in Robb’s delivery. This will not hold me down, it seems to say. Not even close.

Yes, the amplifiers are cranked — crushingly so, and used brilliantly to sculpt sound in breathtaking ways. “I’m Only,” the first of two new tracks the band debuted in their performance this week, is one of their hardest-hitting songs to date — it hammers right out the gate as syncopated beats, staccato chords and howling string bends pummel their way into a languid and drifting verse. Next to Bardo Pond, Creepoid probably possesses the best understanding of volume and vibe out of anybody we’ve recorded in this series.

After a buildup from gentle arpeggios to buoyant lead licks from guitarist Fabian Mera — who sways back and forth when he plays in a way that reminds me of Dr. Dog in the early days — we see singer-guitarist Matthew Gragg taking a solo when, while hitting a chord fervently, he gets the his guitar tangled in his headphone cord. He keeps playing, the headphones get more tangled, and ultimately they topple forward, hanging off his neck until the end of the verse. We’re back in breezy midtempo territory at that point, but not really, since this sort of immersive playing from The Vernes can make even the quietest song electrifying.

Sonically, Weller is all about hook-driven power trio power pop; [singer-guitarist Harrison] Nantz’s narrative lyrics and nervous deadpan channel The Weakerthans and Modest Mouse in the best way, and he vividly hones in on the feeling of that post-college, pre-adulthood crash. Somewhat literally in “Record Breaker,” where a car crash becomes a metaphor for cutting ties with the problems of the past, resolving with a triumphant coda “Write a clue cause I think you read it / Write a book from a new perspective / Write that book let the pages get shredded / I won’t miss this from any direction / Reset and just forget it.”

The King Of No Man, out on Run for Cover Records, is a reflective set of songs about mortality, loneliness and disconnection, and it finds the band’s craft in top form. Which makes sense, as they’ve been at it for a decade. … Today, [Bobby] Barnett and [Leo] Vegnetti are joined by Zack Charette on bass and Bill Orender on drums, and they visited XPN studio this week to preview a few more songs from King, two from each songwriter. As much as the bandmates try to keep the atmosphere light and casual — Vergnetti introducing the propulsive punk of “Cannonless” as a song about Mario Kart — there’s clearly a lot of emotion and sensitivity driving it.

With all these disparate elements in play, her band Ellen Siberian Tiger is a unique and wholly captivating listening experience. … The blend of music school complexity and basement show grit reminds me of 90s faves Helium; the dramatic and sorta jazzy flair to [Singer-guitarist Ellen-Tiberio] Shultz’s vocal delivery has a Regina Spektor quality to it; and her vivid and poetic lyrical landscapes feel rooted in the work of Patti Smith, a stylistic influence (whether conscious or un-) on “Cinderblock Cindy.”

The band — singer guitarists Eve Alpert and Kasra Kurt, bassist Gerasimos Livitsanos, drummer Hugo Stanley — came to town with its debut LP, Trading Basics, in tow. It was loud as hell, but it wasn’t straight up noise; it had foot-stomping rhythms, short-sweet songs and playful melodies, but it was too weirdly intricate to be pop. Instead, the band inhabits this outerzone of intertwining guitar lines and studious meters, of unabashed dissonance and ear-candy tones. Alpert and Kurt’s voices echo that push-pull, often presented in call-and-response style. It’s like a frantic conversation about nerves and fears, about euphoria and joy.

[Marissa] D’Elia’s voice is hushed and haunting, displaying a quiet confidence as it embraces those moments where confidence fails — take “Please Don’t Touch The Moon,” where she sings “if you are the moon / then I want to be the sky / I’m not one to shine as bright / owning your imperfections by projecting your own light.” Or, from “It’s Just Not Realistic”: “in another universe I’ve had my coffee and texted back / but in this one I stare my ceiling thinking of anything but that.” Call it an introvert’s perspective as they step outside; why, it seems to ask, don’t we accept that most of us have it both ways to some degree, craving company every bit as much as solitude?

In addition to [singer-guitarist Jake] Ewald, this configuration of Slaughter Beach, Dog features Nick Harris of All Dogs on lead guitar, Ian Farmer of MoBo on bass and Pat Ware of Spraynard and Nona on drums. The session ranges from the catchy and clever “Your Cat,” which delightfully imagines feline reincarnation, to an unbelievable performance of “104 Degrees,” which transforms from an account of bonding with a bookstore crush over Murakami to an epic noise jam of Sonic Youth proportions “as ‘Heavy Metal Drummer’ plays us home,” like the lyrics go.