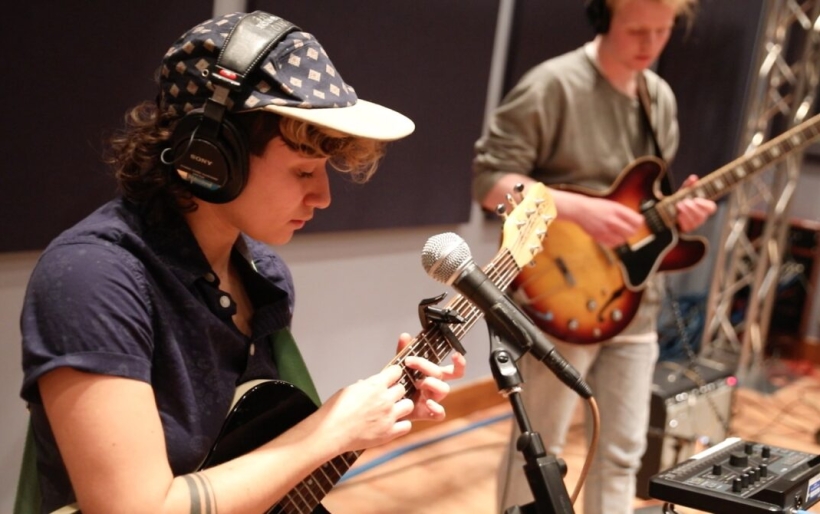 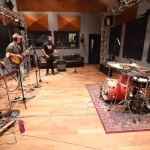 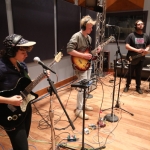 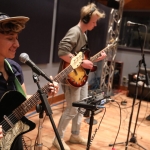 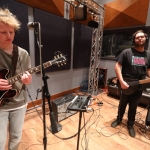 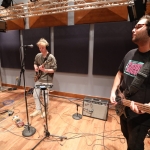 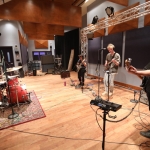 An old friend once made an observation about Ani Di Franco’s classic live album Living In Clip that’s stuck with me for 20-odd years: you can hear it in Ani’s voice when she’s smiling.

Even when the songs are devastatingly tragic, or fuming with rage, listening to the record (or, honestly, Ani’s entire catalogue) is a total joy, because at the end of it all, there’s this warm beacon of hope staring down an uncompassionate world, this realistic optimist standing at the microphone and singing words they wrote that, for that moment anyway, have the ability to make them happy…and by extension, make others happy.

I don’t bring that up to necessarily align Philly’s Allegra Eidinger to Di Franco in a musical sense; yes, both are masters of the fretboard-tapping guitar licks like you hear in folkies Tim Reynolds and Kaki King (or twinkle emo bands like Cap’n Jazz and Marietta). But beyond that stylistic affect, AllegrA the band has a sound all its own; bits of classic 70s singer-songwriter music in a Janis Ian sort of way, an effervescent energy straight out of the basement show scene, and a singing voice more mellifluous and honest than many of the band’s peers.

That idea of hearing a smile, though. That’s something that Eidinger carries forward into their work, whether intentionally or subconsciously.

Take “I’m An Introvert,” the lead single from AllegrA’s self-titled record released late last year on Sad Cactus Records; it’s a toe-tapping story about the awkwardness and frivolity of social interaction, specifically making small talk at parties. “What do you think happens when we die? / Existential talk replaces looking me in the eye,” sings Eidinger, and you can hear their grin getting wider as the lyric unfolds. It’s a true-to-life sentiment, and that lively observational approach across tracks that detail experiences of uncovering toxic flaws in friends (“Bad Habits”), living in West Philly (“42nd Street”) or just plain crushing on everyone you see (“Cuties”).

Comprised of Eidinger alongside Anthony Vargas on drums, Adam DaSilva on bass and Sam Huntington on guitar, AllegrA breezes across five songs in 14 minutes during this week’s Key Studio Session. Two come from the self-titled album, two are early singles, and one — the jaunty and dynamic “On The Ground,” which you can watch a video of above — is very new. Over pensive verses that launch into firework refrains, Eidinger sings about embracing vulnerability and wearing one’s emotions on one’s sleeve (or in one’s voice), something that seems to echo AllegrA’s bio: “small. queer. lots of feelings.”

Listen to the band’s Key Studio Session in full below, and catch them on tour this winter; they kick off a week-long New England run at Everybody Hits on January 21st, wrapping on the 29th in Brooklyn. Full dates below, more information on the Everybody Hits show with Small Circle, Queen Moo and Snowhaus, at its Facebook Event Page.