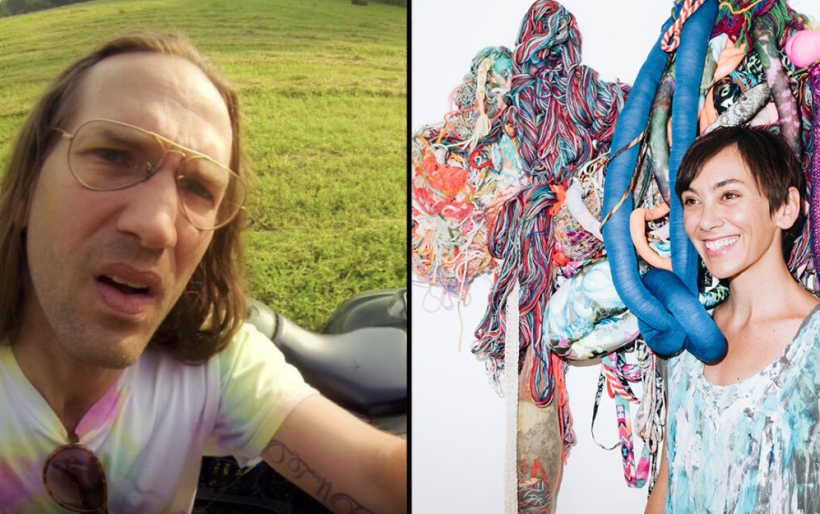 Inara George and Matt Whyte are going through some changes as late. The chanteuse from the bird and the bee and the one-time Earl Greyhound are moving beyond the celestial pop we identify them with into something heartier and more holistic, a la Whyte’s Rupe Shearns’ alter ego and his To A Deer Outside Ithaca release to say nothing of George’s gorgeous aptly titled Dearest Everybody. Plus the headliner George and the opening act Shearns are old buddies. So we got them to play Two to Tango before their Boot & Saddle date tonight.

The Key: What do you two know of each other or the other’s work and how long have you known that?

Inara George: I met Matt about 13 years ago, before I had ever heard any of his music. I was doing a little East Coast tour and he was friends with my manager. He actually stepped in as my temporary tour manager for a handful of shows. The first time I heard him play was when he and my bass player at the time, Chris Stillwell, nerded out in their love of Led Zeppelin by playing some songs during a sound check. I was floored by his singing and guitar playing. And then I became a fan of his band Earl Greyhound, and later sang backups for his most recent release as Rupe Shearns.

Rupe Shearns: Inara’s been a friend for a while. I’ve thought fondly of the gal for well over a decade now. In that time I’ve also stayed current with her various projects including the bird and the bee, solo work and work with Van Dyke Parks.

TK: Have you – in your respective bands – crossed paths? What was the interaction?

IG: Matt’s band opened up for the bird and the bee at some point, but I can’t remember when exactly.

TK: What business is it of yours going solo AND how do you feel that it is radically different than the band stuff we usually know you from?

IG: (laughs) That questions feels a little aggressive. I actually put my first solo album out before the bird and the bee’s debut album. That’s how Greg Kurstin and I met each other. He played keyboard on my first solo record “All Rise.” And I suppose my solo stuff comes from a more personal place. When you listen to the songs you’d probably get a better understanding of who I am. The bird and the bee gives me an opportunity to try on many different hats and play different characters. I adore being in the bird and the bee and I love the music that Greg and I make together. I think we’ll always make albums together, that’ll never stop. But it’s nice to have other outlets to experiment with different types of music and songwriting. I’ve found that having all my eggs in one musical basket is never a good way to go. I like to move around.

RS: I’m well outside any window where the move could have ruffled feathers… Earl Greyhound’s last album came out in 2010. I’m going for something a lot gentler this go round.

TK: Considering your respective new solo albums, what song came first in the process of recording: the one that defines the album and why does it define the album?

IG: I started recording at home. I put together a little studio in my bedroom and would spend nights, after my kids went to sleep, to record. The first song that I recorded was “Somewhere New.” I had the idea that I wanted the record to have a heavy background vocal component. But the voices would be more like instruments. So I guess that song sort of set the tone. Then when I brought some of the songs that I had recorded into Mike Andrews, my producer, we jumped off from there. Not to say that all the songs have that, but it was a place to start.

RS: The first track “Surf Burial”. It was the first I recorded and it’s the one that speaks most directly about death, where some of the other tracks on the record address it more obliquely.

TK: Are you solid being alone as a soloist without a band?

IG: No, I prefer to have a few people backing me up. I get nervous when it’s just me alone.

TK: Will the two of you chat before this show AND is there a plan of attack going into this showcase?

IG: We’ve been texting. And we’ll be playing two shows together before this show. So I’m guessing yes! And plan of attack. Not sure. Hopefully we’ll be blowing minds. Or something like that.

RS: I hope to, otherwise it will make for a lonely couple of shows that precede it. So no plan of attack…raw.

TK: How long have you been in the business of music and how do you think that time in has effected what you do, musically and lyrically considering your newest project and this tour…. I mean does it wear on you?

IG: I have been putting albums out since 1996, which just seems insane to me. I’m not sure the business has changed me. Just living and being a human has definitely changed me. I try not to get too caught up in the business of music. Not to say that I don’t understand the commerce element of the thing. I just try my best to make it about making stuff, and hope that I can find an audience.

RS: I put out my first EP in 2004 with Earl Greyhound. I’d like to think I’m able to write lyrics with more vulnerability and music with less caution. I feel less worn down making music at 40 than I did at 25.

TK: How do you see your audience? Is there a distinct level of interactivity between you and them, or is there a deep, but passive listenership?

IG: Probably both? Some people are very engaged, and some more passive. I try to just follow their lead.

RS: I strive for the former but end up with the latter. I tried to do a sing along at my show last week and I’m not convinced people weren’t just mouthing the lyrics.

IG: You always hope that the sound will be good. But if it’s not, you just have to adjust. I try to always stay in the moment onstage. I just do my best, and that usually keeps things fun.

RS: I always get nervous. It’s not fun but it drives me.

TK: What two songs of yours – perhaps, performed in a row – are geared toward having the most impact/biggest punch when played live?

IG: I have an a cappella song that seems to be very impactful during this set, and it usually goes into the most upbeat song on my record, Slow Dance. That combo usually feels pretty nice.

RS: I adapted a techno song on my record “Lowlight” to segue into a Baden Powell song I love.

TK: What song are you most curious as to how it will go over in a live setting?

IG: Well I’ve played all of these songs live, so I have a little understanding of how it will go down. But it’s always interesting to see how different songs affect different audiences. That’s what’s funny about playing live.

TK: What will you do as soon as your set is over?

IG: I tend to change my clothes into something warmer when it’s cold, or something dry when it’s hot, grab a drink and then come and say hi to people.

RS: Put my guitar away and watch Inara.

Inara George and Rupe Shearns play Boot and Saddle tonight at 8 p.m.; tickets and more information on the 21+ show can be found at the XPN Concert Calendar.