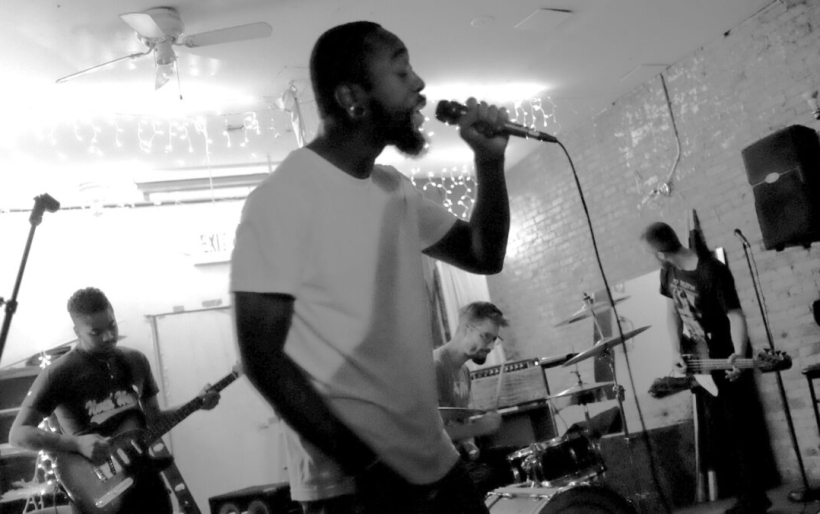 A light in an otherwise bleak universe, the star set to go nova that is Ronnie Vega traipses up and down Lancaster Avenue in west Philadelphia, his trademark white t-shirt reflecting the dull light of passing cars down the cantankerous two-lane. Spotting him out of the 10 trolley window, one couldn’t simply assume what his daily exploits were aligned with, as his gait, temperament and “in-the-cut” persona barely shifts; Vega is an enigma, at least as much as an outwardly sincere and introspective artist can be.

When he’s fronting his self-titled band, his vocals easily moving through the dense, foggy backbeat the band provides, Vega is fully immersed in his element. Despite the band’s heavy, tumbling swaths of moody, cinematic noise — drenched in the residual riffs of Black Flag’s “My War” all tied together with the leylines of a lost early period Public Enemy record — Vega insists on regaling listeners with tales both west-Philly-centric and universal. Vega doesn’t mince words: dodging the po-po, hood drama, and dealing with depression are all themes that find a home on the band’s two albums (The Lost Vega. Vol 1 and Demos2015). As well, the topics and perspectives that Ronnie, a brotha raised in the Philly streets, brings to light rarely find a home at the typical, DIY punk shows that Ronnie Vega often blesses.

Despite his aggressive, sometimes polarizing lyrics, Vega is a real chill dude. His laidback aura allows him to be an observer in a hostile environment that demands he be more of a participant. For Vega, it’s about balance, choosing when to rage, when to tear at the machines. We sat down with the rapper and discussed channeling that rage, that confusion, in an increasingly politicized world.

The Key: Was Ronnie Vega always conceived as a rock band? What was the catalyst for foregoing electronic beats and samples for a live, punk-influenced set up?

Ronnie Vega: Well, Ronnie Vega wasn’t just a name I came up with, it was an ideology of mixing Philly’s local street culture with punk influence. But I started writing rhymes to old 80’s synth-type beats, would rap over them, So I think I would say I’ve done the electronic and traditional thing for a while. But as I grew through life, the more dark and honest things I’ve seen, the more I wrote about it.

Ian Winter (bassist): Kyler (George, drums) and I were in punk band called Wet Food that played a bunch of shows at LAVA, where I met Ron. Ron and I had talked about wishing there were more rappers / bands that blended punk and hip hop. We both had the same short list plus a few songs by punk bands and a few songs by rappers that were exceptions in their catalogs. We came up with the idea of Ron doing a verse on a Wet Food song. (Wet Food was never one of the “cool” Philly hardcore bands, which gave us more freedom to do things that the spiky jacket crowd might have been afraid to do.) We never got time to practice, but Ron improvised during Wet Food’s last set and the song sounded dope. The bass player of Wet Food moved to Florida so we decided to just keep rocking with Ron. We thought of some different names for the band [which also features guitarist Christo Johnson], but in the end decided to just use Ronnie Vega (which Ron had been using previously) ’cause we liked the idea of the focus being on the rapper rather than on the band.

TK: What separates Ronnie Vega the performer and the band? Is there a different mental or artistic approach to performing with a band, as opposed to sitting alone in a room with a beat tape?

RV: Ronnie Vega is more of an artist, but as far as Ronnie Vega “the band,” we’re all performers. Every one of my band mates have been in multiple bands, Me, on the other hand, never had a live show until I joined the band. There isn’t much of a difference mentally, but I feel that it’s more entertaining to play with a live band than to rap to a beat tape.

TK: With songs like “Scumbag,” there’s a real tension between wanting to be an informed, aware person and being, well, a scumbag. How difficult is it, in 2018, balancing mental health and personal stability with wanting to actively organize against or protest society’s greater problem?

RV: Well, I’ve dealt with mental heath my whole life. But to answer your question, the song “Scumbag” was about embracing your flaws, being who you truly are, at the same time acknowledging that people don’t see the world the same way you do. There’s many people on this planet that fight for other people’s rights and freedoms, but [are] scared to fight for their own. Me being a rapper/MC was my way to fight for my rights and what I believe in.

TK: That’s real about experiencing mental health complications. Do you find it difficult to put that into a musical context? Was there a certain point where you were like, “I’ve got to put this into writing or things are going to get weird”? What other ways have you dealt with mental health issues and where does music rank among that?

RV: I’ve been writing rhymes since I was 15 years old, so I’ve always used music to express myself. No [it did not reach a breaking point], because growing up through hard times put me into a position to write about how I feel, even if it wasn’t a specific situation that I wasn’t going through. Sometimes I might be in a mood, where I might be depressed, I feel that writing helps deal with day to day situations. Other than writing rhymes, I do recreational boxing workouts that I’ve been doing for years.

TK: Philly seems to enjoying a renaissance of genres crossing over with many rappers appearing alongside punk and hardcore and indie rock bands on bills. Do you view Ronnie Vega as a part of this movement? What was it like being a black kid from Philly listening to punk and wanting to embed those sounds into your music projects?

RV: My mother made me and my brothers and sister think past our neighborhood as a kid. Even though I was going through a lot of shit I wasn’t supposed to, it made me branch out more creatively in life, even in the punk world. I’ve always had an interest in other music genres, but when I got older I’ve gotten more appreciative with music. When I started rapping to punk and rock elements, I felt like I was on to something. As a kid running the streets, a lot of my peers wasn’t into my music taste, but Nirvana and Black Flag played a major role in me rapping to heavy punk / rock instrumentation.

TK: One of my favorite lines of yours is “I’m not a rapper, I’m a poet who’s a fucking thug”. It seems to speak to the duality that Ronnie Vega represents as well as the perception of talented black men in Philadelphia who, despite their achievements, are still viewed as thugs and potential criminals. Can you talk a little bit about that line and the song “Strange” that it comes from?

RV: Well, rappers nowadays have their own look and sound that I don’t relate to, but when I started recording, I was around thugs and hustlers on my block who had their own stories and they would share it with me on a day to day basis. Even though I came from a fairly good family background, the streets took me in more than anybody has during my growth as an adult. The line came from me being a kid who was heavily into writing and word play, [yet] the corner still gave me murals and tools that I still use in my life.

TK: What’s next for Ronnie Vega, recording and shows?

Ronnie Vega performs Saturday, February 3 at The Fire for the Chrome City festival; more information on the event can be found here.