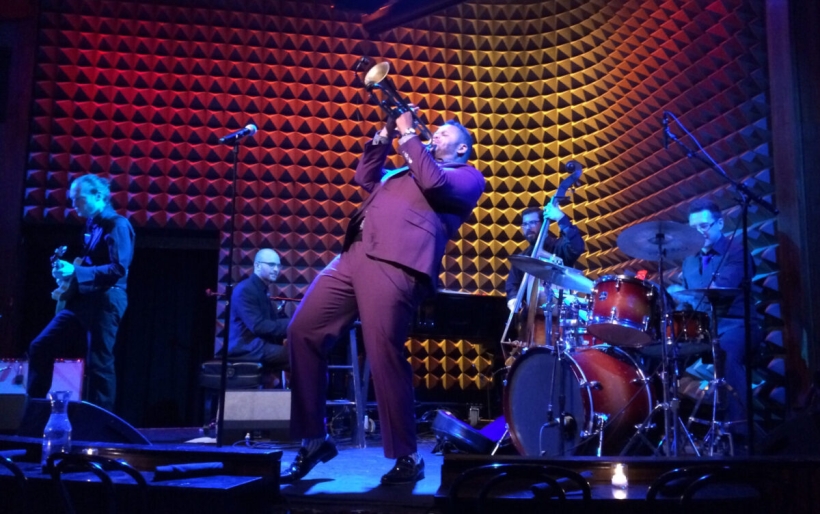 “Roots” is a word that comes up a lot in jazz circles, but it can refer to a pretty wide variety of things: the roots and rich history of the music; personal ties to places, people, or traditions; geographical or familial roots that continue to emerge even as people move from place to place. All of those emerge in this month’s jazz calendar.

Saxophonist Uri Gurvich grew up in Israel as the son of Argentinean immigrants, and he traces those circuitous routes through his music on his latest, Kinship. The albums brings together a globe-spanning quartet featuring members from Argentina, Cuba and Bulgaria to perform compositions that deftly meld folkloric influences into modern jazz. On Friday evening at the Art Museum, Gurvich will perform in a duo setting with the pianist from the album, Leo Genovese – Argentinean-born but best known through his work with bassist/vocalist Esperanza Spalding. [INFO]

A member of Wynton Marsalis’ inaugural Jazz Studies at Juilliard class, trumpeter Jumaane Smith absorbed not only musical lessons from his renowned mentor, but carries on Marsalis’ spirit of educating through performance. Also on Friday, over at the Barnes Foundation, he’ll present “Louis, Louis, Louis,” a celebration of three like-named pioneers: Louis Prima, Louis Jordan, and, naturally, Louis Armstrong. As distinctive as those three innovators were, they all shared a gift for engaging audiences that co-existed with their incredible virtuosity. Smith has followed in their footsteps, whether playing on American Idol or touring the world with Michael Bublé. [INFO]

Guitar great Stanley Jordan is best known for breaking with the past, though not in the audience-alienating fashion that usually implies. Jordan’s music, especially when he burst onto the scene in the 1980s, was audience-friendly while his two-hand tapping technique was not only innovative but showed off his crowd-pleasing virtuosity. On Feb. 11 he’ll play at South, a rare opportunity to hear his unparalleled style in such an intimate space. [TIX / INFO]

While the Manhattan club currently known as Birdland only dates back to 1986, the venue claims a much longer heritage dating back to the famed original, opened by its namesake, Charlie Parker, back in 1949. However you want to date its beginnings, the club has hosted the Birdland All-Stars big band every Friday night for the last decade. It’s rare for the ensemble to hit the road, but they’ll arrive at the Annenberg Center on Feb. 17 with drummer Tommy Igoe, a studio veteran who also created the drum book for Broadway’s “Lion King,” leading the charge. Fittingly for its home just a few blocks from Times Square, the All-Stars split their repertoire between jazz classics and crowd-pleasing arrangements of tunes by David Bowie and Steely Dan. [TIX / INFO]

Drummer Ari Hoenig’s weekend-long stint at Chris’ Jazz Café on Feb. 23-24 will be a homecoming in a couple of ways. First of all, Hoenig grew up in Philly and enjoyed some of his earliest on-stage experiences on the stage at Chris’, so his appearances there always feel like a bit of a reunion. But this time around he’s reuniting his trio with pianist Jean-Michel Pilc and Francois Moutin for the occasion. Hoenig has led a number of bands over the years, but this one’s always been special. [TIX / INFO]

Legendary drummer Sunny Murray was best known for innovating an approach to rhythm untethered to time-keeping, essential to the nascent free jazz scene of the 1970s and key to his work with pioneers like Cecil Taylor and Albert Ayler. Murray had deep ties to Philadelphia and to Philadelphians, spending some of his formative years in the city and maintaining lifelong collaborations with several fellow artists with roots here. Those included saxophonist Odean Pope, pianist Dave Burrell, bassist Henry Grimes and percussionist Kevin Diehl, who will form a special quartet as part of a memorial concert for Murray, who passed away in December. The show, which will take place Feb. 24 at the Clef Club, will also include performances by the likes of Elliott Levin, Bobby Zankel, Jamaaladeen Tacuma and Monette Sudler, as well as spoken tributes by Khan Jamal and the drummer’s brother, Connie Murray. [TIX / INFO]