Musical Collage: Little Strike soaks up influence in the sounds of her surroundings - WXPN 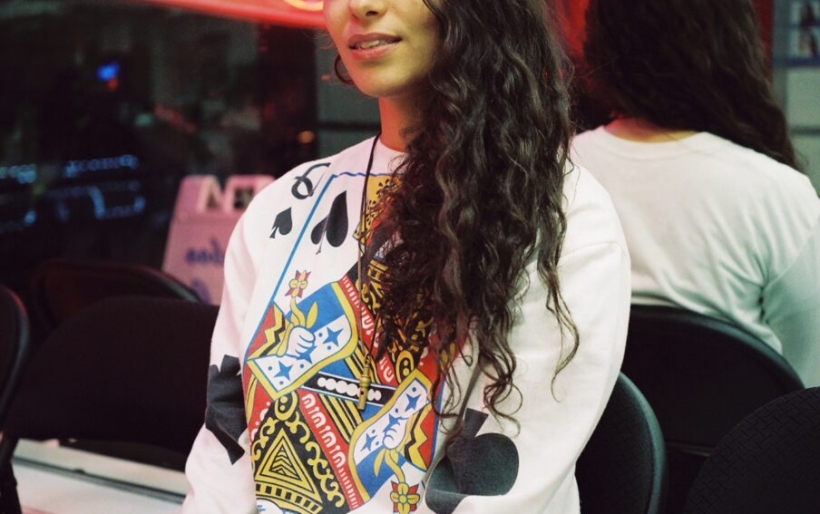 Musical Collage: Little Strike soaks up influence in the sounds of her surroundings

When you’re first presented with the idea of electronic world folk music, it may be an odd concept to wrap your head around. But once you hear the music of Middle Eastern born, Philly-based singer and songwriter Little Strike, the genre makes a lot more sense.

Tamar Dart, the force behind Little Strike, has been popping up on concert bills over the past few years – last year included a performance Pub Webb and a set at Apiary Magazine Issue 9 launch party. Her sound mixes charming, unhurried guitar melodies, beats made from found sounds, and cutting, introspective lyrics that relate to themes of travel, and world strife.

“I sort of approach that (music) kind of how I approach my visual art – it is a collage,” said Dart. “The collage will change depending on what’s around.” Dart got her start with music at the age of 12 while playing the oboe for a music conservatory in Israel. Learning this instrument proved to very difficult, although Dart was able to walk away with a solid understand of music theory and practice, which in turn led her to the guitar. Dart played the guitar until moving to the United States. She picked it up again after taking a trip to Hong Kong, where for a small moment in time, in a “bizarrely traumatic” experience, a guitar was her main companion.

“I lived in China for a year, and while I was there I had gotten super sick – I couldn’t eat or drink water or anything,” said Dart. “The only thing that I had with me was this guitar that my friend let me borrow. I just played and played it in bed sick with a fever – that reinstated my love for it and I’ve been playing it a ton ever since.”

Dart developed her current style of music, that incorporates a beat machine, after witnessing other art and music students in college use this technology and “found sounds” to express their creative sides.

“They would use a lot of found sounds that were really interesting to me,” said Dart. “A lot of my beats are just horses or dogs or car alarms – It is a lot of weird stuff in there. In the newer stuff, if you really listen to it you will hear it – there are ambient sounds, kids playing and stuff like that.”

Currently, Dart is working on finishing up an EP that is due out in the first half of 2018. On previous projects, like Forever Always Leaving, the multidisciplinary musician created content that was very vulnerable and included antidotes of personal experiences and growth. On this new project, Dart is making an effort to remind listeners the importance, as well as benefits, of being a part of a collective.

“It is more of a feeling of trying not to forget that you are part of a group and that the individual force is weak relative to everything else,” said Dart.

As previously mentioned, Dart has often incorporated the theme of the geographic movement of people into her artistry. Although this topic won’t be covered as much in her new project compared to older EPs, the theme is one that she carries with her daily.

“It is something that is creeping into the content that I write,” said Dart. “It is forever in our social climate because there is war and famine. I am always thinking about it – my family came from things like this and right now Israel is so contested, and it is sort of recreating the evils that I had experienced – it is very sad to me. But I feel like it is a big part of my past and where I am right now in the present.”

Much of Dart’s professional music career has taken place in Philly, and she expresses extreme gratitude and appreciation for the support that she has experienced here. Yet, despite the City of Brotherly Love being quite welcoming to Dart, she has also experienced challenges related to her being a woman in the music industry – an issue that is seen both within and outside of Philadelphia.

Many of her first bills included mostly lineups with white male indie bands and her being the only woman.

“That led to a lot of frustrating experiences to where I would show up to sound check and people would be like ‘oh whose girlfriend are you’,” said Dart. “Me being a semi-trickster person, I wouldn’t necessarily say who I was because, I don’t have to – I don’t have to prove myself to people all the time. Then I get on stage and they’re kind of confused.”

Although Dart enjoys performing, she feels like the experience has the potential to be a bit of a “spectacle” with a raised sage and a bunch of lights. She believes that art should be shared on a more personal level where all parties involved can sing and dance together. Dart’s naturally kind and thoughtful spirit and affinity for unity can sometimes causes her to struggle with finding the purpose of being a musician.

“Music feels futile sometimes,” said Dart. “Like when I am in my room and doing my thing, why am I trying to become a better guitar player. Is that useful to the world?”

In order to offset this feeling and to make a larger impact on the world around her, Dart has started Pineapple Monday – an Instagram series dedicated to enlightening her followers on a host of topics, ranging from the history of Haiti, to the participation of Indigenous Americans who fought in WWI, to the Berlin Conference where European nations sat down to discuss how they would divvy up the continent of Africa.

“It is both inconsequential and monumental to me,” said Dart. “It is probably the most important thing I do. It is just a post that I make every Monday that is about some fact in history or in current life that I discovered that I think is inspirational.”