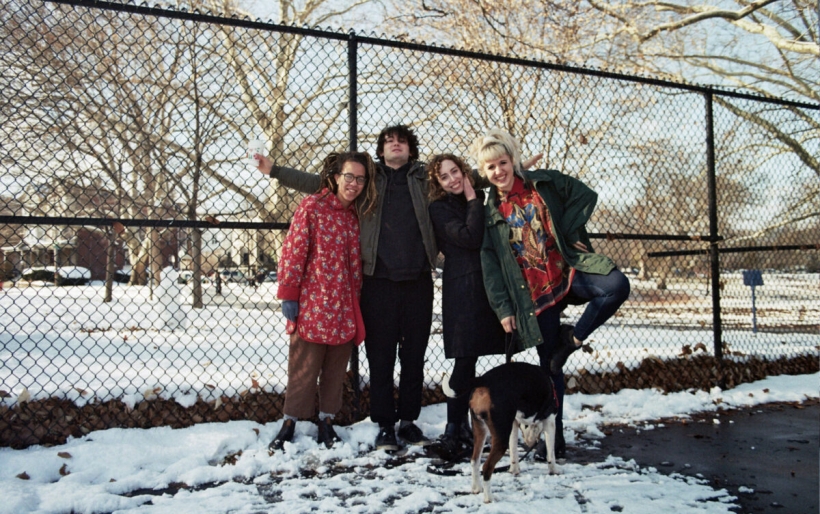 Corey Flood | photo by Emily Lyon | courtesy of the artist

Few things ever go according to plan, as the members of West Philly four-piece Corey Flood know all too well. Less than a year ago, their band emerged from a series of fortuitous course corrections: The spin-off of a Ween cover band switched up its lineup and started writing dark pop originals. Soon after, their hasty first stab at recording demos earned them a deal with Fire Talk and became their debut EP, Wish You Hadn’t. That EP, due out on February 23, comprises four songs that feel equal parts sinister and vulnerable. In them, frontwoman Ivy Gray-Klein is haunted and hushed, singing as a survivor of emotional warfare.

On a recent Saturday, the members of Corey Flood — Gray-Klein on bass and vocals, Em Boltz on guitar and vocals, Noah Jacobson-Carroll on guitar, and Juliette Rando on drums — met me for coffee on their way to practice at Planet Phitness, the performance space that Juliette runs in the house she and Noah share. They’ll be hosting their EP release show there tomorrow night , with support from Empath, Eight, and Preen.

The Key: Tell me about the band name. Corey Flood is a character in the 1989 movie Say Anything, who writes tons of songs about her ex-boyfriend. How do you relate to her?

Ivy Gray-Klein: I don’t really like Say Anything, I’ll just put that out there, but I really like the character Corey Flood. It’s easy to write her off as a one-dimensional trope of a moody teen girl, but I think she’s more nuanced than that. Yes, her songs can make you wince, but she’s so earnest and so real in her emotional journey that I think as a viewer you can’t help but empathize with her. Women are socialized to prioritize making other people feel comfortable or cared for and she totally breaks from that. I also appreciate that her story arc doesn’t conclude with her getting back together with this garbage boy or finding a new person to date. She just focuses more on her own creative output and embracing her platonic friendships. I think that’s a valuable lesson for any age.

TK: Your lineup came together through a series of happy accidents. What’s the story there?

IGK: Juliette and I had been in this Ween cover band. We thought it would be really fun to keep playing with the other two people in the band. We were writing originals-it wasn’t like, Ween Part II. And then, a month before our first show, the other two decided they were actually too busy to be in the band. But we still really wanted to do it, and we asked Noah to play with us. We had a fourth person on guitar, but right before our first show, they had to be out of town. That’s where Em came in.

Em Boltz: I started playing with them three days before the show.

IGK: And I had never sung in public before, until that show.

TK: How was that? Were you nervous?

IGK: Yeah-it was the night before my birthday, and my whole thing about being 25 was wanting to spend a year doing things that I was afraid of. And singing was one of them. So I was like, ‘I’m just gonna do the show and prove to myself that I can do it. And then it’ll be over.’ But it’s continued.

TK: Did you lay out plans to record soon after your first show?

IGK: Our first show was in August…

EB: …and we recorded in September.

IGK: It was pretty amazing that we recorded it all in a day. We didn’t really have experience with recording.

Juliette Rando: At the time, we all thought we were just making demos to put on Bandcamp. I didn’t even use a metronome!

IGK: We just needed to have something quick to put online, just so-

Noah Jacobson-Carroll: -so we could get booked, so people know what we sound like.

IGK: Exactly. And then they ended up sounding a lot better than we thought!

TK: You’ve cultivated a pretty gloomy aesthetic with this EP. You describe yourselves as “very goth” and have written a lot of dark, sensory details into your lyrics. If you were making a mood board for the EP, what would it include?

JR: Some sharks. I think of us as like…spooky surf music.

EB: It kind of reminds me of shows I liked a lot in high school, like My So-Called Life, and Daria. The music just has that essence in a way, of being kind of brooding and teenage-y. That’s not a jab at us!

NJC: I actually didn’t know we were a goth band, until you just said that.

IGK: Well, I think everything has an undercurrent of being sort of tongue-in-cheek. We don’t take ourselves too seriously. We’re not a Marilyn Manson band. Corey Flood | photo by Emily Lyon | courtesy of the artist

TK: How do you want people to feel when they listen to your music? The sound is a kind of menacing, but I think the lyrics are more vulnerable. It feels a little bit split.

JR: I really appreciate Ivy’s lyrics, because she has this perspective that I don’t find in a lot in other music. She’s really talking about vulnerabilities, and violations of boundaries, and kind of moving through a world where people are hurting you. I relate to that experience in a lot of ways, and I think maybe that speaks to other people too.

TK: How do you feel like you fit into the Philly DIY community? There are so many bands in that scene. Do you find that it’s a really encouraging place to start a new project, because there’s already a captive audience, or do you feel like you have to fight to stand out?

EB: There are a lot of different scenes happening. The other band I’m in [Sieve] plays shows in a scene that’s kind of different, and I feel like, because there are so many different kinds of music happening, there’s a lot of room for everyone to create their own circle of people that they can just make stuff with. And then people start inviting friends, and then their friends invite their friends, and suddenly there are all these people.

JR: I think it’s a pretty generally supportive and cooperative community, from our experience.

NJC: I also think us being centered around Planet Phitness, which we try to make a conscious space, helps.

JR: Planet Phitness is where Noah and I live. It’s just a basement, but we try to be intentional in the kind of bills that we host, and we try to be really welcoming and supportive. Every time a person walks through the front door, I make a conscious effort to make eye contact, smile, and welcome them into the space. I remember when I first started going to house shows in Philly, I would feel immediately uncomfortable and out of place if the person doing door didn’t acknowledge me. I never want anyone to feel uncomfortable in our house, so I greet everyone personally to make sure they know they are welcome and that I am glad they are here.

NJC: I live at Planet Phitness but Juliette pretty much runs it herself. We do have a lot of conversations about how to make it a more intentional, inclusive space, though. We’ve been to enough shows to know what we like and what we really don’t like about certain venues, and we don’t want ours to resemble the large majority of them, which often replicate the dynamics of toxic white/cis/male bro-dominated music scenes. Our idea of success is to help support a community of artists that don’t have nearly as many places to play in Philly and also to provide a space for people that want to see something other than four-white-dude bands when they go out.

TK: You’ve cited Helium and Liz Phair as influences. What are some other things-musical or non-musical-that shaped Wish You Hadn’t?

IGK: Right before we recorded, I was reading Jenn Pelly’s book on The Raincoats, and that felt really timely and relevant. So much of it is about how striving for perfectionism is inherently boring and incredibly limiting. I think freeing ourselves to be like, ‘We don’t have to follow any preordained rules,’ allows us to be more comfortable in experimenting with different things.

NJC: Yeah, we don’t all listen to the same bands or anything-it’s not like we were coming together because we all had the same vision for a band. We just wanted to play music together.

Corey Flood performs at Planet Phitness on Friday, February 23. More information on the gig can be found at its Facebook event page.