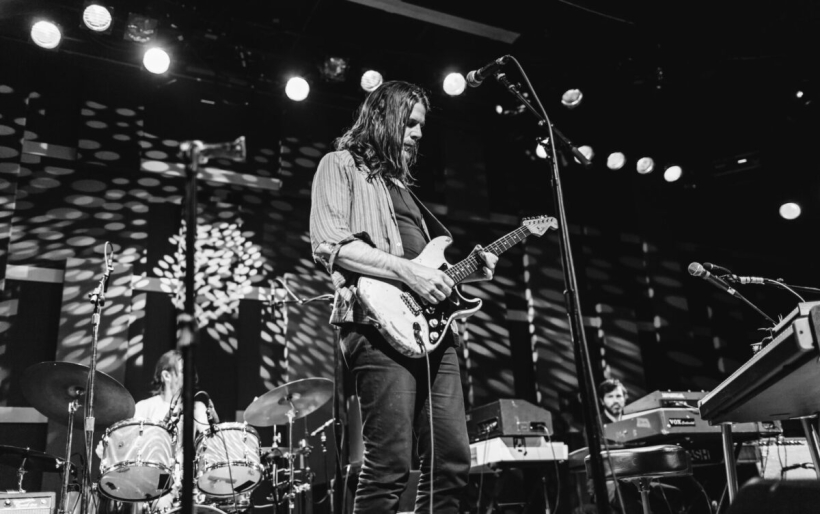 Eclectic singer-songwriter and producer Jonathan Wilson‘s new album Rare Birds is an ambitious undertaking. At 13 tracks strong, many of which lie in the six- to eight-minute range, it was impossible for Wilson to bring all of his new tunes to the World Cafe Live stage for Free at Noon this afternoon, but with the way Wilson and his band filled the room with their soaring sound, you almost wouldn’t have known that what we heard today was only a small sampling of the musician’s catalogue.

The Los Angeles-based Wilson is as much a multi-tasker as he is a multi-instrumentalist. He currently plays guitar in Roger Waters’ touring band, spent much of last year producing Father John Misty’s latest album Pure Comedy, and has worked as a producer for acts like Dawes, Karen Elson, Conor Oberst and Roy Harper. In addition to counting legends like David Crosby and Graham Nash among his personal friends, Wilson enlisted high-profile artists like Lana Del Rey, Josh Tillman, and Lucius to contribute backing vocals to Rare Birds, his third solo album.

With all that name-dropping going on, it might come as a surprise how down-to-earth Wilson seems. Though he’s not much of a conversationalist onstage, his chill and laid-back hippie attitude make his audiences feel like they’re all hanging out together, sharing the good vibes.

Today’s set kicked off with the steadily groovy “Trafalgar Square,” setting the mood for the rest of the high-energy selection of tunes that Wilson and band powered through. Rare Birds lead single “Over the Midnight,” an epic eight-minute anthem full of catchy twists and turns and poignant lyrical commentary, was a highlight. “This world it is burning, but don’t it feel incredible? Whisper in my ear and tell me what you see in the flames,” Wilson sings on the track, which sounded all the more powerful in front of an eager crowd.

Another standout included a Rare Birds track that Wilson introduced as “named after a famous road in California” (“Sunset Blvd”) — a song just as long and winding as its title suggests. Brian Eno collaborator and new wave composer Laraaji joined Wilson and band onstage for “Loving You,” providing backing vocals while playing his signature instrument, the zither. Wilson and crew closed the set with Rare Birds‘ title track, an upbeat tune with a sunny outlook that captures Wilson’s blissed-out, timeless sound to the fullest.

Jonathan Wilson plays a sold-out show at Boot & Saddle tonight, March 9, with Laraaji. Check out photos and audio from Wilson’s set below. 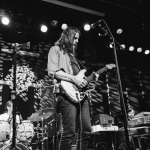