Navigating Sound: Kilamanzego on the journey from hardcore punk to experimental beatmaking - WXPN | Vinyl At Heart 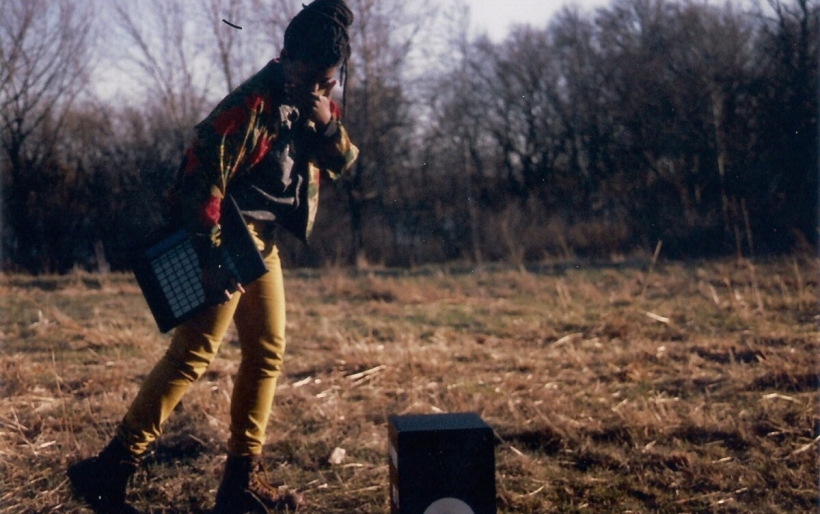 Kilamanzego | photo by Manny Arocho | courtesy of the artist

Navigating Sound: Kilamanzego on the journey from hardcore punk to experimental beatmaking

From the opening notes on “Picking My Kalimba from a Distance” with its bright, high-pitched samples and tribal stutter-step, the listener can tell that they’re not just in the presence of a beat-maker: they’re witnessing magic by Philly’s Kilamanzego.

Imagine a dusty warehouse in West Philadelphia, stocked to the brim with old, rusting pianos, pitbulls with mange and orange bandanas, and a whole lotta white people wearing black clothes and rocking dreadlocks. This was the scene when I first heard Kilamanzego cast auditory spells, lifting the crowd with euphoric organ swells only to pummel them with roaring bass drop after bass drop. That night, Kilamanzego — armed with Ableton Live triggered from a laptop and an infectious energy — wasn’t just playing a beat set; they were opening portals to realms from which I don’t think I’ve ever returned. And yeah, yeah, yeah, I know what you’re saying: that sounds like a lot of music guy talk, and the big lofty words volleyed about to describe what’s being thrown down don’t impress you. The thing is, while that performance might have been a welcome surprise — that so much powerful, trance inducing sound could be conjured by a petit yet tough former hardcore punk, black girl in a west Philly punk rock basement — Kilamanzego’s next performance I witnessed? It was a revelation. There is no doubt that we are dealing with one of Philly’s most creative musical minds.

And for Kila, it’s a long time coming. Kilamanzego has created a tightly wound catalog of entrancing beats, mini-séances that invoke both their time spent toiling in Philly’s underground and their Ghanaian roots. At once tribal and atmospheric, Kilamanzego has etched new sounds on the beat-based landscape. With their series backyardbxss that they curate as part of the smth savant collective, they’ve helped cultivate a movement that bridges scenes and communities in the spirit of Hip Hop. For Kilamanzego though, that spirit doesn’t seem to want to be tamed. With a hypnotic new single called “Stay Floated In The Tribe” out this week and upcoming shows including Get Better Fest at the First Unitarian Church, we sat down with Kila to discuss beats, life, and sonic ritual texture.

The Key: You’ve been involved in the underground music community for a while; what were those early days like of trying to form bands and play traditional punk rock music?

Kilamanzego: It’s kinda funny, my earliest memories of being in a band are from middle school: a seven-member ska band, eSKApade (we thought we were so clever with that) and a Christian death metal band. Its name was also a “clever” pun, but I won’t say it haha. Then there was this punk band called Majority Out. We broke up when the drummer got a crush on our guitarist and that spring fever lasted for like two weeks, because you know…high school.

My last round of bands were hardcore. I always considered myself more of a hardcore person than punk rock, mostly because when I first heard East Coast style, it reminded me of hip hop and that was the scene I was used to pre-any rock stuff. All of the bands would end fairly quickly because members would either be flaky, not serious, or fickle. It was also difficult trying to get a bunch of people together at the same time, especially with that ska band. I’m still not sure how we did it.

Most of the bands I was in I played bass. Only in the past 10 years did I make a switch to guitar. The last song I memorized on bass was Watchtower’s “Control and Resistance” which was kind of a benchmark for myself to be like “OK, once I get this down, I can consider myself a great bassist and move on to the next instrument.” That track is sorta comical, but it also represented taking 16 year old bass player me very seriously. It took around ten tries to get it and when I did I was over the moon.

They say as you get older, you start to overthink instead of letting the creative ideas flow. I can remember playing wacky bass lines when I was little and today feeling like “WTF was that? Where did I get that from?” I was pretty doubtful making electronic music later in life, but I think all those early musical experiences in punk, ska, hip hop, etc that I had never left. I owe all of my musical inclinations to my father. He’s not a musician at all, but he got me started on violin in elementary school, trombone, piano, etc. But I never finished piano lessons and I regret that to this day, haha. Kilamanzego | photo courtesy of the artist

TK: How do you think that prepared you for the transition to focusing on beats? Do you think often marginalized people involved in hardcore, punk or indie rock gravitate to electronic music because there’s a more accepting community? Or does the isolation of being ‘other’ lead to the isolation of making beats? Or is there something else?

K: I think having a background in playing real instruments helped, and definitely having been in bands. My brain was always fixated on melodies over lyricism, so it felt natural that I was into stringing sounds together. I was also a sneaky lil’ jerk. I would go to my older brother’s room and listen to his records, everything from Lost Boyz to Arrested Development. To get super cliche, I actually discovered J Dilla when I met you, Alex, and instantly fell in love with Dilla’s beats. It was the year DONUTS was gonna drop. Without question I remember going straight to the Stones Throw site and buying an “RIP Dilla” shirt. I wore that thing everyday ‘til it got holes and bleach stains on it. RIP to Dilla and that shirt.

As far as the rock music scenes go, I can’t really speak on others’ experiences but I can speak for myself. I’ve always had a go-getter attitude in every band I’ve been in. Even when those high school bands broke up because no one took it seriously, I took it hard, probably a lot harder than I should’ve. Producing beats made me be accountable to myself, and only myself. The hardcore, punk scenes can be very marginalizing because no one practices what they preach. It’s always “Rah rah rah, I’m here for the unity”, “rah rah rah women to the front, fuck sexism, racism, homophobia, transphobia…” but no one applies that in their daily lives. No one actually speaks up or out against things, even in conversations with their friends because they’re afraid of getting….well, ha ha, marginalized. Interesting paradox.

It wears on you and you get tired of the broken record syndrome. I don’t believe the hardcore, punk, indie scenes owe me a thing, but if you put your lyrics forward to claim and back certain ideologies and expect to get paid for that? Especially when your main audience is young, impressionable minds? Stick to your guns, yo! Regardless, those styles of music will always be in my heart.

TK: While Kilamanzego seems to sound organic, it’s also clearly electronic music. Is there a certain purity of resonance that comes from making beats with programs and synths that can’t be captured with a live band despite the technological origins of the music? How has technology influenced or empowered you as a producer?

K: I definitely think you can feel more connected to your music and have the audience experience it with you better when you articulate it using real instruments. I’m into software because it feels like a video game to me and I like navigating my sound in that way. At the same time, nothing can really replace a live band. There’s a roomful of emotions and energies feeding off of each other that can really enhance everyone’s relationship to the music. At the same time, technology stresses me out sometimes. I’ll be on my computer for hours on end — not just making music, but finishing other tasks, watching Neflix etc, and in the end you might feel like a drained zombie.

Working on music with a computer for long periods of time takes a lot of fucking toughness. So in that sense, I’d say that tech has influenced me as a producer in realizing that I wanna translate what I make from it into using organic stuff. I plan on adding real instruments to my live arsenal in the near future. But tech has probably empowered me most by giving me other ways to network with random artists that I’m enamored with at a rapid rate. I have a really dope jam with a Swedish-Togolese-Mozambican producer named Tusabe coming out in the near future.

TK: Your music has a lot of sonic texture; there will be chattering voices and bustling city sounds followed by dense organ and synth washes. What techniques do you employ to create that atmosphere? Do you think trap music or any other modern beat-based music lacks textural diversity? Why or why not?

K: With sonic textures, I pretty much apply what I’m visualizing in my head due to what I’m feeling in the moment or which direction I’m already going in with the track. Dark brooding bass? Ok, that reminds me of a lion’s roar. But instead of finding a lion sample, how about I make one that sounds like something in that vein but not exactly like that. I’ll stretch sounds to an unrecognizable state, record stuff using a hand-held device, pitch things up and down, or I’ll mangle it with some effects processing. I never apply just one technique every time. My favorite synths are usually arpeggios or something very melodic and bright. I still think I need a lot of work understanding synth design but I’ll get there.

What’s being defined as trap music is so broad now that I’m not even sure how to start critiquing it. And I don’t think that’s a bad thing — evolution in music is really beautiful to me. I love experimentation and anyone who goes against the grain, which is all about being fearless. A lot of mainstream trap can be cookie-cutter though, but that’s because there’s a quick formula to getting a quick and easy check. At the same time, I think the average listener tends to minimize the beauty of what seems so simple. “Oh I’m not a fan of that producer, he / she / they are so boring.” And I’m like, wait — listen very closely…did you not just hear that vulture and pin drop sound combined playing in reverse? That’s the hi hat. Genius!” Kilamanzego | photo by Manny Arocho | courtesy of the artist

TK: What’s next for Kilamanzeego, as far as shows, releases, tours, etc? Who would you like to work with, play with, learn from and or produce tracks for?

K: Who’d I like to work with? Wondagurl, Tierra Whack. I’d love to work with JPEG Mafia, that record he just came out with…like, WOW. I haven’t heard anything that refreshing and new in a while. Of course, more of my friends. Produce tracks for: Missy Elliott and Little Simz. Learn from: definitely Kaytranada. I’ve chosen to collab with a visual artist named Jessi Jumanji; her art indescribably speaks to me. I’m also planning on going overseas to play a couple of shows this summer. I won’t speak too much on that yet though ‘til it’s formalized. As far as releases go, I’m pretty content for now with releasing new singles every month, exploring my sound and making new music friends.

Kilamanzego will appear on the lineup of Get Better Fest Five, Saturday May 5th at the First Unitarian Church; more information can be found here.