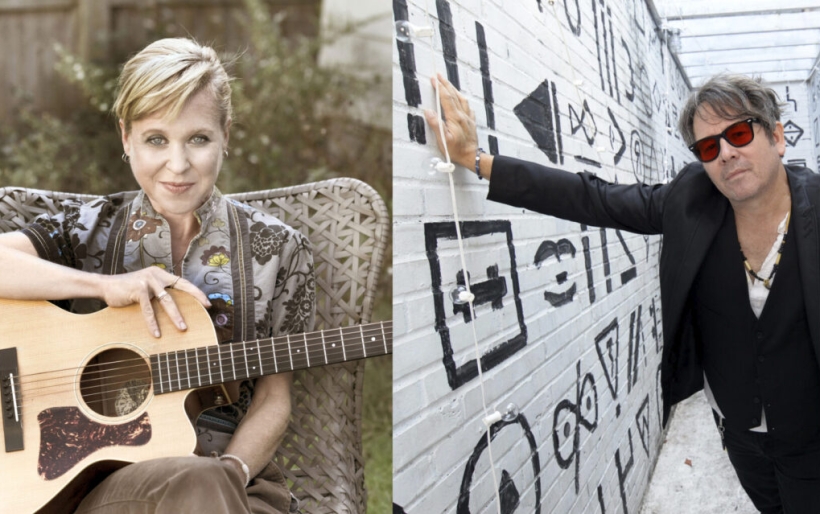 A co-headlining bill with the one-time front persons for Grant Lee Buffalo and Throwing Muses – Grant-Lee Phillips and Kristin Hersh – could be, for lesser artists, a trip backwards and something indicative of our current obsession with the 90s. Yet neither of these moody singing songwriters have ever bothered to wallow or follow. Phillips’ new Widdershins album is exquisitely timed and tuned to our torturous political climate, and Hersh’s most recent album is the delicately poetic Wyatt at the Coyote Palace from 2016. The two old friends hit Boot & Saddle on Wednesday March 14. Before that, however, they played Two to Tango.

The Key: What do you two know of each other or the other’s work and how long have you known that?

Grant-Lee Phillips: I was really drawn in by Kristin’s solo album, Hips and Makers; the one with “Your Ghost,” “Sundrops” – such a mysterious album. We got to know one another on a tour we did with John Doe around 2000.

Kristin Hersh: Grant and I toured together years ago, when I was about 12 months pregnant. He only knows me as a puke-y fat chick.

TK: Have you guy – in your respective previous band past – crossed paths and what was the interaction?

GLP: My first near-encounter with Kristin would have been in St. Louis – winter of ’94. She was sitting alone at the hotel bar and I recognized her. But I couldn’t find the nerve to say hello so it was another six years before we met, toured and became friends.

KH: Grant tells me that he and his band mates saw me and my band mates in a bar once before we knew each other and were too shy to say hello. Which is nuts because not only are we doormat nice but there are no dorkier dorks than Throwing Muses.

TK: You newest songs on Widdershins and Wyatt at the Coyote Palace – how do you feel that it is radically different than the stuff we usually know you from?

GLP: I’m not one to suggest that this album is a wild departure from the way that I go about things. It’s true to my instincts and it shares some commonality with my work over 13 albums. There’s a line that runs through all of my albums though, regardless of when or where they were recorded or what my ambitions were at a given time. Some of my albums are more personal and some, like Widdershins, have more of a social thread. This album is by far the most spontaneous in terms of how urgently it came to be, from writing to realization.

KH: This is a double album with 24 songs on it. I play all the instruments myself – some of which I built. And I layered field recordings over all the songs. These are all reasons NOT to listen to it.

TK: Look at your respective new albums – what song came first in the process of recording: the one that defines the album?

GLP: I seem to recall the first track we recorded as being “Walk in Circles.” Much of the album was recorded in the order that you hear on the album. A few things were swapped around but it’s very close. That song seems like a fitting introduction for the album. It’s me finding a way to laugh at the things that otherwise make my head explode.

KH: The first and last songs – “”Bright” and “Shotgun” – define Wyatt at the Coyote Palace for me. The first because I recorded the kid next door playing trumpet in his barn and it sounded so lonely, the last because the guitar solo never, ever ends.

TK: Does the road get harder or easier – especially considering that NOW this the principle manner in which you earn money?

GLP: The road is where I go to hand-deliver the songs and to connect with those who embrace my music. It’s where I thrive as a performer and continue to grow as a musician, where I find the balance of stimulus and solitude to write. The road is a lot of things. And yes, touring is important, not only in terms of income, but as the primary means of driving awareness. It’s among the many ways that people like myself make a living – but not the only means. Album sales, songwriting, composing, acting, voice work, touring, merchandise, licensing all play a role. My friend Kristin Hersh also writes books. In some ways the road becomes easier. It certainly becomes more familiar. Life is hard for many in this country – in this world. Some jobs can beat the life out of you. I remain grateful that I’m able to concentrate on what I do best and what I love.

KH: The road gets easier because you learn what you need as opposed to what you want.

TK: Will the two of you chat before this show? Is there a plan of attack going into this showcase?

GLP: I doubt we’ll even look at each other.

KH: I do everything Grant tells me to do. Mostly, “C’mon, Kris, be show people.” I’m so not show people, but I’ll do anything for Grant.

TK: How long have you been in the business of music and how do you think that time in has affected what you do, musically and lyrically considering your newest project and this tour…. I mean, does it wear on you?

GLP: I was 14 when I began performing every weekend. 25 when I recorded the first of a few indie albums with my band Shiva Burlesque. I was 29 when Grant Lee Buffalo released Fuzzy. That was ’93. So that’s a big chunk of my life spent following my passion. I’ve done other jobs. None of them gave me drink tickets or humus. Nobody clapped when I tarred their roof. I feel pretty fortunate.

KH: I started my first band when I was 14. I guess it wears on me when I have to face the uglier aspects of the music business but it’s mostly been an honor.

TK: How do you see your audience? Is there a distinct level of interactivity between you and they, or is there a deep, but passive listenership?

GLP: My songs have traveled to places that I’ve yet to see. I’m grateful for that. It’s what you hope for – that your work will be taken in, that the people it’s meant for will somehow find it. That same connection is the foundation of a great live show – a shared experience. It’s never the same on any two nights because the collective energy in the room changes. I love that about performing.

KH: They are friends. Not my friends but the music’s friends. I like the idea of selling music rather than musicians.

GLP: Nerves of anticipation sure, but trepidation…never.

KH: I’m shy, so what I do onstage is focus and connect, but not with showmanship. Musicianship is more necessary when trying to get these pieces across.

TK: What two songs of yours – perhaps, performed in a row – are geared toward having the most impact or biggest punch when played live?

GLP: I’m a firm believer that the best shows defy any kind of strategy. Great things happen when you let them happen. You can set up the conditions, rehearse your set, know your songs, but at certain point you have to go with wherever the moment takes you.

TK: What song are you most curious as to how it will go over in a live setting?

GLP: I prefer not to agonize over these kinds of things. We’re talking about songs, not explosives. I like the whole discovery process, throwing the set-list out the window.

TK: What will you do as soon as your set is done?

GLP: When the show is over, I make a beeline to sell some CDs, exchange sweaty hugs, meet the folks who trekked through the snow, drove for hours to be there. It’s a long night.

Kristin Hersh and Grant-Lee Phillips play Boot and Saddle on Wednesday, March 14th. Tickets and more information on the concert can be found at the XPN Concert Calendar.