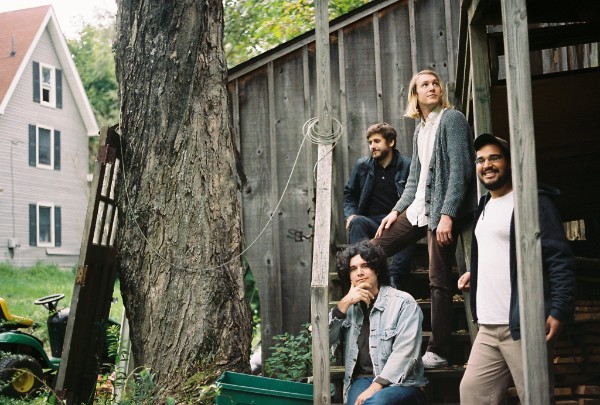 Philly’s own Three Man Cannon have been rocking for so long that by now they sound like they’ve perfected the art of rock, if such a feat is possible. After about 10 years as a band — actually a four-piece, despite their name — Three Man Cannon have just released a new self-titled LP, their third full-length. The new record takes them far from their early days as an anarcho-folk punk high school band that played the basements of Scranton, PA, but their sonic evolution is a welcome one (plus you can still catch them at a Philly basement show from time to time).

Three Man Cannon is, in a way, a new beginning for the band — by self-titling the new release, it’s like the band is setting a new definition for their sound with. According to the band’s Lame-O Records bio, “This is perhaps the first Three Man Cannon record written by honest-to-goodness adults.” But even with a fresh new record, it seems like Three Man Cannon have been looking back on their roots lately — the video for “Feeling Shot” features footage of the band’s first-ever shows, shot on bassist Spenser Colmb’s dad’s camcorder (“We have a MySpace,” you can hear them say).

The wisdom Three Man Cannon has accumulated throughout the years comes through in every aspect of their new songs — and yet they don’t risk making this honest-to-goodness adulthood sound anything like boring ol’ reality. Musically, the band is impeccably polished while still retaining the relaxed and laid-back tone that makes them seem like the most down-to-earth guys out there — just listen to those smooth guitars. Lyrically, they’ve got an insightful, almost poetic grasp on a whole range of emotions through vivid vignettes and speculative daydreams. The record features ensemble vocals and shared writing credits, a testament to how these four people are able to work together so well.

On the upbeat, borderline bluesy lead single “Building Broken Steps,” the band recognizes that no matter what comes their way, life goes on. It’s an anthem of accepting the present and keeping on keeping on: “Let it be your bones. Let it be your home. Get used to it,” sings Matt Schimelfenig over jazzy riffs. The introspective “How a Mouse Could” goes on a metaphorical exploration of the pros and cons of sharing oneself with another: “Still I sit back, relax behind the stove / Think of the things I’d do if you weren’t home / I don’t want to look up to see you.”

“Hopeful Again” is the only title that lets on to just what the song is about — soft and dreamy and full of cascading harmonies, it’s a moment of quiet reflection that sums up the band’s attitude of casting worries away and embracing what life may bring. Hopefully, life brings another 10 years of Three Man Cannon.

Listen to the record in full below. Three Man Cannon celebrate their record release with a show on Sunday, April 15 at Johnny Brenda’s — find tickets and more information on the XPN Concert Calendar.