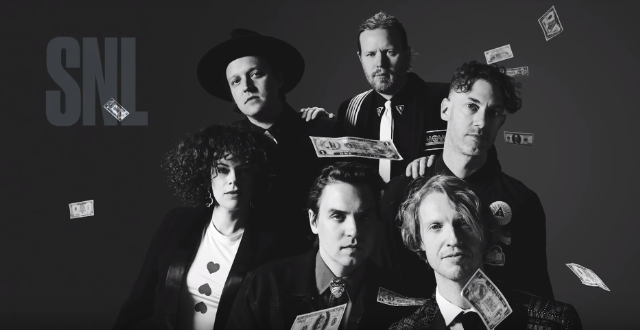 Arcade Fire returned to Saturday Night Live this past weekend. The show marked the band’s fifth performance on SNL, their first appearance dating back to 2007. Appearing on the night, which also saw the return of Bill Hader (along with one of his most beloved characters, Stefan), the band performed two cuts off their 2017 record Everything Now.

First up, the Canadian rockers performed “Creature Comfort,” all while decked out in metallic gold suits. Quite a look. With strobes by the second and smoke shrouding the stage, the band didn’t water down their typical touring live show for the late night appearance.

For the band’s second song, they ditched the gold suits and rolled in Arcade Fire branded slot machines, fit with Everything Now and Infinite Content insignias. Much like the stage presence for their first song, the performance of “Put Your Money on Me” was a whole production that fans of the band have come to expect over the years. Check out both of the band’s performances below.

Arcade Fire bring their Everything Now Continued tour to the Festival Pier this summer. Head to XPN’s Concert Calendar for information and tickets to the show.

The band also appeared in one of the episode’s sketches parodying the CBC, wherein they basically apologize a bunch. Check that out below.