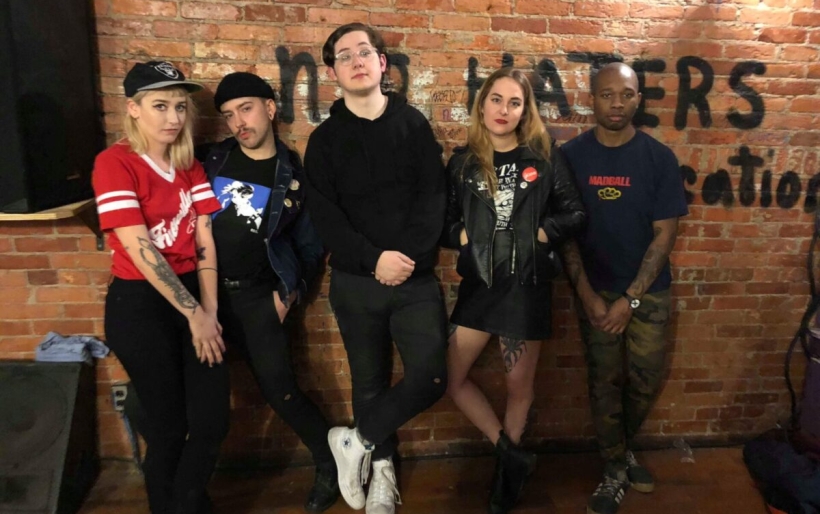 Luxe | photo courtesy of the artist

Fight Fire With Fire: Philly’s Luxe is a force of change for LGBT fans in hardcore punk

Although the image of a winking anime character popping out of a turquoise background adorning their self-titled EP may indicate otherwise, Philly’s Luxe is a kinetic, highwire act of a punk band, all nasally irreverence and brash thrash.

The band dutifully marries an artistic elegance (their Bandcamp is found under “haus of luxe”, a shout to the LGBT vogue houses that undoubtedly inspire them) with the clandestine insurgency of a rogue cabal hopped up on Amebix bootlegs. Still, even with all of their poisonous barbs, coated in guitar shrapnel disguised as noise, poised to do open battle with society’s isms, there hangs above the quintet a veil of mystery.

After seeing them shred at the suddenly hip Danny’s bar in West Philadelphia, I knew I had to take a closer step towards unraveling their secrets. Of particular interest was drummer Joey Ross, who acts as the band’s catalyst, its center. Joey’s presence online and in the South Philadelphia streets the band calls home, articulates a passionate, deep-seeded longing for an equity not often found in hardcore punk. We sat down with the enigmatic percussionist as well as vocalist Justin Hyduk to talk punk, passion and the paranoia that comes with trusting your friends.

The Key: Who are you and what do you do in the band? What identities make up Luxe and do you find what naysayers would label “identity politics” as something important and empowering to the band? How so or why not?

Joey Ross: I’m Joey, I play drums. Justin sings, Kelsey plays bass, and Colin and Ethan both play guitar. There are a lot of different intersecting queer and non binary and other non-male identities in this band — I think most people use “identity politics” as a shorthand way of saying “caring about marginalized people,” and in that regard, that’s definitely something important to us. Everyone in Luxe is part of one or more marginalized groups.

I think what those sort of people fail to realize is that there are real people involved in these conversations. I see it often when, for example, some band does something dumb like use the F slur or say something misogynistic. Immediately people go “oh, no one actually cares [about using gay slurs], you all are just looking for some drama.” People seem to forget it’s not about rhetoric, [speaking out] is about real existing people. Sometimes people act like there aren’t marginalized people in hardcore, and that the reason people get up in arms is because of theoreticals or trying to look woke. It sounds silly to say but, like, we’re all real live people who actually exist. I think people just need to make the connection — that a lot of their own friends just don’t like having their identity disrespected and that’s why they care.

TK: On the song “Force of Change” it seems you’re aggressively going after a handful of ills, particularly homophobia and transphobia. Do you feel that hardcore punk is still a viable option for combating anti-LGBT sentiment? How so or why not?

Justin Hyduk: This song is 100% going after transphobia and homophobia, more or less what I experienced while being a part of the hardcore scene. I don’t think I can sit here and say that [the song] would be fighting it the way it needs to be fought in like a global sense. Within the Philly scene it could hopefully open some eyes. Cause I’ll hear some things and just sit there and really think about it like “wow it’s 2018 and these people still use xyz words, still hold trans people to a shitty standard even though they should all know by now.”

TK: The lyrics like “Outdated mindsets, slipping through the cracks…we will fight fire with fire” on “Force of Change” and “your views have body counts” on “Trans Resistance” seem to be directed at the closed-minded elements of the punk / hardcore community as well as society at large. Was this intentional? Why or why not? How do we navigate a world where even the safe-spaces and progressive communities can seem to be a part of the problem of systemic oppression?

JH: These were 100% intentional and all sparked from friends I used to have that were just complacent with issues that affected people they claimed to care about. These things have bothered me for the longest time and whenever I would talk about them with cishet people I was always “too aggressive” (I literally put “fighting fire with fire” in the song because of how many times they told me I couldn’t) or that I “cared too much”; I cared so much because I’ve had to live through this. My navigation through “safe spaces” that always had something shitty to say had to just be me keeping my chin up and I can’t sit here and say that’s gonna work for everyone because not everyone has a thick skin.

TK: What or who are some bands, artists, movements or activists that inspire LUXE, in and out of punk? Do you find it difficult connecting all these influences within a hardcore punk context, considering punk is an often volatile scene with regards to LGBT issues?

JR: As far as music writing influences, I would say some of our biggest influences as far as the songwriting (for the songs I wrote) are mostly classic NYHC bands — Outburst, Breakdown, Side by Side, and Cro-Mags. The thing I love about Luxe is that all of us like a lot of the same bands, but all of us also draw from different musical backgrounds. Us having discussed covers and thrown out Outburst, Motorhead, Hatebreed, Discharge, and YDI in the same convo as options is a great example of that, haha.

As far as other influences, I can only speak for myself, but much of the help I needed to understand myself, come out of the closet, and be who I wanted to be was due to the influences of people I met in punk. I think for me, the biggest motivation for being in Luxe and even in my own life, is just to show people you can be queer, you can be non-binary, you can like whatever you like and dress however you want, and you don’t have to fit into someone else’s box of what your identity has to be based on one facet of who you are. It’s definitely true that there’s still people in punk who only pay lip service to caring about QTPOC for clout, and are silent or inactive when it counts, or worse, harbor secret prejudices. There’s a lot of this weird vibe where people only use homophobic or transphobic slurs in private amongst friends but would never call you that to your face, so you never know who you’re dealing with.

Luxe plays The Fire on Wednesday, April 4th, with Dead Heat, Primal Rite, Enforced and Pain Strikes. More information on the show can be found at its Facebook event page.