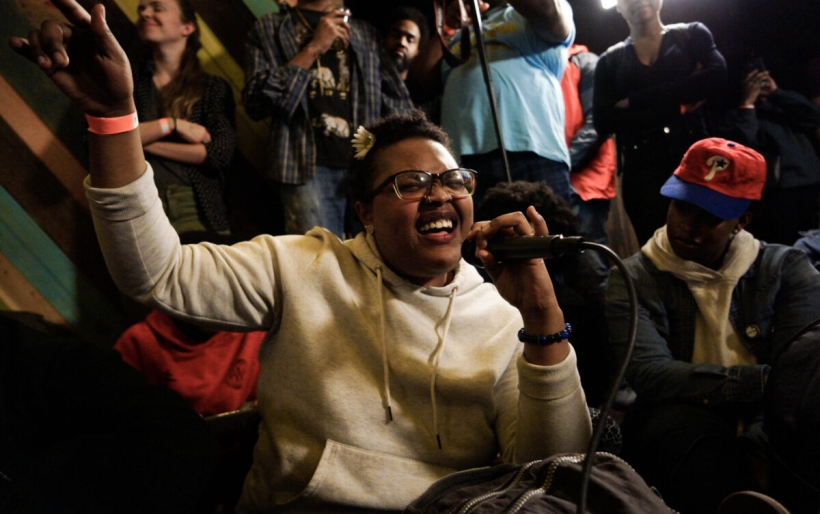 By Hadiyah Weaver
March 22, 2018
11:03 AM
Share
Sinnia Brown performs at the Global Village Jam in Philly | photo by Andrea Hu | courtesy of the artist

The phrase, “It takes a village,” couldn’t be more appropriate when talking about the burgeoning scene at Philadelphia’s Global Village Jam Sessions. Community is the focus, and organizers refer to it as “the only concert where the audience is the headliner.”

Recently, at their event on February 22, at the William Street Commons at 3900 Chestnut Street was packed with singers and musicians who wanted to share their talents inclusively.

“The Village is a big ocean, and you just get caught up in its waves,” says event coordinator, Alyssa Ghilardi. “But they never take you under. You’re just staying afloat on top of them all of the time.” The Global Village jam session has been part of Philadelphia’s music scene for the last year; organizers hope it will reach other cities and countries soon. The atmosphere is electric upon entering the event; individuals are sitting or standing around together to contribute their talents when the microphone reaches them. Yes, the audience are the performers here.

An entertainment and wellness company based in Philadelphia, Global Village was designed to build a community through music and was founded by friends Lyonzo Vargas, Miyekow Acquaah, and Raph Jones.

After an eye-opening visiting experience with his mother to his family’s home country of Honduras, Bronx native Vargas learned how communities survived on resource-sharing. He shared this information with his friends, Acquaah and Jones who are of Dominican and African descent, and they all related.

“Music is what keeps me alive,” Vargas said. “There needed to be a shift; I wanted to create something where people could be themselves, and grow within themselves inside of their community and not feel alone.” The Jam Sessions series began in January of 2017, and has grown from taking place in a small room to now taking place in the University City bar and nightclub, with other jams in the D.C. / Maryland / Virginia area and sights set on London, and New York.

In addition to the free-flowing open mic nature of the event, Global Village also showcases spotlight artists during each jam; February’s event featured Kara Leeann and Seraiah Nicole, the latter of whom has watched Global Village expand from their humble beginnings.

“Thankfully, I’ve been at Global Village [since] it was in small room,” Nicole said. “It was an amazing experience; one of the best experiences I’ve ever had.”

Seraiah Nicole performed her unreleased song, released on Valentine’s Day this year, called “Love.” The 20 year-old is a new artist from Philadelphia, and has a captivating vibe. She’s now working on releasing her first project, and working with her collective, Illadel Sol.

She’s currently unsure of where her music will take her, but is happy to be on the ride.

“The goal is to be successful.” Nicole said. “I just want to share my gifts with the world, and encourage people and share the message that God has put in me. So wherever that leaves me, it’s God’s plan.” Kara Leeann, originally from West Philadelphia, also performed, and she chose to do her single, “Spliffe.” The 25-year old has been a performer since first grade, and has been involved with the Jam Sessions for ten months. She thinks the they have offered opportunities for her and other artists to have a release at the end of a week.

“[I like to say] ride your vibe, and find your tribe.” Leeann said. “I’ve been riding my vibe, and I’ve found my tribe. This is really a great place to be; the people are so welcoming and the artists are always down to work and network with each other.”

Leeann is currently working on her first EP, which she is very excited to release in the next few months. “It’s been a long time coming.” she said.

As far as events go, Global Village wants to continue having their regular Village Jams in Philadelphia, while also expanding to surrounding cities.

“The goal is to start bringing this energy brought to 200 people on average, taking that to New York and the DMV because it’s people outside of those cities that come here.” From there, they plan to bring the global energy into wellness centers. Global Village’s Administrative Assistant, Ashley Byars, says it’s important for companies like Global Village to expand.

“There’s a need for positivity, and unity as well,” she says. “Seeing that [it’s important to] be able to see how music brings everyone together across borders.”

As far as why she’s involved with Global Village, after visiting a session ten months ago; Byars knew she had to become a part of the event, and has loved it ever since.

“You don’t feel you’re working,” said 23-year-old Byars. “You feel like you’re contributing to something the world needs. You’re growing spiritually, [and] you learn from everybody around you.”

For artists interested in being spotlighted by the event, Global Village suggests coming to a session, being active, and entering the waitlist. Or, simply come to learn and hear musicians from all walks of life, and who have all different kinds of talent and different perspectives.