From his time as part of Lower East Side Manhattan’s loft jazz scene through to his major label entrée with Tom Waits and onto his own solo/band list (Rootless Cosmopolitans, Young Philadelphians, Ceramic Dog), guitarist-composer Marc Ribot is the ultimate indie musician and a working class iconoclast/union leader with old world smarts. His newest, most combustible Dog work with Shahzad Ismaily (bass, electronics) and Ches Smith (drums), Y R U Still Here?, also finds Ribot at his most angrily and committedly political – a rant he’s sure to lay out when he plays an Ars Nova Workshop gig this Thursday, March 29 at Johnny Brenda’s.

TK: I remember you at the dawn of the 80s playing on small stages in Manhattan when – semi-all-of-a-sudden – you seemed to leapfrog from being a transplanted Newark youth to always horning in on gigs with John Zorn and Jazz Passengers and Lounge Lizards. How did you make that transition – from nobody to playing all the time?

MR: It certainly wasn’t overnight but a couple of big steps did happen. I was in a group called Brenda & the RealTones which later became the Uptown Horns. We started backing up many different singers which led to more local gigs. Gigging with the Lounge Lizards also was a big deal – I got that playing with Roy Nathanson of Jazz Passengers who also played with the Lizards. He knew John Lurie from 2nd Avenue. John knew that Roy could actually pay jazz and even studied with Nathanson at that time. In 1984 when the Lizards needed a guitarist I was around. Playing on Rain Dogs, however, quickly gave me this higher profile, which lead me to get calls from people who were nationally and nationally known.

TK: We jumped the shark here. How did Waits get to you?

MR: Tom Waits had been living in New York at that moment and he saw me in the Lounge Lizards. He was checking everything out. He was at a Brenda & the RealTones gig too. He just found me phoned me and asked me to play on a couple of tunes on that record. Instead I wound up playing on a bunch.

TK: You just played on the most recent Jazz Passengers album from last year. What’s your relationship with Nathanson?

MR: We stayed friends all this time. I stopped being a regular Jazz Passenger because I couldn’t go on the road with them every time.

TK: You mentioned the national and international acts you played with as a result of what you gave to Waits. Are you comfortable in the knowledge that in most cases you gave them their new sound?

MR: Yeah well… I am… but Tom will come up with something great no matter what he does.

MR: I was happy with playing on his stuff. I don’t know about a grand statement. Tom defined his sound. I’d come up with a bunch of ideas and he would say what he likes. I did what I could.

TK: You play on so many projects. Including your own. Ever afraid of burn out?

MR: No. [laughs] Recording is fun.

(At this point Django – my greyhound-turned-music-critic begins to growl. I explain to Ribot that my dog is named after Django Reinhart and Ribot greets him as such).

TK: You had your own music at the ready around the same time.

MR: I did; several bands that played CBGB’s. I just didn’t get signed to a record deal with then until 1988 or 89 when I was on tour with Elvis Costello or Waits. I got a call from Island about do I want to do a record – but clearly because I was Tom’s side-musician. They hadn’t yet heard what sort of stuff I was writing. I believe they just wanted a Mini-Waits.

TK: Which you clearly weren’t. Where does writing fit in as opposed to playing? Are you writing as much as you practice?

MR: Yes. That’s a funny thing. I never thought of myself as some hotshot mostly-guitarist. But that’s what happened. I always wrote songs. 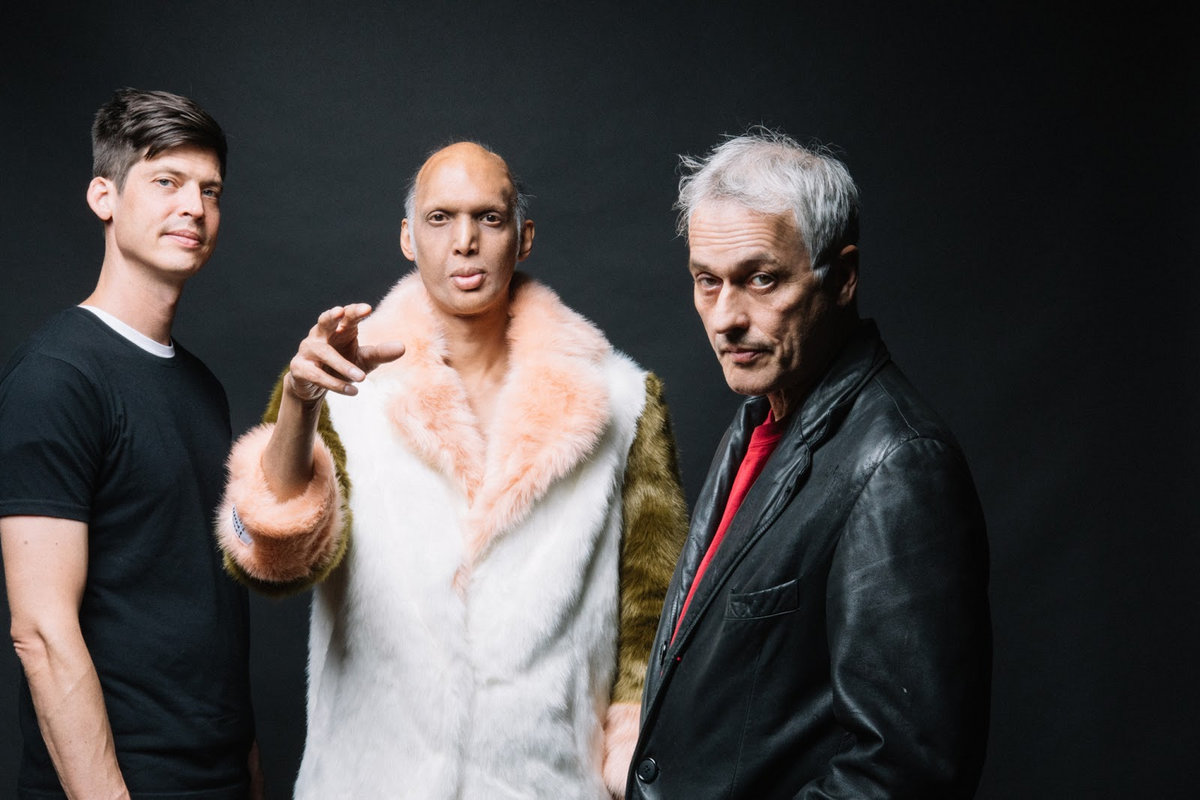 TK: Rootless Cosmopolitans, The Young Philadelphians, Los Cubanos Postizos, Ceramic Dog: other than you fronting each band what is similar about them, unites them?

MR: Probably nothing. [laughs] I have been accused of being a bit too diverse. What can I say? I’m a curious person. It’s a good question. I would say that in a way all of them were punk rock bands by other means. I’ve often wondered the same thing myself.

TK: I’m in Philly. So are your Young Philadelphia collaborators Jamaladeen Tacuma and G. Calvin Weston. How did that all come together with you guys doing Gamble & Huff, etc.?

MR: I can tell you quite upfront that one of the biggest influences on me is Ornette Coleman’s Prime Time. Of course it is Ornette writing and composing and conceptualizing but there’s also Calvin and Jamaladeen playing. As a rhythm section they have amazed me for some time. I don’t remember how I first met them but we have been doing projects and various jams since the 90s. For a minute I even had this harmolodic country band in tribute to Ornette. Yet this band only truly got together when I got off my ass and starting writing out the string parts to all those classic Sound of Philadelphia songs. One of one first gigs was with John Zorn in Europe – no one would ever show up for rehearsals which became our signature – so we’re this completely improvisational band. So Calvin was singing opera and Zorn was swinging the mic as if he was pulling an Iggy Pop trick distorting through the amps. There were maybe 100 people in the audience who I’m sure thought we were wankers. It was only when I created a framework – writing out classic Philly soul song strings – that we had a common language and a solution in which we could play within. Plus Jamaladeen and Calvin knew all these tunes so it didn’t matter if anyone missed rehearsal.

TK: What fancy were you looking for Ceramic Dog to tickle? What did you need it to do?

MR: This will sound heavier than it is but after 9/11, I started my bucket list of things I wanted to do. One of them was that – see how all of my other bands were rock bands by any other name? I wanted to stop making excuses and do a loud rock band. Maybe my idea of what that means doesn’t suit or fit other people’s definitions but so be it. I messed around with different configurations and arrangements before I got to what I got with Shahzad (Ismaily) and Ches (Smith).

TK: Going forward from that meeting and the first album and believing that you do other things in-between are you writing specifically for a Ceramic Dog thing and these guys? Or are you just writing and adapting things and they happen to be right place/right time?

MR: Good question. Usually it is the former BUT even if it was the latter and written something for something else… with Ceramic Dog I have to totally just give it up and have no preconceptions. Just go for it. You can’t teach old dogs new tricks. Just move with the way it sounds. Zorn writes for people in the band. Ellington wrote for people in the band.

TK: Something you said in an interview about trying to hold your political engagements separate from your music. Obviously that is not true on the new Y R U Still Here album and new songs such as “Fuck La Migra” and “Muslim/Jewish Resistance.” Do you remember your flashpoint for the new record’s combustible politicism?

MR: When Trump got elected. I’ll make no bones about that. I have recorded Italian Communist Anthems as instrumentals in the past, as well as “Bread and Roses” – the IWW song – and “Masters of the Interest.” It wasn’t as if my records were devoid of politics. We just happened by by two-thirds finished with the album when we suspended it as we all had other gigs – but after the election it didn’t make sense. I believed that the world had bigger problems than me fighting with my girlfriend although now there does not seem as if there are bigger problems. That’s not because of Trump. That’s because of my girlfriend. I took a hiatus on that and came up with material for an album called Songs for the Resistance which will come out on the ANTI label. We’re trying to figure out during the car ride what the date on that album will be – summer or fall. Later than that, and it’s somebody’s trial and my funeral or vice versa as Willie Dixon said. That ate up a lot of 2017’s energy. But then I got together with Ceramic Dog and finished up its material – as with Songs of Resistance – in November 2017.

MR: I lob this question at playwrights and comedians all the time: what is the greatest challenge of poking fun and criticizing Trump when what he does is already so bizarre? Or even anti-administration material that you might play before pro-administration types. What do you do?

TK: What the greatest challenge is that somebody might shoot us. Nobody has yet. I will be playing “Fuck La Migra” in Nashville and Asheville coming up so we’ll see how that is. If they don’t like it, they can kiss my ass. The greatest challenge though is to not bore me…to not play safe.