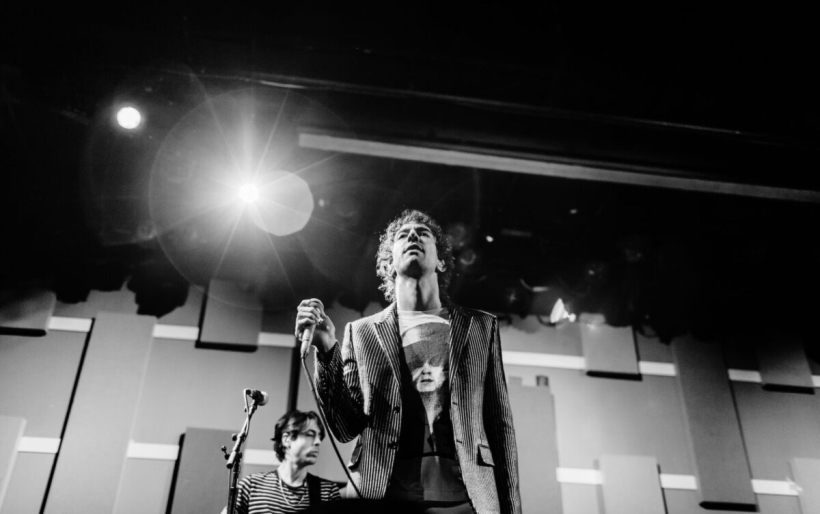 The World Cafe Live disco ball was put to good use this afternoon during a Free at Noon appearance by the one and only Albert Hammond Jr.Even the warming weather couldn’t keep the eager audience away from Hammond’s performance, and it quickly turned into a big ol’ noontime party.

Though he’s best known as the guitarist of the Strokes, Hammond didn’t hold onto his own guitar for too long during today’s set, instead putting it down to roam — and dance — around the stage. Hammond is currently on tour behind his fourth solo album, Francis Trouble, released earlier this month, and shared several dynamic new songs today.

Francis Trouble is an album of contradictions — and that’s how Hammond intended it to be. The subject matter gets pretty personal and serious, tackling Hammond’s emotions surrounding the loss of his stillborn twin brother Francis, but you wouldn’t know it unless you listen closely to the lyrics. On a musical level, and certainly during the band’s live performance, everything is shiny and upbeat, and Hammond himself said in a press release, “What the music says may be serious, but as a medium it should not be questioned, analyzed or taken too seriously.”

That was no problem for today’s audience, who came ready to bounce along to Hammond’s catchy tunes. Hammond powered through the first few songs of his set, including smooth and fast-paced Francis Trouble track “Strangers,” before he remembered that the audio from Free at Noon is broadcast live on XPN. “This is live?” the songwriter asked, looking out at the countless faces in the crowd. “I kinda feel like I’m in a dream.”

Another of the set’s highlights came unexpectedly, when the band’s bassist encountered some technical difficulties. After a long pause and a remark that, “well, nobody likes dead air,” Hammond decided to improvise, and launched into a solo rendition of “St. Justice.” In the meantime, everything was restored to working order onstage and the band then launched into “Far Away Truths,” one of Francis Trouble‘s standout tracks.

Check out photos from today’s performance below. Tickets are still available for Albert Hammond Jr.’s show tonight at the First Unitarian Church with The Marias — head on over to the XPN Concert Calendar for more information. 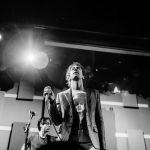