The Road to RFA: Chatting with the Philly rock faves about their newly-released debut LP - WXPN 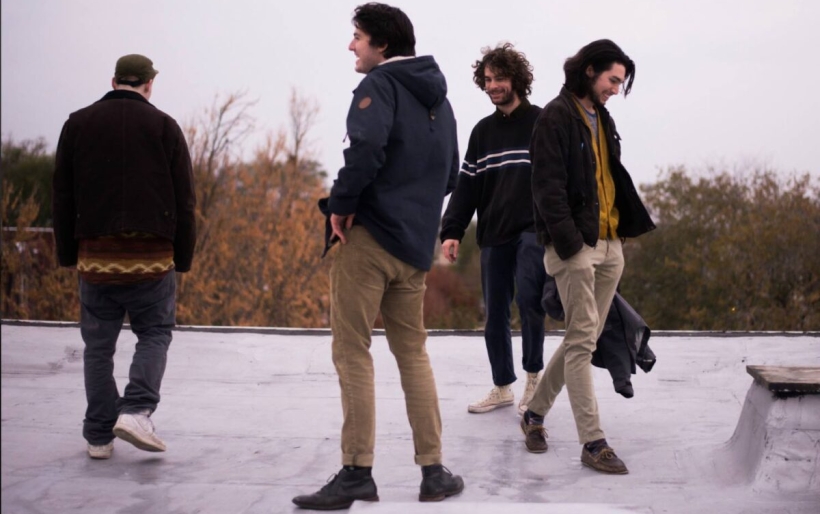 RFA | photo by Olivia Cummings | courtesy of the artist

The Road to RFA: Chatting with the Philly rock faves about their newly-released debut LP

Local rock four-piece RFA hit our radar almost four years ago with an unassuming demo of timeless, asskicking songs. Our writer Katrina Murray compared them to The Strokes and said “their passion and potential is nearly tangible.” Turns out the band was a lot newer to the scene than we thought — they recorded the project as high school seniors — and not only have they stuck around, they’ve grown.

These days, the band tours with regularity, packing the house at hometown venues like PhilaMOCA, and following a well-received succession of EP releases, they just put their debut full length into the world today. The music is upbeat and instantly likable, with catchy hooks and high-energy riffs holding up lyrics about love, life in the city and coming of age as a 20-something in 2018.

Ahead of their album release party tomorrow at PhilaMOCA, we swapped emails with band leader Dan Cousart about RFA’s journey. Read it below while you rock out to the new record.

The Key: It’s been four years since we wrote about your first demo, which was released during your senior year of high school. Are you ever surprised, not just that the band is still going, but that it’s grown like it has?

Dan Cousart: In some ways yes, in some ways no. It’s not really that much of a surprise that we’re still playing together four years later because we’re really good friends and we spend so much time together. I don’t think any of us are really that surprised that we’re still doing what we’re doing because we have been playing together in various forms for years, even before the first demo was recorded. In terms of growth, I think it’s kind of a surprise how much we’ve grown since those early recordings but that’s something that happens with time and experience.

TK: RFA has had the same lineup that entire time. How have you managed to avoid the rotating cast syndrome that often happens in indie rock?

DC: We’ve had the same lineup since we’ve entered college. We had a lineup change when our old bass player Steve left for college in Boston and Brendan joined. In terms of how we’ve been able to stay together, I think it goes back to the fact that we have a personal history. It’s tough to be in a band. It gets very frustrating sometimes and can be overwhelming spending every day of the week and traveling with the same people. I think what keeps us together is the fact that even after a shitty practice we can still sit around and hang out with each other.

TK: The new album is tight, catchy, super fun and kind of timeless. People who go to basement shows around Drexel can dig it, and old heads who were rocking to The Replacements in the 80s can dig it. What’s the process like writing something that connects so broadly?

DC: I think that’s the goal really, to make something timeless. Our favorite bands and artists are the groups that years after first hearing them we can still really enjoy their music. We strive to be like the artists we try to emulate. Writing something that works and feels right with the band can be really tough, but if a song gets past the initial criticism and us practicing it to the ground, then it’ll definitely work for us. I also think that we really don’t fit in to any particular social group and that our music isn’t necessarily tied to any scene or type. We’re not jocks, we’re not punk kids, we’re just kind of us and I think anybody could really connect with what we’re doing if they’re into rock n’ roll.

TK: Aside from it having more songs, in what ways does the album feel different to you from your previous releases?

DC: Having an entire album out this time around is great. We’ve done several EPs in the past, and they’re great for what they are, but as a band I think it’s great that we have a larger number of songs that we’re putting out, and in term, a record that has allowed us to expand a little further than we could before. This album feels different because we’re more mature and I think we’ve made a better recording. I think Todd Mecaughey did a great job of recording the bulk of the album for us, I think Jim Salamone did a great job mastering the songs, I think the songs are better and I think Charlie Dunkel (@chunkel) did a great job with the album art. It just feels a little more legit than our previous efforts on top of the fact that we’re getting better using the studio as a tool and expanding our sound with effects and other instruments like the piano.

TK: Part of the appeal of RFA is the live show, and the energy you all have. How has touring and playing gigs shaped you as a band, and as songwriters?

DC: Playing live is THE thing that has shaped who we are as a band and our aesthetic in my mind. We just want to get better at what we do and to have fun while doing it. Constantly traveling and playing live has shaped the songs into what they are, and I think that people can hear that in the music, that it’s more mature. I’m certainly starting to feel more confident in myself as a writer and the guys are certainly getting better at creating parts and playing their instruments all the time. I think if we keep up what we’re doing, we’re only going to get better.

RFA’s self-titled album is out now, and the band plays PhilaMOCA tomorrow night to celebrate. More information on the show can be found at the XPN Concert Calendar.