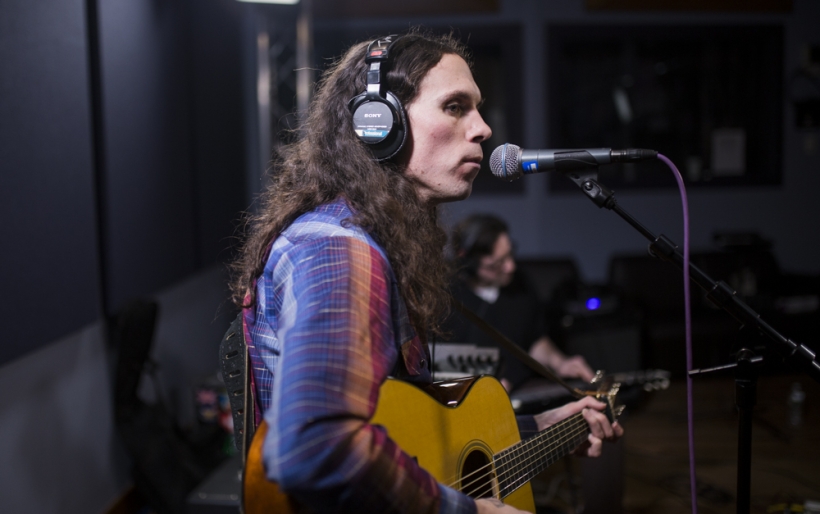 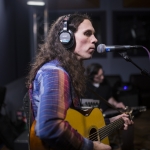 For someone coming from the world of amped-up punk rock,  Roger Harvey‘s music is decidedly low-key and reflective.

The singer-songwriter relocated to Philly from Pittsburgh about three years ago, following stints touring with Against Me!, Dads and The Menzingers. His debut LP, Twelve Houses, was released that October, and it set introspective lyrics to lush acoustic arrangements in the vein of Neutral Milk Hotel and Death Cab for Cutie, with his haunting and tremulous vocal taking center stage.

Almost two years later, Harvey returned with a more outer-directed perspective on the Two Coyotes LP. This time, rather than personal ruminations, he tackles bigger-picture issues; immigration is unpacked in the title track, which tells a story of love across borders, while superconnected isolation is the focus of “Love In The Digital Age.” You can hear anger and frustration, albeit in a subdued manner, on “Gold,” which opens his studio session this week — when he sings “fuck the foundation, we’re in control,” it’s one of the prettiest punk rock moments we’ve captured in the studio.

That songwriting-first focus is a major concern of Harvey, one that he extends to his peers and friends — tonight, he headlines his second Roger Harvey & Family songwriters’ circle at the First Unitarian Church withTom May and Greg Barnett of The Menzingers, Augusta Koch of Cayetana, Anika Pyle of Katie Ellen, as well as Bobby Barnett from Captain, We’re Sinking, Kayleigh Goldsworthy, Jeff Riddle, and Ben Pierce from Restorations.

Singer-guitarist Pierce is also a member of the terrific band that joins Harvey in the studio this week — Dan Zimmerman, also of Restorations, plays bass, while Mike Sneeringer (Strand of Oaks, Purling Hiss) is on drums, Philly royalty Mike “Slo Mo” Brenner is on lap steel — and the group lends Harvey’s songs a windswept, desert rock vibe in a Bright Eyes via Neil Young kind of way.

This week’s session is a collaboration between The Key Studio Sessions and Folkadelphia, and was mixed by James Clark Conner of team Folk. Watch videos of “Love In The Digital Age” and “Two Coyotes” below, listen to the entire studio session streaming via Bandcamp, and get more information on tonight’s show here.