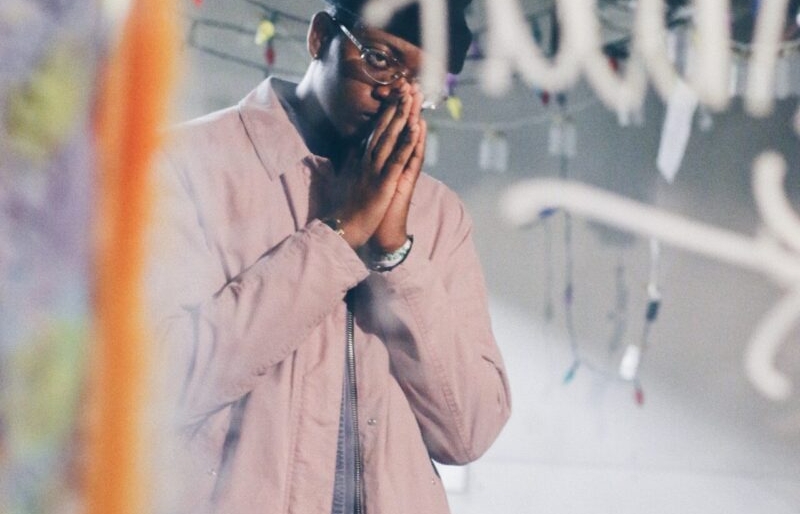 The 24 year old Yeadon crooner Balmour has been singing all his life, from first singing publicly in the church to honing his musical abilities during his time at Shippensburg University.

Since then, the young R&B singer has been quietly making a name for himself in the local scene, performing covers of different genres of music such as songs by Daughters, The Beatles and John Legend. However with his band Emötae‘s recent single “Missing Piece,” and the release of his debut EP Unplugged — which features vocal assistance and production from his brother Dan Goode — Balmour’s name seems to be growing within the past couple of years.

I recently sat down with him to discuss his band, his new EP, and how he feels about the local scene in Philadelphia.

The Key: How did the band Emötae come together?

Balmour: Well, Phil is a guitarist, and his roommate Ray used to cut hair. I used to go over there to get tightened up real fast and I noticed that Phil played guitar, something I was still trying to learn. So one day I called him and he had this little karaoke machine down in his apartment, so we was just singing and he came up with some chords and I think we came up with this song called “I Forgive You” on the spot. That was the first song then we just started having practices me, Phil and my man Prez, who was a part of the band for like four months or whatever.

Actually, we didn’t start as Emötae we started off as 1One the band, it’s like an impromptu name we gave ourselves because we didn’t have a name as a band, we did our first open mic at World Cafe Live. And this is my brother, so naturally I’m like “My brother can sing, might as well come in.” My man Angelo who plays the drums at my church who is one of the hottest drummers I’ve heard, we kind of fused together and we were running as 1One the band for two years. The name changed to Emötae last fall right before we dropped our single “Missing Piece.”

TK: What was the process like  when you guys recorded “Missing Piece?”

B: Tedious, super tedious, because it was our first time in a studio as a group, trying to record a live sound. We had recorded individually before, trying to get all the pieces moving together and getting everybody’s schedule together. It was a good time but we put a lot more work into that single than we probably should have.

TK: What’s the difference between a live recorded session versus a regular one?

B: It’s more feeling when it’s live, but it’s a lot harder when it’s live because it’s timing, a lot of moving pieces with a live sound. Everybody has to get everything right every time for anything to sound good.

TK: Unplugged is an R&B project but tracks like “Almost There” and “Get Loose” we hear you rapping and doing spoken word. When it comes to rap and R&B, what do you think makes these two genres parallel to one another, leading singers like yourself to dabble into their own form of poetry?

B: I think R&B and rap grew up side by side, in my opinion. They’re two genres of music that is still developing to the point where we don’t know where to put people like me who rap and sing. What is our genre? What do you call them? Are they rappers or are they singers? I don’t know, but you just start to realize that in singing, you can use your voice in a number of ways, even Musiq Soulchild back in the days was spittin.

TK: “You Need It” reminds me of when singer Anderson. Paak was on Rap Radar and he said he wants to find clever ways to make women blush and it also makes me think that today’s mainstream R&B has fallen away from that, especially when it adds rap to it where you hear R&B singers trying to be rappers instead of bring rap into their world. Do you think R&B takes away from it’s traditional sound when it adds rap?

B: An OG of mine once broke it down to me like “When you’re talking to a woman you’re not like ‘Yo, wassup, let me take you home!”” You know what I’m saying? It’s some finesse in there, it’s a little bit of tenderness with some smoothness. In making these tracks, especially like “You Need It,” it’s just like a club vibe where y’all sippin something nice, it’s not too loud, you can have a conversation, that’s kind of how that song is. A lot of R&B artists that like to rap turn that switch on and it destroys a whole record and I try to approach it with sly bars and not stay in the singing lane and keep it calm and smooth like a conversation with a woman across the table.

B: There’s so much attention in the world that I don’t think people realize how accessible you are at all times. Back in the day, if you had a feeling about somebody you had to wait until the morning to talk them, now you can just send a text at 2 a.m. based off a temporary feeling when you could’ve waited to see if the feelings were the same. On that same aspect, that’s how people find themselves in trouble because they could be in the same bed with their significant other and find themselves in a situation sending a late night text still on a temporary feeling and ruin an entire relationship just off some my-phone-is-there-and-I-know-she-goin-pick-up.

But trying to escape the deepness of it, that whole song resulted because I have a three year old daughter, and her iPad is literally connected to her at all times and I try to take it from her once and she had a fit. She’s so hooked to this thing she’s grown up with technology, we weren’t like that. People are way to attached to technology, period, people need a phone call twice a day, text all day. Like, that doesn’t make any room for growth. There’s no missing people anymore, people are always around via technology, you know what I’m saying? You can meet this chick at a bar and have a good ass night. Then you get her number, text her for a whole week and she’s hilarious and then when you invite her out for a date and sit across the table from her she has no personality at all because she had thirty minutes to think about what kind of funny thing she wanted to say. Bro, it’s like people aren’t even people anymore. People don’t have any personality to them anymore because they rely on emojis. It’s creepy sometimes.

TK: That’s real. On “Made to Luv” you said “She said I’m easy to love but harder to trust.” Why do you think trusting someone is more difficult than loving them?

B: Trust is everything, bro, a lot of times you start trusting somebody before you make up your mind to love them and sometimes you get caught up in the predicament where you love someone first before you trust them. A lot of times that ruins everything because you want to be able to trust somebody, I’d rather trust you before I love you, you know what I’m saying? Even if you’re in the talking stage of a relationship, you’re trusting that this person isn’t going make you look like a fool out here, they are what they say they’re going to be and then you can grow to love somebody like that. Occasionally you find a girl, she’s so beautiful, she’s funny, hilarious and you love her, but she do something to break that trust and now your image of her is skewed. But this song was written from the aspect of a man who tries his best to love a woman who was hurt by somebody else

TK: The final track, “Closer to You,” doesn’t necessarily sound like pop, but it doesn’t have the R&B sound that the other five records have. What made you choose to end the Unplugged EP like that?

B: I made “Closer to You” to pay homage to where I started musically with my guitar singing music like Daughters and The Beatles. I’ve been working to drop this project for close to five years. So the music that I was making five year ago aligned more to “Closer to You.” For a lot of people listening to this EP, it kind of came from left field because a lot of these songs were not my style. It’s a project of what I’m capable of doing, but with “Closer to You,” I was like “Let me end this EP in a way that makes sense to myself and to the people who waited this long to hear it.” I get a lot of texts like “Closer to You” is that song, where I’m thinking everyone loves “You Need It,” “Get Loose” or “Unplugged” but there are people like “Yo this sounds like you in 2012.”

TK: Now I noticed that you do a lot of different shows and open mics throughout the city, including your most recent show at The Juice Jam. How do you feel about the local music scene in Philadelphia?

B: I used to have my qualms with it, just to be honest. We’ve been doing this since 2013, and the first two years we’re waiting all day to perform two or three songs and we’re out. Last year and this year I’m meeting so many people at the same shows, looking for the same vibe, it’s almost like a community of people going from this show to this show. I feel like there’s a community of people who love great music who don’t care about the genre of music, as long as it touches them. That’s something I’ve grown to love about this city, we’re not just all rappers, R&B artists, some of us are mixtures of this an that and it’s really beautiful to see that. The music scene in this city for all the trash people talk is alive and thriving.