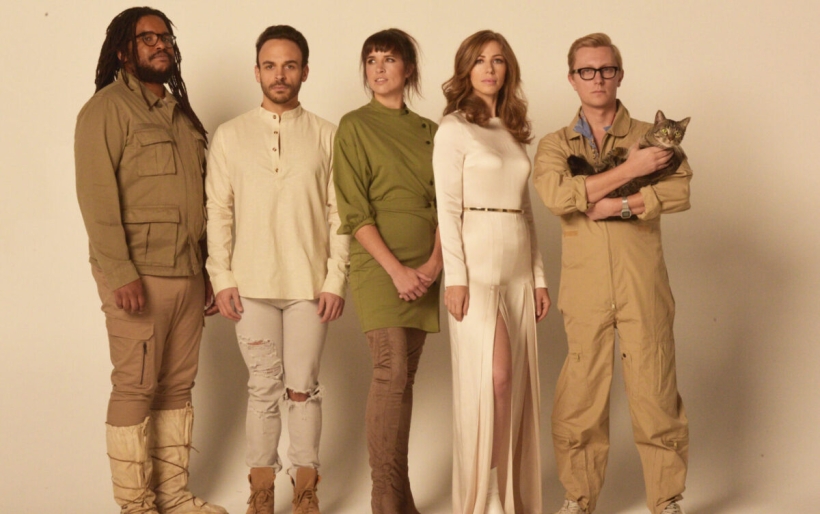 Often tagged as “retro” with a multi-genre emphasis on its folksy soul (or soulful folksiness) to go with its Lambert, Hendricks & Ross-on-Benzedrine-esque harmonies, Boston’s Lake Street Dive has been moving at a rapid fire pace since its independently-released debut with 2006’s In This Episode. Twelve years and several albums later, the quartet has honed its skills into something looser and airier, yet currently focused on a modern R&B tone on its brand new release, Free Yourself Up.

Perhaps we can blame a more-than-usual wealth of compositions and co-compositions from Bridget Kearney (fresh off her debut solo album, 2017’s Won’t Let You Down), or touring keyboardist Akie Bermiss stepping up to the plate as a formidable studio presence, or the band’s taking control of its own production with help from friend and engineer Dan Knobler. Drummer Mike Calabrese and Kearney clue us in before returning to Philly for May 12’s sold-out show at The Fillmore. (UPDATE: Lake Street Dive just announced a free concert at the Sherman Theater in Stroudsburg on Tuesday, June 19th; to attend, RSVP here.)

The Key: Mike, you are from Philadelphia. You guys have played in the area a bunch. Do you make the rest of the band do stupid Philly things when you’re in town?

Mike Calabrese: I don’t. That said, I should add that my parents – when we were first starting out and driving ourselves – are very often responsible for planning those local non-playing experiences.

Bridget Kearney: I can say that we have had our share of Wawa hoagies and a Coke.

Mike Calabrese: It is a pilgrimage of ours every time were in Philly.

TK: For someone from Iowa then Boston, your Philly accent on ‘hoa-gie’ and ‘Co-ke’ is uncomfortably solid.

BK: Thank you. Mike has us pretty well trained in that regard.

TK: You guys have had so many tags. What is the most ridiculous you have heard?

MC: We get ‘Lake Shore Drive’ a lot. Too much in fact.

TK: Many things have changed since In this Episode and several more things have changed just since 2016’s Side Pony…. most of which involve Bridget writing more and you guys producing your own album for a looser, breezier feel. How and why did all this happen, post-2016?

MC: There is a new paradigm in the band where we all collaborate on the writing more often. I didn’t write any songs here 100%, and instead went the collaborative route every time. The fact of the matter is – in this band – no matter how we choose to write, it has always been a group effort to arrange and bring life to them. Whether or not one person or two writes a song, when it comes to putting it on an album and developing it for the stage stuff… it’s irrelevant. We prefer to make it hard for listeners to distinguish among us. It’s not a plan or something we set out to do. But it’s an ‘us’ thing rather than one person thing.

TK: Bridget, considering what he just said, how did your solo album inform Free Yourself Up? And did you have to change how you wrote for yourself vs. the band?

BK: For sure. Bringing a song to the band gives my writing new life and makes it exciting; not that making my own music for my records isn’t thrilling. As far as my solo record goes…. All writing is a craft that you need to repeat to get better. The process of co-writing is the same. That co-writing gave me a better idea of what the rest of the band brings to the table. It really allowed me to get into their heads.

TK: The new album is centered on R&B. Why and why now?

MC: We hardly ever do that thing where we SAY or decide to focus on a stylistic route. I will say that I personally have been listening to a lot of modern R&B and artists such as Anderson.Paak, SZA and D’Angelo. The new torch bearers. I mean I wrote “Good Kisser” after I had been listening to the Soul Survivors’ “Expressway to Your Heart.” That’s total Sound of Philly. There’s definitely a little bit of that feel to the song.

TK: In my mind, Free Yourself Up is looser and sultrier than the last album, which was snug and tight and buttoned-up. In fact if Side Pony is Bob Newhart, then the new album is Richard Pryor. Why is that?

MC: Well, wow, first off. The simple answer is producing it ourselves allowed the album that feel. We did. Actually, we searched for a producer but simply ran into dead ends. Finally our label said all bands just produce themselves so why not try it. We were scared at first but then realized that there are no orders to follow. We were constipated creatively… on some past albums more than others. We learned so much but rarely applied any newly acquired acumen the process until “Free Yourself Up.” There we just kept throwing weird things at the album. Any and all trepidation was flipped on its head. And we became obsessed by throwing weird things at the songs and seeing what fit. Or didn’t fit. We had a lot of boundary pushing.

BK: I believe that so many of the criticisms that we received about our albums revolved around the fact that we never achieved the energy that we love so much about our live shows. So we did that by considering the imperfection of reckless abandon.

MC: Just as an example the first thing we did was a demo session – five songs – where we tested our skills as producers. So I believe it was the song “Hang On” which is an older song of Bridget’s. We did it carefree… a very live take. Threw stuff at it… the weirdness. And we tried to make it sound nicer. At the end of the day, though, the original was the best, the demo. Who puts the demo on the finished album? We do, now, because that is what felt best. Labeling it as a demo or as a studio version is irrelevant. That encapsulated how we would track the rest of the new album. And that’s cool.

Lake Street Dive headlines The Sherman Theater in Stroudsburg on Tuesday, June 19th; the concert is FREE, but you have to RSVP to attend, so do that now at XPN.org.