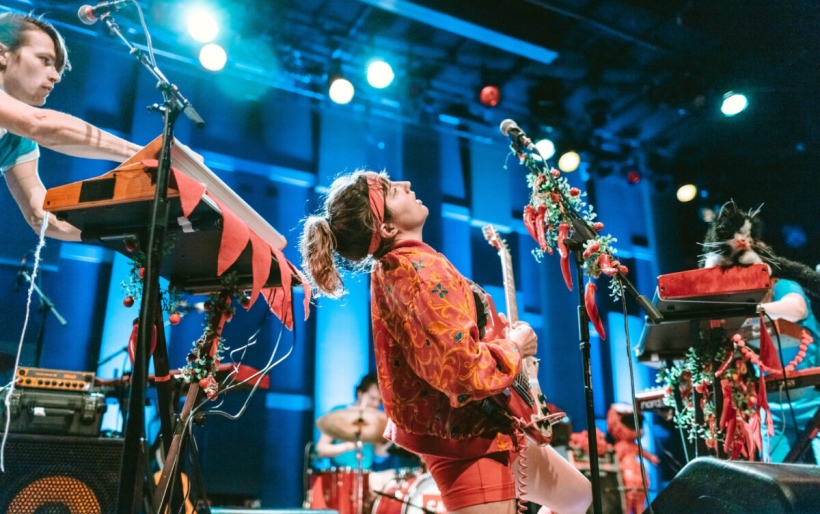 Through her transition from folk to self-made genre “schizodrift” (a self-styled blend of surf rock, country and folk), Caroline Rose has created a name for herself in recent years, attracting the attention of The New York Times Magazine, NPR, Pitchfork as well as us here at WXPN, who named Rose “Artist To Watch” for May. The NYC-based songwriter’s latest record LONER’s success is attributed to taking a more pop approach, but at the same time still staying true to her aesthetic self.

Rose’s new self-directed music video “Bikini” has a colorful 60s-70s game show-esque setting where she is surrounded by a variety of dancing women in bikinis. The video is humorous, but has a deeper meaning behind, as Rose explains below via press release.

“A lot of my aesthetic tends to be very tongue-in-cheek, so I wanted to take a serious subject, in this case misogyny, and just sort of turn it around to laugh at it. I think satire can be used as an incredible tool to take the power away from the powerful when necessary. It was important to me to make sure the video was body positive. When we think of ‘girls in bikinis,’ the tendency is to see tall white models with perfect bodies. I knew that would be missing the point of the song.”

Rose also appeared on World Cafe this week, performing three songs and talking to Stephen Kallao about the sonic shift between albums, the themes in her songs, and whether or not she actually smoked all those cigarettes on the album cover. Listen below.

The East Coast singer songwriter has been on the road, supporting LONER and has added several dates to the tour. She will be coming to Union Transfer on May 24th with alternative pop artist Maggie Rogers. In addition, Rose also announced a fall tour to support Rainbow Kitten Surprise. Tour dates posted below and you can find tickets and more information on the XPN Concert Calendar.

Watch the music video for “Bikini” below.