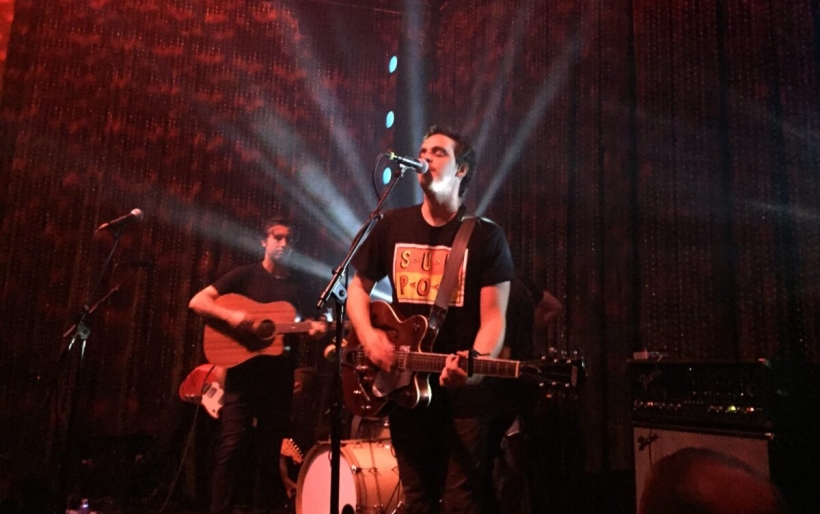 Melbourne-based five piece Rolling Blackouts Coastal Fever took to Johnny Brenda’s this past Thursday night for their second visit to Philadelphia. The band’s current month-long U.S. tour started with dates at both Coachella weekends, and ultimately lead the band to road trip across 30 states before closing out the U.S. leg in Philly, then flying to Europe for the second leg of the tour. Thankfully, the Aussie five piece still had plenty of energy when they stopped by JB’s to enchant the upstairs crowd.

As the clock stuck 11, the house spun George McCrae’s 1974 pre-disco hit “Rock Your Baby.” The disco ball‘s shimmering red lights cast upon the crowd as McCrae’s crooning faded, giving way for the band to take the stage. The disco ball would continue to paint the room in red, blue and green throughout the night as the band’s jangle pop infused summertime rock tunes dazzled the upstairs crowd.

The Melbourne-based quintet kicked off their set with “Clean Slate” from their 2016 debut EP, Talk Talk. In one sense, the lead track is quintessential Rolling Blackouts Coastal Fever: a trio of vocalists/guitarists contributing their own flavor to the mix, punchy upbeat punk drums, and a driving yet off-kilter bassline. The effervescent blend of neo-pop and sunny punk-tinged rock got the Thursday night crowd moving instantaneously.

Fronted equally by Fran Keaney, Tom Russo and Joe White, who all act as vocalists and guitarists, the band’s three voices intertwined with each other through narratives and call-and-response lyrics. Vocal parts that may have been lost in the mix stay intact in the band’s live set. Thanks to the trio of vocalists, ad-lib sounds like “shhk shhk” from mid-set “Wither With You,” and conversational phrases like “I’m having trouble making you out” from set closer “French Press” all appear throughout the band’s set. These vocal additions provide another layer to the band’s already dense sound, not to the point of saturation, but just enough vocal variety to match the varied instrumentals. The band closed the night a run of career-spanning songs, including lead single “Mainland” off upcoming LP Hope Downs, “Wide Eyes” from the band’s 2016 EP, Talk Talk, and 2017’s “French Press,” the track that initially landed these Aussies on my radar last year. The stretch of songs clearly defined the distinctions between Rolling Blackouts C.F.’s distinguishable eras, yet tied together band-defining similarities.

The huge, swelling hook and poppy guitar lead of “Mainland” marked what’s in store for June’s Hope Downs. The band performed five tracks off the upcoming album Thursday night, poppy singles “Mainland” and “Talking Straight,” as well as the rocking, yet-to-be-released “An Air Conditioned Man,” a mid-set stunner that makes me wish the album was out already.

The set came to a rousing close thanks to “French Press,” the band’s landmark long-distance belter off their EP of the same name. Lead by Russo on vocals and guitar, the extended live version of the song featured twin piston, concurrent guitar solos provided by Russo and White. Swelling and crashing guitar riffs filled the room up the minutes. After a split second off-stage break, the band returned to perform upbeat New Wave-esque “Colours Run” for their encore. The sub 3-minute track may have been the shortest encore I’ve witnessed, but was the perfect song to end the evening. A fan favorite off last year’s The French Press EP, the crowd swelled and sang along for one last time Thursday night.

View the full setlist below, and preorder Hope Downs through Sub Pop.