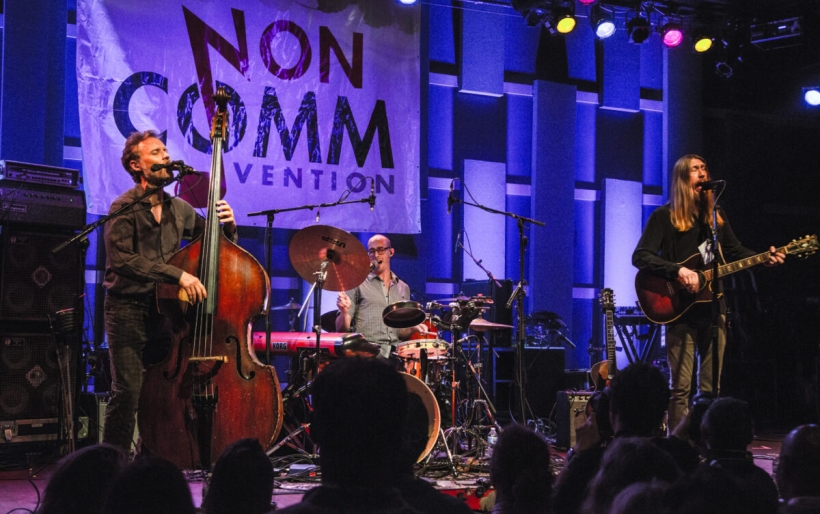 Nashville natives The Wood Brothers played an epic folk set to open the downstairs stage of NonCOMM’s night three. This folk powerhouse has just released their sixth studio album, One Drop of Truth, and plans on returning to Philadelphia on August 28th to play at Longwood Gardens.

This band is, in my opinion, the most unique group that has taken the NonCOMM stage, and after watching them jam for thirty minutes, they might be my favorite group of the whole fest. Night three is only just getting started, but they’re going to be a tough act to beat.

Though they have quite the extensive catalog, The Wood Brothers only played songs from their recent releases; most tracks came from their newest album. To open, they played “Keep Me Around,” and the slapping double bass introduction from Chris Wood was quite enough to hook me. Then, one by one he was joined by brother Oliver Wood on electric guitar, and percussionist Jano Rix, who rhythmically beat an acoustic guitar.

This band gives off a very distinct persona. Rix’s acoustic guitar and drum kit are both decked out in a way that would only suit him as a performer, and no one else. His guitar is fashioned with several percussive tricks, and his drum kit even had something that looked like a metal pot attached to one of the stands. If anything, The Wood Brothers are lacking nothing in the originality department.

Following the stunning opener were tracks like “River Takes the Town,” “Sparkling Wine,” Happiness Jones,” and a finale of “Honey Jar.” All of these songs highlighted Oliver Woods’s gravelly yet clear voice and the trio’s effortless harmonies. This was a happyperformance, and it’s exactly what the beginning of the end of NonCOMM needed. Check out photos and listen back to their set below. 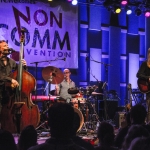