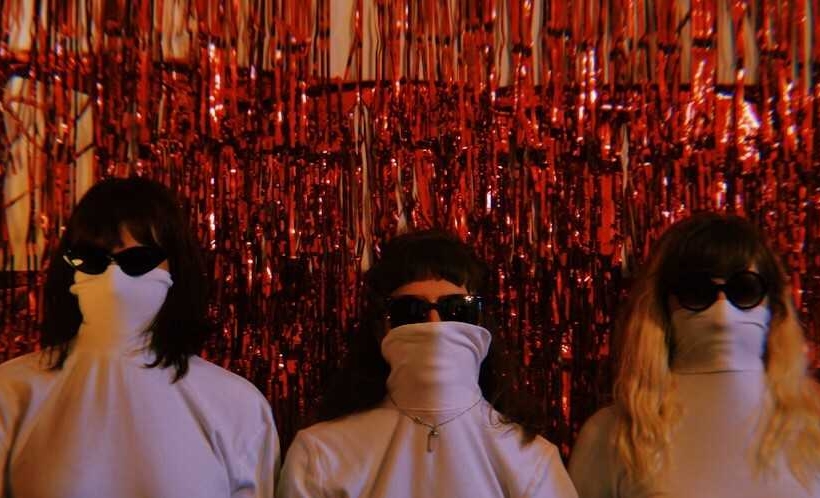 Blowdryer | photo courtesy of the artist

When fuzzed-out indie rockers Bleeding Rainbow broke up in 2015, a ton of people were really bummed out, including myself. We consoled ourselves with the fact that the members were in a whole mess of other cool bands including Telepathic, Pinkwash, and Blowdryer.

While the first two have thankfully been releasing new music on a fairly regular basis, Blowdryer – Sarah Everton from Bleeding Rainbow on guitar, joined by and Robyn Campbell (of Permanent Body) and Dominique Montgomery, who switch between bass and drums – quickly put out an EP, the Deprogrammed tape, but had been silent on the release front since then. But the long wait for new recordings is finally over!

Their brand new self-titled LP, released today, is 10 tracks of incredibly catchy and clever post-punk that is a veritable showcase of the band’s myriad interests. There’s a strong Devo influence going on, some Wipers, Bratmobile and Beat Happening, Tiger Trap, and so much more. But when it comes down to it, anyone can make a record that just apes those bands. What Blowdryer has done is distilled the best parts, their favorite parts, and channeled that into their sound and created something that is very much their own. Did I mention that it’s really fun? It’s really, really fun.

We caught up with the band to talk about the new album, the video they made for “Intent”, and what the future holds.

The Key: How long have you been working on the new record? Are these all songs you’ve been playing since the EP came out?

Blowdryer: A few of the songs were written right after we recorded Deprogrammed, but once we decided we wanted to make a new album, then we wrote the rest. We tend to work in bursts; we’re not really trying to get famous, so that gives us the room to kind of go at our own pace. I think we all got antsy to record, like waiting a few years made us really eager and excited to do it again, so then all the songs came together fairly quickly.

The Key: Where was the album recorded and who did the cover art?

Blowdryer: We recorded with Rob Garcia (Sarah’s spouse/Telepathic bandmate) in their basement, the same way we did Deprogrammed, and none of us would really want it any other way. Rob always does an incredible job and we all feel comfortable with him, and we record (mostly) live, so the whole thing feels like an extended fun band practice. Sarah does all the artwork for Blowdryer! We like to keep it in the family.

The Key: What’s the deal with this perfectly bizarre and awesome video?

Blowdryer: Dawn Riddle (of Bad Canoes, the best band) made the video, and we gave her free reign to do whatever she wanted. All we really said was to think about Devo videos while she worked on it, which she maybe did. But it doesn’t even really matter.  She makes awesome weird video art and we totally trusted her to make something we’d like, and she crushed it!

The Key: In what way has the band changed since the Deprogrammed EP? What does the future hold?

Blowdryer: Deprogrammed was influenced pretty heavily by bands like Sonic Youth and Wipers. We were figuring out our sound, focusing more on grungey post-punk stuff. Before we even started the band, we talked about wanting to sound like Devo and B-52’s, but that comes through a lot more now than in our earlier songs. There’s no more Big Muff, everything is a little punchier now and most of the songs are short, there’s not as much extra noise. When we write a song and it’s under two minutes, we’re always happy. As far as what the future holds, we’re playing in Bethlehem at the beginning of June for Daytime Cleaners’ record release. And then, who knows? Probably band tattoos.

Blowdryer plays Everybody Hits tonight to celebrate the release of their self-titled tape; more information on the show can be found at Facebook.