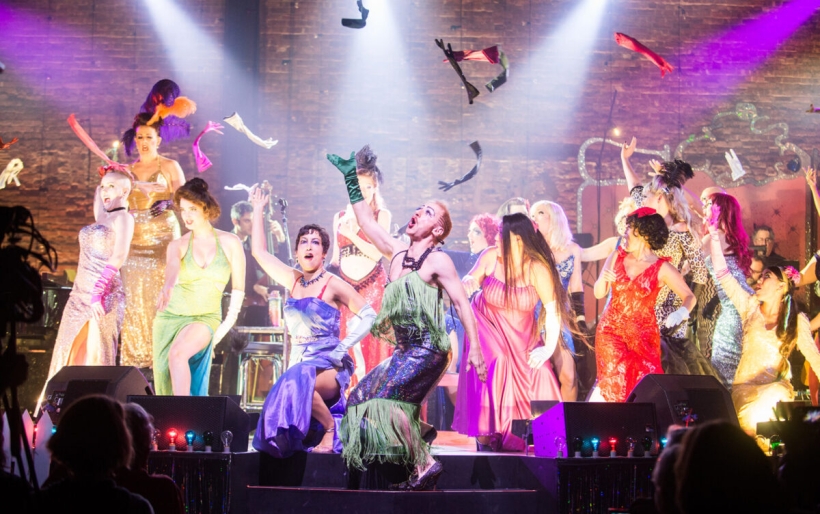 TSOPIFA: The Sound of Philadelphia’s International Festival of the Arts

Ever since the start of the Kimmel Center-based and curated Philadelphia International Festival of the Arts – or PIFA, as it is best known – innovations in sound and tone have touched its event listings. “Music has always been a crucial part of PIFA, whether it is the locals we book or the international acts we program,” says Jay Wahl, the Kimmel’s Producing Artistic Director and the creator-curator of PIFA which starts May 31 with a groovy gala at the Center.

With the mission statement of 2018’s PIFA being a search for community, empathy, and to “plug into some sort-of current and take the pulse of the city around social questions,” Wahl has allowed a handful of fascinating artists into the festival’s fold.

Take for instance drag performance artist and MacArthur Genius Grant recipient Taylor Mac, whose A 24-Decade History of Popular Music, plays in two 12 hour increments (1776-1896 is covered during the June 2 session with 1896-Present on June 9, both starting at noon at the Kimmel Center) and is being teased as democratic, interactive “Ring Cycle for the 21st Century,” with the help of 24 musicians, 100 local performers (including Martha Graham Cracker, Toshi Reagon, Dan Zanes and Urban Bush Women) and countless costume changes.

“Popular music seemed to be the right form (in which to discuss issues of community through history) since communities are building themselves up as a result of tearing themselves apart,” said Mac. “They’re using imperfection as a way to build themselves – people are dying from the AIDS epidemic or people are being enslaved or people are dealing with the industrial revolution. No matter what they are building themselves up as a result of all this. So it felt as if imperfection was being used to strengthen community So, what is the art form that best represents a county’s strength or a community’s strength? Popular songs. Those songs brought people together. They rallied people to a cause that you could cerebrate together or mourn together. They use simple chord structure – A b A b – and the story telling is basic enough so to reach the people.”

For France’s Compagnie Transe Express‘ Crystal Palace (June 1- 10, along the banks of the Schuykill in Fairmount Park), performers and musicians dangle in mid-air in what Wahl called a “dance party in the sky.”

Nicole Ragaigne, the International Production Manager of Transe Express, is a PIFA vet , having performed for PIFA’s 2011 iteration. “This new show was specially created for the PIFA, so everything is quite different than our usual,” said Ragaigne.”Our signature elements, such as a huge aerial structure, ‘life music’ and circus performances. But we have new elements, as performers on stage and local dancers performing with us, and the wish to involve the audience in the show, more than ever.” As for playing into PIFA’s notions of empathy and community, Crystal Palace is all about interaction on a large scale. “We want to create a giant dance party, where everybody is invited to dance along our performers under the flying chandelier, where the band performs. The audience will be asked to learn the choreography of one song and participate in a Flash Mob. So it will be a great thing for the community, bringing lots of people together in a fun way. And at the end we incorporated a version of ‘The Sound of Philadelphia’… that’s our way to say thanks to your city.”

Rare Essence, the “Best Go-Go Band” in Washington D.C., is bringing its dirty, brassy funk to the Kimmel’s PIFA for what Andre Johnson – guitarist, vocalist and founding member – claimed is the horny ensemble’s first gig in Philly in over a decade. “We’ve always been a community-based group, and have been performing around the DC area for 42 years with that communal vibe at the forefront,” said Johnson. “The inner city community experiences are pretty much the same across the country. With us growing up as inner city kids and being one of the pioneering artists in this genre of music, we’ve gone through just about everything that living in those types of communities has to offer. It is important for us to share our homegrown genre of music – the heartbeat of the nation’s capital – with other city communities outside of our own.” Along with performing a song or two from go-go legend Chuck Brown, Johnson said to watch out for Rare Essence’s signature cut, “Lock It,” as it is that track that “personifies the actual live experience.”

Readers of A.D. Amorosi’s work at The Key will no doubt recall his own endless fascination with the music and idealism of Frank Zappa. Austria’s Studio Dan ensemble and founder/boss, Daniel Riegler has had that same frank feeling since 2005 and the inception of his improvisational orchestra. For that reason (and for its second appearance in the U.S.), Studio Dan present Inventive Mothers: A Tribute to Frank Zappa at SEI Innovation Studio with the promise of being “as mad as we always are,” claimed Riegler, making mention of the communal sensibility of PIFA. “We are entering the stage as a collective of 14 people, we ARE a community. Our work needs collective thinking, empathy and communication; on and off stage. I am sure you can feel this in our show.”

Along with the highlight of one of its rans playing a bicycle, Riegler stated that a highlight of its “Mothers” program will be Zappa’s composition “The Eric Dolphy Memorial Barbecue,” as it combines all strengths of the Studio Dan ensemble, and maybe even PIFA at large. “You will find elements of jazz, rock, contemporary music and improvised music; beautiful melodies, crazy harmonies, wild rhythm, grooves… and lots of humor. But honestly, there is no signature song. Playing this program is a feast. And we are in heaven.” Inventive Mothers: A Tribute to Frank Zappa | photo by Nicoletti | courtesy of PIFA

PIFA runs from May 31st through June 10th. For additional shows and information go to KimmelCenter.org.