The Longshot brings Billie Joe Armstrong back to the basement in a sweaty, glorious First Unitarian gig - WXPN 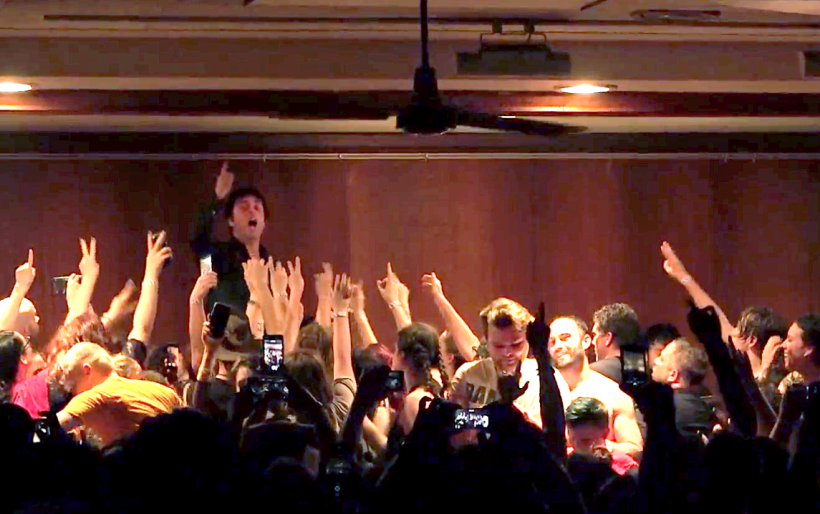 The Longshot | still from video

The Longshot brings Billie Joe Armstrong back to the basement in a sweaty, glorious First Unitarian gig

It’s sort of surreal to see Billie Joe Armstrong play in the Church basement. Not that he hasn’t played venues like this while Green Day was starting out, but to see the guy who’s sold out countless arenas and festival grounds play on top of the alphabet carpet in front of a couple hundred people is still odd. What’s even more odd is not hearing Green Day songs.

Armstrong announced his new project The Longshot and its debut album Love is For Losers as a bit of a surprise, with no one really knowing whether it was a solo effort, a project with his sons or with new band members. The retro-garage rock sound he had been toying with since Green Day’s 2012 lukewarm-at-best trilogy of albums Uno, Dos, and Tre (and even dating back to their not-so-secret side project Foxboro Hottubs), finally felt a bit at home with this new project.

It gave Armstrong an opportunity to add some kitsch and playfulness without the constant looming shadow of lofty expectations and Green Day fans waiting to tell him why he’s not punk anymore.

And playing a string of shows at tiny venues seemed to give Armstrong a chance to go back to his youth without any feeling of forced nostalgia. He was really having fun, and he really seemed happy. In the wood-paneled sauna conditions of the Church, Armstrong proclaimed that it was “one of the coolest venues” he’s ever played in his life.

“This place is a church, a gospel choir upstairs, and now a punk rock show. Let’s go to punk rock church.”

Armstrong’s punk rock church involved covers of obvious influences like the Ramones, Replacements and the Damned. To see the 46-year-old’s youthful energy during “Rockaway Beach” and “Bastards of Young,” while keeping in mind his recent struggles with sobriety, felt good. It felt like watching an old friend return to doing the things they love and feeling good about it. The Longshot | photo by Brendan Menapace for WXPN

Things got rolling with New York garage punk band the Trash Bags. They blasted through about a half hour’s worth of strutty punk, taking minimal breaks between songs to chug some water, comb back sweaty hair and take off their ill-advised leather jackets.

By the time The Longshot took the stage at about 10, the heat was intense, but the crowd was as condensed as you can pretty much get. Even if you were standing in the back and couldn’t see Armstrong too well, the cheer and the paparazzi-like amount of cell phone pictures when he walked out was all you needed to know that he was there. They opened with the huge “Kill Your Friends,” a bottom-half track from Love is For Losers. To the surprise of no one, the faithful knew every word already.

This is absolutely the same Billie Joe show that I saw in arenas for the first time 14 years ago—the same amount of crowd interaction, the same amount of energy, the same amount of charisma. The difference is that the songs weren’t the same. They sounded similar, obviously. If you would’ve told me it was all new Green Day material sans Mike and Tre, I would’ve believed you. But, it’s not. And that’s probably a good thing.

There is no precedent for The Longshot. It’s the best part of a side project. He can just make fun songs with fun hooks and play small, sweaty venues for the fun of it, like the ones he grew up playing without any risk of tarnishing his permanent record with Green Day. And that’s not meant to downplay the songs on Love is For Losers one bit. They’re really solid, which speaks to the focus that he’s seemingly found once again (if you want to argue that he lost it for a bit).

Right now, for Billie Joe Armstrong, treating basement venues and small clubs like the enormous arena shows that he commands with ringleader-like control and playing a few new tunes, as well as some of his old favorites, might be exactly what he needs. It’s not to say that Green Day is stale or over or anything else other music writers might want to force into a greater narrative.

It’s just that right now, for a now-sober Armstrong, taking the pressure off of himself and his larger-than-life reputation in favor of taking a little sabbatical to play simple, hook-laden originals and a little punk rock karaoke might be exactly where he needs to be right now. It showed on his face, and it showed in the performance.

Green Day fans should be happy for him and excited for what comes next.