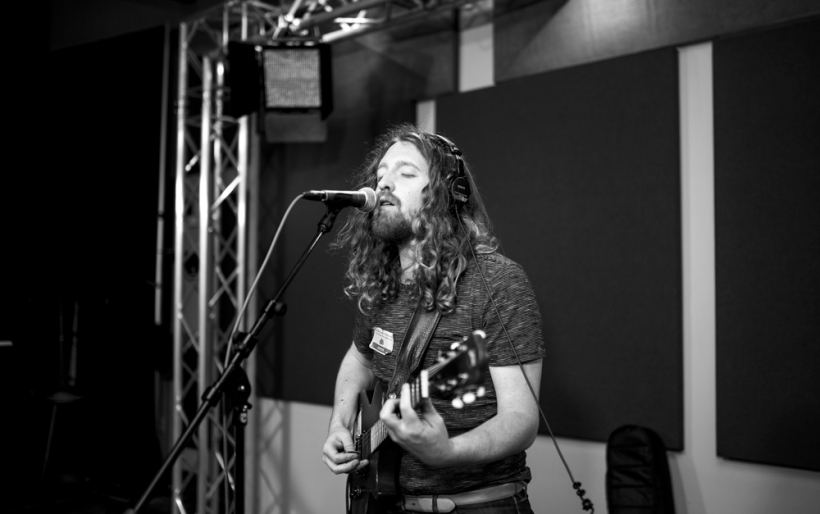 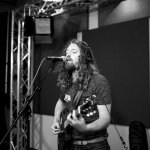 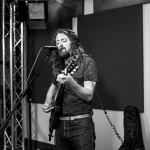 There was a time that, whenever I’d write about Philly singer-guitarist-multi-instrumentalist Dominic Angelella, I’d begin by launching into a litany of local and national acts he’s been involved with over the past ten or twelve years. I’m not going to do that here — at this point, there are too many of them. And beyond being an exceptionally busy person in the supporting cast of other local and national bands, Angelella is a tremendous songwriter in his own right, and this spring he blessed us with a whole new batch of tunes.

Road Movie came out in May on Lame-O Records, a short / sweet followup to Angelella’s solo debut Goodnight, Doggies. Both projects fall in that longer-than-an-EP, shorter-than-an-album zone, but where Doggies leaned more subdued and contemplative with a handful of rockers in the mix, Road Movie flips the script, keeping the energy high and the riffs tasty for the most part, and creating an inviting entry point into Angelella’s catchy vocal melodies and clever lyricism.

He’s observational, as we hear in the driving punk rock of “Red State,” a song about the nervous uncertainty permeating the world around us. He’s deeply personal, as well; the aching “Rebecca” is a homage to his late grandmother, where Angelella celebrates the connection we continue to have with our loved ones after they leave their human form. And there’s the brilliant subtweet of a song “One Day (I’m Going To Quit),” which captures the eternal dilemma of musicians and creative folk alike, the tension between determination and dejection and how long we can toe that line.

On record, those moments are dressed up in skitzy drums, playful keyboard accents, fuzzy amp tones and other nuanced bits of production atmosphere. For his Key Studio Session, Angelella played solo electric, and the performance is a testament to the strength of the songs. The hooks and melodies come through with gusto, and the rumbling, rattling, not-quite-dirty-not-quite-pristine tone of his chords and licks have a robust feel.

The session was a blast to work on. Dom arrived wearing a jury duty sticker, having spent all afternoon doing his civic duty, and he rocked it for the entire performance. He grabbed a sharpie and X-ed out the “Soft Alpha” tag on his guitar mid-set; it’s been taped there for a while now, initially conceived as an embracement of a more emotionally in-touch sort of masculinity, but as the session moved along and we set up cameras for the video shoot, Angelella decided that sensitive patriarchy is still patriarchy, and he wanted to send a new kind of message. After we wrapped, Angelella spent an hour with production assistant Rachel Del Sordo and myself, hanging out in the studio talking about Hop Along, Donald Glover, the 2016 election and more.

Below, listen to Dominic Angelella’s Key Studio Session in full — it showcases three tracks from Road Movie, as well as Doggies‘ beautiful “Church Zero.” The new record can be grabbed from the folks at Lame-O, and though he doesn’t have any solo shows on his calendar at present, you can nevertheless see Angelella in action a couple times this week. On Friday, he plays the basement of the First Unitarian Church, sitting in on bass for local fuzz rockers Permanent Body as they open for Ovlov; this weekend, he’ll be in the Woodlands of Dover, kicking off his summer gig playing bass for Lucy Dacus. Details on both can be found at the XPN Concert Calendar.