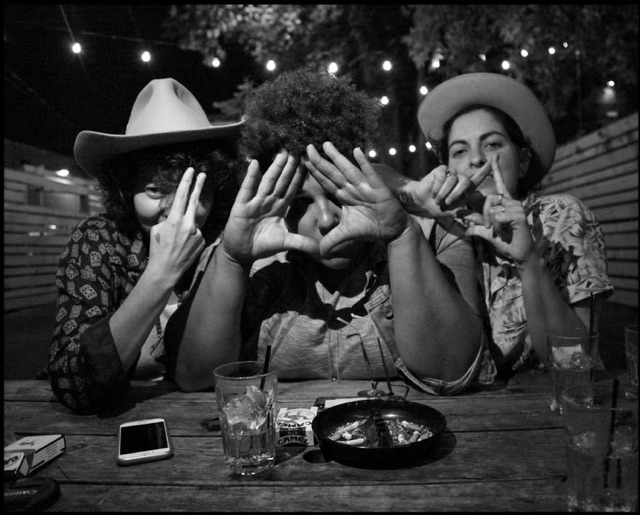 Bermuda Triangle is the all female power trio from Nashville featuring Jesse Lafser, Becca Mancari, and Brittany Howard of Alabama Shakes. These three musicians have been good friends for years, and they each have other musical endeavors outside the band. Divine intervention brought all three women to various porches in Nashville, where they passed around acoustic guitars and fooled with harmonies. Eventually, these organic jam sessions turned into the passion project that is Bermuda Triangle.

Recently the band met up with Ann Powers for an interview on World Cafe, where they talked about how the band came together, their creative processes, touring, cheese plates, and more. They also gave stellar live performances of their two singles “Suzanne” and “Rosey” as well as two unreleased tracks, “Tear Us Apart” and “Bermuda Triangle,” the band’s theme song. Listen below.

With only two official singles released, the band has been nevertheless selling out shows on tour. Their music combines harmonies, acoustic and electric elements, drum machines, and a variety of influences to produce a unique sound fueled by pure creativity. Bermuda Triangle is very DIY as many of the members have picked up instruments they did not once know how to play. Howard is currently learning the bass, and Mancari is exploring with drum machines and other tech.

Their track “Suzanne” is one my personal favorites. The song features a samba beat that Howard found programmed into an electric organ she had at home, which led to the bossa nova inspired sound of the track. That laying-on-the-beach feeling is amplified by the pronounced harmonies, and things get more fun and experimental when the hip hop drum pattern kicks in. The song has very few elements, but it doesn’t feel empty at all. The beat drop around 2:05 is super satisfying as we sink into a stadium reverb.

Bermuda Triangle’s sound is refreshingly unique and speaks to their ethos of creativity and experimentation. With the power of friendship and creative freedom, these women are creating a fresh sound that’s sure to captivate.

Check out Bermuda Triangle’s “Suzanne” down below, and be sure to catch them live at the XPoNential Music Festival. More info on the festival can be found here.